On May 24th 2021, Haaretz published a comprehensive article by Shlomo Sand, in which he tried to analyze in retrospect the latest round of violence between Israel and the Palestinians. Sand blames Israel – and Israel only – for the initiation of the turmoil:

The latest flare-up in Gaza was sparked with the help of two matches. The first resembles the one that ignited the uprising in October 2000: a disrespectful attack at the Al-Aqsa Mosque, which is not only a key religious site but also a clearly nationalist symbol.

Did the flare-up really start due to “a disrespectful attack at the Al-Aqsa Mosque”?

The answer is no. The chain of events indicates not only that the violence was a pre-planned Arab initiative; it was instigated despite a series of steps that the Israeli government took to calm things down, steps that had a heavy political and public cost.

This is the sequence of events:

The wave of violence in Jerusalem – and the Jewish-Arab tensions that ensued – began almost a month before the situation in the city led to a war in Gaza. On April 15th, a Palestinian youngster from Jerusalem uploaded to his TikTok account a video showing him without provocation harshly slapping a Jewish religious teen riding in the city’s light rail.

Soon afterwards, attacks on Jewish bystanders became a trend. Many young Arabs started uploading countless – dozens if not hundreds – of videos to TikTtok in which they are seen attacking policemen, humiliating ultra-orthodox passers–by, and beating them with severe violence.

Haaretz was largely silent on the phenomenon until April 22, after the Jewish extreme-right organization Lehava held a parade in the eastern part of the city, in which racist slurs against Arabs were chanted. Before then, the paper addressed the TikTok violence just once. 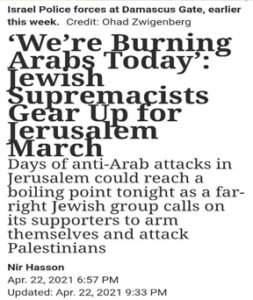 Even then, Haaretz hid the reason for the tension from its readers. When its Jerusalem correspondent Nir Hasson was criticized for the blatant omission, he responded on the TikTok terror: “those are ugly incidents but not exactly the worst terrorism we’ve seen… a slap, throwing a cup of coffee and a few stones are not breaking news…”

The Jerusalem tensions that were initiated by the attacks against Jews led, on April 24th, to the firing of 36 rockets and mortar shells from the Gaza Strip into southern Israel. This barrage was met with a very mild Israeli response, with the intent of preventing further escalation.

One week later, on April 30th, Palestinian Authority President Mahmoud Abbas announced he was delaying the Palestinian elections, which should have been held on May 22nd. Hamas, which was expected to perform well in the elections, called Abbas’ announcement ‘a coup’ and added that if the elections were cancelled, Israel would be held accountable. The organization’s spokesperson stated:

Postponing the election is not justified and we oppose it. [This is] … a surrender to the will of the occupier. There is an opportunity to turn this refusal into an open popular campaign against Israel in Jerusalem. [emphasis added]

And so the popular campaign began; the legal battle in Sheikh-Jarrah was the pretext that Hamas initially used, while the Israeli government tried to prevent the ensuing escalation.

On May 7th, at the request of the Prime Minister Netanyahu and the Minister of Internal Security Amir Ohana, MK Itamar Ben-Gvir vacated the parliamentary office he had opened in Sheikh Jarrah (although he had the legal right to keep it open).

The next evening, on May 8th, the ‘Laylat al-Qadr’ prayer was held at the Temple Mount. It quickly turned into an extreme riot that included hurling stones, rocks and Molotov cocktails which were pre-prepared on the Mount and thrown at policemen, many of whom were injured.

The riot was planned in advance, among other things by transporting thousands of extremist Islamic activists from northern Israel to the Temple Mount.

The next day, May 9th, Haaretz correspondent Nir Hasson reported that stones were hurled at the Western Wall Plaza.

The same day the Israeli government took another step to calm the situation, by requesting the Supreme Court to postpone the hearing on the eviction of the Palestinian families for non-payment of rent from Jewish-owned houses in Sheikh Jarrah. It should be noted that the schedule of the legal proceedings on the matter were set long in advance, by the court.

On May 10th, the government took another drastic step towards conciliation, despite the heavy public cost involved: it announced the closure of the Temple Mount for Jews for at least a week (eventually, the closure lasted for 19 consecutive days).

The same day, Prime Minister Netanyahu made an additional decision to calm the tensions – he ordered to change the Jerusalem Day’s Flag Parade route.

Later that day, which was Jerusalem Day, the Flag Parade was diverted from its regular route.

To review, in order to deescalate the situation and maintain calm:

1.) Israel’s reacted with restraint to volleys of Hamas missiles two weeks before the blowup.

2.) The Israeli government closed the Temple Mount to Jews

4.) The Supreme Court hearing on the Sheikh Jarrah case was postponed

After all this, Hamas made it clear that it would use the postponement of the Palestinian elections to “open a popular campaign against Israel in Jerusalem,” and on that day of May 10th, Hamas launched a heavy barrage of rockets on Jerusalem.

Immediately after, the Arab anti-Jewish violence in Jerusalem spread throughout the country. In mixed Jewish-Arab towns such as Lod, Acre, Jaffa and others, hundreds of Arabs gathered to attack Jewish passers-by, throw rocks at driving cars, vandalizing and burning Jewish-owned businesses, houses, vehicles and synagogues. Several  lynchings also occurred.

This post was corrected on July 14 to acknowledge Haaretz’s April 20 story on TikTok violence.