Of late, the Forward seems to be on an ongoing quest to find new ways to surpass previous lows. Just recently, the magazine was caught gaslighting readers with the claim that the phrase, “‘From the River to the Sea’ doesn’t mean what you think it means.” Now, the magazine has gone further and printed an opinion piece endorsing housing discrimination against Jews. (“Palestinians Are Right To Outlaw Selling Land To Settlers,” January 4, 2019.) 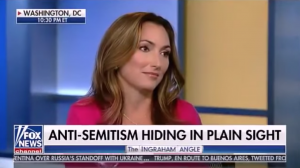 The author, Code Pink activist Ariel Gold, recently embarrassed herself in an appearance on FOX News when she claimed that “we have white nationalism in the Senate.” Pressed for an example of a white nationalist Senator, she named Black Lives Matter activist Shaun King. (While she later clarified that she meant Representative Steve King, he is not a Senator.) Previously, Gold has come under fire for bringing anti-Israel agitator Bassem Tamimi to a third grade classroom in Ithaca, New York, to inspire eight-year old children to become “freedom fighters for Palestine.” She can also be seen in video posted on the Legal Insurrection blog calling for an intifada, and chanting “hey hey, ho ho, Zionists have got to go.” Yet, for the Forward’s editorial staff, such extreme displays did not disqualify Gold. Instead, the publication gave Gold another platform.

Organized housing discrimination based on race or ethnicity was banned in the US in 1948, and rightly so. Gold, however, seizes on a contested property transaction in which all parties had access to the Israeli courts in order to justify the Palestinian Authority’s recent arrests of individuals who sold land to Jews.

More settler homes, especially inside flashpoint cities like Hebron and East Jerusalem, inevitably mean more checkpoints, more soldiers, more closed military zones, and more violence. With each home occupied by settlers, Israelis and Palestinians move further away from peace, further from a solution, and the occupation is entrenched, along with the Apartheid-like conditions in the West Bank that grant Israeli Jews citizenship but not Palestinians.

So when Palestinians sell their homes to Israeli Jews, they are harming their fellow Palestinians in a very real way.

This specious argument ignores the fact that these checkpoints and soldiers are a result of the terrorism and violence that the Palestinian Authority government both incites and pays for. It also ignores that terrorism pre-dated the Israeli military presence in the West Bank. If a Jewish minority could live in peace in the West Bank, free from terrorism, there would be no need for these checkpoints or soldiers. Gold’s argument ignores Palestinian intolerance, blames the victims of violence for defending themselves, and demands segregation as a response to terror.

Gold forgets an important parallel from American history. When African Americans integrated US schools, they, too, faced immense hostility. Ruby Bridges required protection from federal marshals when she desegregated a New Orleans elementary school in 1960. The US government understood that its role was to protect the civil rights of the minority, not to reward the intolerant by giving in to their demands and effectively allowing mob rule.

Gold also ignores that Hebron (the location of the Tomb of the Patriarchs, which she calls a “heavily occupied West Bank city”) and eastern Jerusalem historically had large Jewish populations. Hebron was ethnically cleansed of Jews by the British after a vicious pogrom in 1929 by Hebron’s Arabs and further riots in 1936. Eastern Jerusalem was ethnically cleansed of Jews by the Jordanians in 1948. Today in the West Bank and Jerusalem, just as in the US in an earlier era, a military or law enforcement presence is needed to protect those returning to these areas because of the intolerance and terror that continues to be directed towards them.

Nor does Gold seem to have a clear sense of her own end-goal for the area. On the one hand, she complains of “Apartheid-like conditions in the West Bank that grant Israeli Jews citizenship but not Palestinians.” Asking for Israeli citizenship rights for West Bank Palestinians is, in effect, a call for a single, binational state. Yet, Gold cannot countenance Jews and Arabs living side by side. Does she believe in coexistence, or not? Perhaps the answer is revealed when she writes,

[I]t’s not because their buyers are Jews that these Palestinians are being penalized for selling land, but because their existence in the West Bank is part of a larger political conflict that has terrible, tragic effects on other Palestinians.

If Palestinians could coexist with a Jewish minority in a future state, there would be no “terrible tragic effects.” Gold, however, is troubled by the Jews’ “existence” in the West Bank.

In Gold’s worldview, everything bad that happens to Palestinians seems to be the fault of Israel. While she pays lip service to PA human rights abuses against Palestinian people, she somehow manages to blame even this on Israel: “At the end of the day, the corruption of the PA, and the injustice it metes out against Palestinians, are enabled and exacerbated by the Israeli occupation.” The internationally accepted definition of anti-Semitism includes, “accusing Jews as a people of being responsible for real or imagined wrongdoing committed by … non-Jews.”

Gold implies that Israel is to blame for the fact that Israeli Arabs living in eastern Jerusalem don’t have Israeli citizenship, despite the fact that citizenship is available to them if they apply for it. Gold asserts that, “since 1967, Israel has revoked the residency of 14,595 Palestinian Jerusalemites.” But even the Human Rights Watch report from which Gold appears to have gotten this figure (she doesn’t name her source) notes that Israeli authorities justified these revocations on the grounds that the individuals were either no longer living there, or were suspected of being involved in terror activities, or had family members suspected of being involved in terror activities. The same report also acknowledges, “A path to citizenship exists for Palestinian Jerusalemite permanent residents, but the vast majority chose not to pursue it….”

Let’s not pretend, as [US Ambassador David] Friedman wishes us to, that [Palestinian American Jerusalem resident Issam] Akel has been sentenced [by the PA] for an inconsequential attempt to sell his home to an Israeli Jew in the pursuit of peace and coexistence. The sale would have placed another fanatical settler family in a prime East Jerusalem location at heart of the conflict. And his motivation was clearly to escape the punishing occupation of East Jerusalem Palestinians.

As we are rightfully shocked at the length of Akel’s jail sentence, let’s also not forget — especially in this time of Israeli elections — that it’s Israel that ultimately holds the keys.

It’s unclear how Gold knows what Akel’s motivation was, or whether his buyers were “fanatical.” Most property sales have as their motivation the simple goal of receiving financial gain for property that is no longer desirable to the seller. More bizarre is her assertion that Israel “holds the keys” to Akel’s jail sentence – yet again, blaming Israel for the actions of the Palestinian Authority.

The fact that the Forward would lend its platform to someone like Gold raises eyebrows. But even when the publication prints pieces from authors with relative stature the content can be outlandish. One example is a recent missive by Peter Beinart. (“Young Anti-Zionists: Be Uncomfortable, Like I Am With My Zionism,” December 26, 2018.) “If you’re going to be an anti-Zionist, be a good one,” the letter instructed young people. Imagine he’d written to Shaun King Senator Steve King Rep. Steve King, “If you’re going to be a racist, be a good one.” Such a line would never see the light of day in any reputable publication.

As noted above, CAMERA previously critiqued another Forward opinion piece that attempted to gaslight readers with the false claim that the call to replace Israel with an Arab majority state is a peaceful one. Unfortunately, the response of the Forward’s opinion editor was to ignore CAMERA’s substantive critique and instead deflect by calling the organization racist on Twitter, essentially demanding that her author, a tenure-track professor at the University of Arizona, be granted immunity from criticism due to her gender and ethnicity. We can only hope that this time she will consider the substance of what we have to say.