It’s one of the most fundamental principles of the system of private property: Tenants must pay rent, or face eviction. That is the case here in the U.S. just as it is in Israel. Yet, this basic piece of common sense is lost in most of the reporting on the current situation in Sheikh Jarrah, also known as Shimon HaTzadik. The issue is essentially a private property dispute, that has been politicized to forward an anti-Israel narrative, and is being manipulated on an international scale.

The Times of Israel quotes one of the residents who is at risk of eviction, Abdelfattah Eskafi, admitting that he has not paid rent on his property, and that his non-payment is for ideological, not financial, reasons. “We can’t accept such a thing, although of course we know it’s a risk,” Eskafi told Times of Israel.

The Times of Israel further reports that just a few days earlier, the Palestinian Arabs at risk of eviction were offered a compromise of remaining on the property as long as they paid rent, but they “again declined, saying they do not recognize the right of the Jewish Israelis over their homes.”

NGO Monitor explains that, “according to a 1989 High Court decision, and re-affirmed repeatedly in subsequent cases, as in the case of any tenant living on someone else’s property, residents … were required to pay rent to the organizations that owned the properties. Their failure to do so, along with instances of illegal building and illegally renting properties to others, resulted in the current legal proceedings against them, culminating in the District Court decision.”

And the Kohelet Policy Forum notes, “the leasehold and trespass legal issues at stake are similar to those found throughout the world, other than the unusually strong rent control and tenant protections given to the protected tenants (Palestinian Arabs in this dispute).” 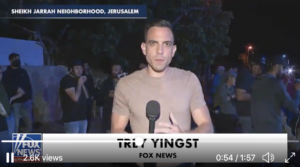 Yet, Trey Yingst’s May 8 report, which aired on FOX at about 1:57 PM Eastern time, claimed that the court decision to evict certain residents of that neighborhood was based on “an obscure Israeli law.” Yingst also quoted the UN Office for the Coordination of Humanitarian Affairs claiming that the residents are at risk “if the [Israeli] Supreme Court sets a new standard.” Of course, there is nothing “obscure” about the requirement that tenants pay rent, nor is it a “new standard.”

While Yingst interviewed two residents of the neighborhood on camera, he did not interview anyone who could reliably give an accurate legal perspective.

As the Kohelet Policy Forum explains, “the legal rights of the parties themselves were resolved decades ago, in favor of the property owners…. No one seriously disputes the validity of the transactions through which the current owners acquired rights from their predecessors in title.” Some of the residents are tenants who agreed, in 1982, to pay rent to the owners in order to stay, but who have failed to do so; others in fact are squatters who have no legal rights at all.

The [Israeli] 1970 Law and Administrative Arrangements Law (Consolidated Version) preserved the rights of private parties who received title from the Jordanian Custodian of Enemy Property, notwithstanding the illegality of Jordan’s occupation. (Persons who received rights from the Jordanian Custodian were all Arabs, since Jordanian law denied property rights to Jews.) … Ironically, if the Jordanian Custodian of Enemy Property had assigned title to the predecessors of the current Palestinian Arab holdover tenants over the lands it seized from Jewish owners, Israeli law would have respected the resulting title. The reason the holdover tenants in Sheikh Jarrah lack ownership today is not because the state of Israel has denied the Palestinian Arabs any rights they acquired, but, rather, because the government of Jordan declined to give the Palestinian Arabs title to the land Jordan had seized.

Moreover, in reporting on the continuing escalation, Yingst reported May 10 at 11:23 AM Eastern time on Hamas’s threats against “what Israel says is the capital of their country, Jerusalem.” Jerusalem is not the capital of Israel because Israel claims it to be so, but because that is where the Knesset is located. The U.S. formally recognized this in 2017.

In the same May 10 report, Yingst noted, “we were just on the Al Aqsa Mosque compound where Israeli police has stormed in earlier, throwing tear gas and stun grenades. The manager of the Al Aqsa Mosque spoke exclusively with FOX news, calling what Israel did this morning, ‘a barbaric act.’ Hamas echoed those calls.” Yet, Yingst failed to explain that, as Times of Israel reports, “the Israel Police said rioters had been hurling rocks and other objects from the holy site and launching fireworks at officers, leading them to enter the compound, a relatively uncommon move by Israeli security forces.”

In addition, Yingst told viewers of his May 8 reporting that “far-right Israeli politicians are using the unrest in Jerusalem for political purposes.” Perhaps so. Yet he failed to explore the possibility of any political motivation on the Palestinian Arab side, particularly given the recent cancellation of planned Palestinian elections by Mahmoud Abbas when polling revealed his weak support.