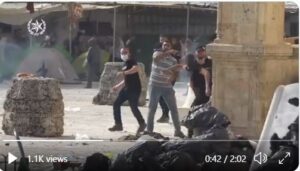 Muslims rioting on the Temple Mount, May 10, 2021 (screenshot from Israel Police Twitter feed)

Israeli police said that more than 200 Palestinians and 17 police officers were injured in clashes on Friday, after authorities cracked down while Palestinians worshippers gathered for prayers at Al-Aqsa mosque in East Jerusalem during Ramadan, the holiest month of the year for Muslims, Israeli newspaper Haaretz reported. Many of the worshippers stayed on after prayers to protest in support of Palestinians currently facing evictions at the hands of Israeli settlers.

(Strangely, the Haaretz hyperlink is to a May 9 article, meaning it was published one day after the Newseek piece was posted.) In any event, Haaretz‘s May 9 article reported: “On Friday night, at least 205 Palestinians and 17 police officers were wounded as clashes erupted at Jerusalem’s Al-Aqsa Mosque compound.” The hyperlink in that piece is to Haaretz‘s May 8 article, which plainly states that the violence started when Palestinians began throwing throwing rocks and other items at police. Nir Hasson and Jack Khoury reported:

In other words, according to Lemon’s own source, the police cracked down on Palestinians who were rioting, not praying. According to the police, the rioters also fired off fireworks at the police.

In recent days, the Associated Press commendably corrected a series of captions which falsely depicted rioting Palestinians as worshippers. CAMERA likewise calls on Newsweek to correct its false depiction of Palestinian rioters as worshippers.

Video taken from inside al-Aqsa Mosque and on its grounds Monday morning show a concerning scene where people inside are ready for more clashes ahead of Jerusalem Day. #Israel pic.twitter.com/QhuE7yPFyD

The fallacious notion that Israeli police cracked down on praying Muslims is reinforced by the article’s egregiously misleading headline referring to “violence against Palestinians,” as if the Israeli police initiated violence, and not the other way around.

In addition to failing to report any of the violence carried out by Palestinian rioters, Lemon quoted without comment or clarification tweets by Congresswomen Rashida Tlaib and Ihlan Omar promoting the libel that Israel is attacking peacefully praying Muslims.

As for “the tensions surrounding Israeli settlers working to evict Palestinians from their homes” in the Sheikh Jarrah/Shimon HaTzadik neighborhood of Jerusalem, Lemon quoted Senator Elizabeth Warren’s claim that “these evictions are illegal.” He failed to inform readers that in 1982 the Arab residents and their lawyers agreed in Magistrate Court that two Israeli non-profits, the Sephardic Community Council and the General Council of the Congregation of Israel, own the properties. Nor does he report that the residents have refused compromises which would have enabled them to continue to stay in their homes as protected tenants on the condition that they acknowledge the Jewish ownership of the properties.