If one were to believe National Public Radio, Israeli police attacked peaceful Muslims enjoying festive holiday meals during the holy month of Ramadan. 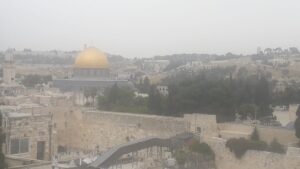 The Temple Mount on May 9, 2021, in the midst of a dust storm and unrest (Photo by Akiva Sternthal)

Police accuse the crowds of disorderly conduct and throwing stones at security forces.

Police said the protesters threw stones and bottles. Footage circulating online showed police and hundreds of protesters running through the streets as the sound of either fireworks or stun grenades echoed in the background. Police said three people were arrested.

lots of worshippers [were] breaking their fast in the big, open mosque plaza. And then the violence began. And it’s hard to say what exactly set it off, but in videos, you see Israeli police firing stun grenades, what people here called sound bombs, firing rubber-coated bullets. Palestinians are throwing stones and other objects. Police fired even into one of the mosque building onto the carpeted floor, as you see the smoke in videos and older men, very young kids inside — similar violence throughout the Old City. . .

Haaretz, which has been critical of the police response to Palestinian violence, was nevertheless clear about how Friday night’s Temple Mount violence began:

Israeli Police said in a statement overnight Friday that after the evening prayer disturbances have resumed as worshippers hurled stones at the forces. In response, police “forces have entered [the Temple Mount compound] to restore order while using riot-dispersal measures,” the police added.

Further developing the baseless theme that Israeli police, aided by Israeli rock-throwers, are simply interfering with peaceful Palestinian existence in the city, the NPR journalists address what they see as the causes of violence:

Simon asks: “Daniel, why is this happening now? Ramadan, the Israeli elections?”

I think all of the above, Scott. All surrounding Ramadan, there have been a lot of Palestinians in the streets. The city is emerging from the pandemic. And there have been almost nightly clashes between Israeli police and Palestinians. Police saying they were attempting crowd control, but Palestinians saying they see this just as an affront to their very existence in the city. I almost drove through a street clash, one of many, two nights ago. Young religious Jewish men throwing stones at Palestinian — I mean, it’s just happening all over the city.

And there have just been a series of events — a far-right Israeli march through the city shouting death to Arabs. There have been protests in a neighborhood where Jewish settler groups are claiming ownership rights, Palestinian families slated for possible eviction — on the backdrop of a leadership vacuum. Israeli Prime Minister Benjamin Netanyahu failed to form a government. His rivals are now trying. That could unseat him, and some pundits are even saying Netanyahu, who’s considered Mr. Security, benefits from a rise in tensions, may be somehow luring right-wing politicians to rally around him and to keep him in office.

Indeed, there has been a “series of events,” but Estrin’s recounting of those events is highly selective. For instance, Estrin fails to note the series of TikTok attacks in which Palestinians recorded their attacks on religious Jews and posted them to the social media platform.  As CAMERA’s Ricki Hollander previously reported:

One film showed a Palestinian youth walking over to two yeshiva students sitting on a train and slapping them unprovoked before sauntering off, while the filmer is heard egging the assailant on. Another showed a Jewish boy riding his bicycle alone until he is surrounded, punched and kicked by several Palestinian children, who then leave him to chase after other Jewish youths. Another clip was posted of Palestinian teenagers throwing hot coffee at an Orthodox Jewish man. And yet another post showed a Jewish man beaten by a Palestinian mob as he walks his dog.  In one of the most frightening attacks, a Jewish man was hospitalized after being brutally beaten and stomped on by a mob of Palestinians as he tried to flee his car by foot after it was stoned. His car was set on fire.

This social media incitement was preceded by a broadcast aired some 20 times on official Palestinian Authority television calling for violence, as Palestinian Media Watch documented. The video exhorted: “I fired my shots. I threw my bomb. I detonated, detonated, detonated by [explosive] belts. . . My brother, throw my blood on the enemy like bullets.”

The incitement on the part of Palestinian officialdom has continued throughout the month. Following a fatal shooting attack last week in which a Palestinian gunman shot dead an Israel teen, and injured two more, one of them gravely, a Fatah spokesman praised the attack as “heroic” and a “natural response.”

But NPR ignores the Palestinian attacks on Jewish civilians, and the glorification of such attacks on the part of both the public and the government. NPR’s one-sided account of the “series of events” is limited to Jewish men throwing stones at Palestinians, far-right Israeli marches, settlers evicting Palestinian families and Israeli politics.

NPR says nothing about Hamas threats regarding Jerusalem, including a rare statement by Mohammed Deif, the head of the terror organization’s armed wing who orchestrated numerous deadly suicide bombings. Times of Israel reported:

In a rare public statement from Mohammed Deif, the elusive head of Hamas’s armed wing, the Izz ad-Din al-Qassam Brigades, Hamas warned that Israel would pay a “heavy price” if the evictions went ahead.

“I salute our steadfast Palestinians at Sheikh Jarrah in occupied Jerusalem. The resistance leadership and al-Qassam are watching closely what is happening in the neighborhood,” Deif said.

“This is our final warning; If the aggression against our people in the Sheikh Jarrah neighborhood does not stop immediately, we will not stand idly by and the occupation will pay a heavy price,” he warned.

But Estrin has no interest in what Deif has to say. Instead, the journalist is riveted on the alleged speculations of unnamed pundits claiming that Netanyahu “benefits from a rise in tensions,” a means to “lur[e] right-wing politicians to rally around him and to keep in office.” The insidious implication is that Netanyahu is, in fact, engineering the violence for political gains.

The word “Hamas” does not make a single appearance in Estrin’s broadcast despite Hamas’ direct threats for more violence. Estrin concludes: “There are fears this could escalate. Tonight there will be large numbers of Palestinians expect for the holiest night in the Muslim calendar. Two days later, Israeli ultranationalists marching through the city of an annual day celebrating Israeli capture of Palestinian areas.”

In NPR’s skewed coverage, only Israelis are “ultranationalists.” As for the Palestinian ultranationalists gathered yesterday evening for the holiest night in the Muslim calendar and clamoring for rockets on Tel Aviv (“Strike Tel Aviv. . . . In spirit and in blood, we will redeem al-Aqsa“), they were just breaking the Ramadan fast.