Bella Hadid is an American model of Palestinian and Dutch descent. She is known for her beauty, her many magazine covers, and her pro-Palestinian activism.

Hadid is, of course, entitled to hold and voice her own opinions. But she seems to have crossed a line in May of 2021, when she posted a video of herself on Instagram chanting, along with others, “from the river to the sea, Palestine will be free.”

The Prophet, Allah’s prayer and peace be upon him, says: “The hour of judgment shall not come until the Muslims fight the Jews and kill them, so that the Jews hide behind trees and stones, and each tree and stone will say: ‘Oh Muslim, oh servant of Allah, there is a Jew behind me, come and kill him,’ except for the Gharqad tree, for it is the tree of the Jews.”

As CAMERA has written before, even under the most generous interpretation of the phrase, one that allows Jews to remain, a Palestinian state “from the River to the Sea” would result in a loss of Jewish self-determination – a right that Arabs presently have in 21 countries and that Muslims have in 56 countries. It would also result in the loss of the only Jewish homeland; the loss of a refuge for persecuted Jews in the diaspora. It would be the loss of the only place on earth where Jews can go and find their holidays marked by school and government closures, their calendar in use, their language spoken as the primary language.

And Hadid is influential. Journalist Lahav Harkov has pointed out that Bella and her sister, model Gigi Hadid, have more social media followers than the entire population of Israel. So when she calls for the destruction of Israel, people take note. That’s why the Israeli Ministry of Foreign Affairs stepped in to respond to her at the time.

Of course, you wouldn’t know any of this controversy from Glamour’s recent article about Hadid and her troubles. (“Bella Hadid Says Her Vocal Support for Palestine Has Lost Her Jobs,” Kathleen Walsh, August 16, 2022.) According to Glamour, it was merely Hadid’s “outspoken advocacy for Palestine,” that has cost the model jobs and friends. The magazine covers up the model’s call for the destruction of the world’s only Jewish state, writing,

After attending a pro-Palestine march in New York City in 2021 and posting about the march on Instagram, Hadid was lambasted by the official Israel Twitter account, which called her an “advocate for throwing Jews into the sea.” She, along with sister Gigi Hadid and singer Dua Lipa, were also the targets of a full-page ad in The New York Times (via The Cut) that called their pro-Palestine advocacy akin to “anti-Semitism.” 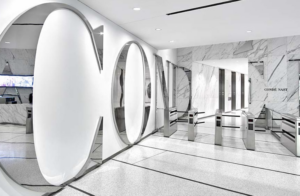 Glamour does not appear to have challenged or investigated any of Hadid’s assertions. It even embedded an Instagram post in which Hadid repeats a quote she attributes to Israel’s first Prime Minister, David Ben Gurion, a quote that Glamour could have learned in less than five minutes that even Electronic Intifada admits is not accurate.

More to the point, Glamour does not seem to have taken the trouble to find out from any of the businesses or friends who dissociated themselves from Hadid what, specifically, they found so objectionable. The fashion magazine that once gave an award to Linda Sarsour not only failed to determine the particulars of Hadid’s advocacy, it also seems to have failed to ask basic questions such as, what are the borders of this “Palestine” for which Hadid advocates? When was its sovereignty established? What is its history? And perhaps most importantly, what, specifically, would it mean to Hadid to “free” it, from “the river to the sea”?

With such shoddy work, it’s no surprise that Glamour’s fellow Conde Nast publication Teen Vogue, which has a record of anti-Israel hostility, picked up the piece and published it as well.

Of course, neither publication covered, for example, Regina Spektor’s recent comments about the double standard that is applied when the media covers Israel – in effect proving the singer’s point. While the media is rife with such double standards (as CAMERA has consistently pointed out), in the case of Conde Nast’s fashion publications, there is not even a pretense of even-handedness or of any attempt at actual journalism.