“‘Lo ta’amod al dam re’eikha.’ Do not be indifferent to the bloodshed of your fellow man,” Apple CEO Tim Cook quoted the biblical verse as he accepted the Anti-Defamation League’s Courage Against Hate Award in 2018, emphasizing his company’s commitment to fight hate. Of the biblical injunction, he said, “It moves us not to be bystanders as hate tries to make its headquarters in the digital world.”

Covering Cook’s acceptance of the honor at the ADL’s 2018 Never is Now Summit, Times of Israel recounted: “Cook cited policies of its online music store iTunes to not allow white supremacist-themed content or violent conspiracy theories as examples of its commitment to fighting hate.”

For Apple, though, “Never” lasted less than six months.

In May 2019 — less than half a year after Cook proclaimed, “At Apple, we’re not afraid to say our values drive our curation decisions, and why should we be?” — Apple News awarded Abdel Bari Atwan with a regular platform. The British-Palestinian journalist is notorious for his long track record of antisemitism and statements supporting the murder and mass-expulsion of Jewish civilians in Israel.

Good news, you can now follow the Raialyoum channel on Apple news to read my articles in English, below the link for the latest one.https://t.co/K062F9s27S

In one of countless expressions of support for terror prior to his Apple association, Atwan mourned child murderer Samir Kuntar  as “a great man” and a “martyr.”

From 2019 until now, Atwan has been a consistent purveyor of anti-Jewish bigotry and terror incitement.

In October 2019, he warned against greeting Jews on Rosh Hashanah, lest one come to greet them on Israeli Independence Day as well.

This past April, Atwan alleged “massive Jewish institutions” and “70 Jewish MPs” have “formed an alliance against me.”

Also that month, again speaking on Al Mayadeen TV, he advised “the wise Jew” to buy an island in Greece to escape from the coming onslaught of rockets.

For armed cells to get to Jerusalem and fire at settlers, injuring five including three severely, this marks a turn back to the basics. [It is] the most effective and hurts the occupation the most, more than the rockets, the human losses of which are limited. There are mighty minds planning and perpetrating and the next days bear surprises as the Gaza war continues [Translation from Arabic by CAMERA Arabic.]

Like his preceding incitement, Atwan’s fresh praise for a terror attack in which U.S. citizens were injured did hamper his welcome at Apple News. Cook’s company has provided a home for English-language translations of Atwan’s Arabic editorials which originally appeared in “Rai al-Youm,” the online newspaper where he serves as editor-in-chief. 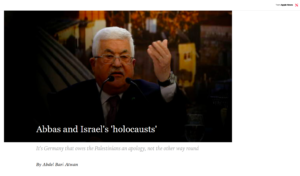 Days after Atwan cheered the “effective” shooting, Apple News deemed it appropriate to give the terror supporter the opportunity to weigh in on Mahmoud Abbas’s Berlin fiasco in which the Palestinian leader accused Israel of “fifty Holocausts.” Under the heading “Abbas and Israel’s ‘Holocausts,'” Atwan exonerates Palestinian terrorists for the murder of Israeli athletes in the Munich Olympics, pinning responsibility on the Mossad and German police, and also praises Abbas’ “holocausts” remark as “poignant and powerful.” He wrote:

It’s Germany that owes the Palestinians an apology, not the other way round.

… I support his [Abbas’] refusal to apologize for the killing of 11 Israeli participants at the 1974 Munich Olympics, and his use of the term “holocausts” to describe the many massacres to which Palestinians have been subjected by Israeli forces over the years.

Abbas … was not asked about his view of the Nazi Holocaust, but of the death of the Israeli athletes on the 50th anniversary of the Munich incident. His reply, reminding his questioner of the “Israeli holocausts” perpetrated daily against the Palestinian people, was poignant and powerful. He should not retract it or try to clarify or fudge it to appease criminals whose record is replete with racism, atrocities, and war crimes.

The massacre of the Israeli athletes in Munich was not committed by Abbas or by the Black September squad that abducted them. They were killed by Israeli Mossad operatives and German police who stormed the place where they were being held. The five kidnappers, who had wanted to exchange them for Palestinian prisoners held in the Israeli occupation’s jails, were all liquidated. But Israel, supported by Germany’s guilt complex, considers itself above any law or accountability and feels free to twist the facts.

Abbas has saved countless Jewish lives by devoting 60,000 Palestinian security personnel to protecting Israeli settlers for the past 30 years, the biggest scandal in the history of national liberation movements. His only reward has been to be insulted and abused by Yair Lapid, Lieberman and other Israeli leaders. …

Abbas was excoriated by Scholz and the German opposition for describing Israel as a racist Apartheid state. If I were him I would have replied that the Germans should apologize to the Palestinian people, not the other way round, for their blind unconditional defense of blatant Israeli racism and their hypocrisy, double standards, and falsehoods when it comes to the Palestinian cause.

The Nazi Holocaust was the ugliest crime in modern history and must be condemned in the strongest terms. But usage of the term is not a Jewish copyright, and we should not be prevented from using it to describe the holocausts to which the Palestinians and other peoples have been and continue to be subjected.

I wish Abbas had taken such a bold stance 30 years ago instead of engaging in futile negotiations and imagining that peace could be achieved with a murderous, racist colonizer … [Emphases added.]

While this hatred is par for the course in the context of Atwan’s vast Arabic output, it sets a new low for his English-language content.  Not only does he deem “fifty Holocausts” an adequate term to describe Israel’s treatment of Palestinians, he also instructs that “usage of the term is not a Jewish copyright.” According to the International Holocaust Remembrance Alliance working definition of antisemitism, adopted by dozens of Western countries, “[d]rawing comparisons of contemporary Israeli policy to that of the Nazis” constitutes antisemitism.

Notably, Atwan himself has drawn this comparison. In September 2012, he labeled the Sabra and Shatila massacre “a Palestinian holocaust,” part of a long series of “holocausts [sic]” inflicted upon Palestinians and Arabs, “not by gas ovens but by Israeli F-16 missiles, which are manufactured in the U.S.”

Furthermore, Atwan pans Abbas for allegedly devoting his Palestinian security services to “save countless Jewish lives,” thereby contributing to the “the biggest scandal in the history of national liberation movements.”

Also noteworthy are the numerous historical distortions and lies populating Atwan’s column. Contrary to Atwan’s claim, the Mossad did not take part in the failed rescue operation, as Germany prevented the Mossad’s participation. In addition, the Palestinian terrorists murdered two Olympians before the German operation even began. Furthermore, the terrorists were not “all liquidated”; three out of eight were captured alive and freed within weeks in exchange for a hijacked Lufthansa airplane. Finally, the 20 (not 90) Egyptian soldiers in Latrun did not surrender but were burned to death after their firefight with Israeli soldiers accidentally set the field on fire.

Atwan’s fabrications match Apple’s promise for world-class journalism like his statements calling for Jewish blood match Cook’s stated commitment to not be indifferent to the bloodshed of fellow man.

It is shameful enough that Apple News syndicates the editorials of a antisemite like Abdel Bari Atwan even when he slyly tones down some of his rhetoric when switching into English. But to uncritically amplify the same hateful propaganda against Jews and Israelis in English as well should be tolerated even less so.

In 2018, Times of Israel reported that Apple CEO “Cook in recent months has sought to distance Apple from the social media giants [like Twitter and Facebook which faced criticism for not sufficiently standing up to hate], saying Apple deals in hardware and does not depend on ad revenue from users.”