Haaretz‘s editorial board is not surprised that Prime Minister Netanyahu “made do” with congratulating Angela Merkel on her reelection and did not condemn the far-right Alternative for Germany (AfD) party in the wake of its strong showing in the recent German elections (“Israel Can’t Point the Finger at Germany,” Sept. 26). The paper’s editorial explains that Netanyahu “did not have the freedom” to condemn AfD, because “Netanyahu’s Israel is part of the global trend of the ascendancy of the far right. And not merely part of it, but rather an advance guard of the trend” of extremism, fascism and xenophobia. The article provides examples that do little to strengthen its central argument.

The editorial starts with an example of a recent court decision:

Can you sound the alarm against racism when in your own country, restrictions against Arabs using the community center in Kokhav Yair received official sanction? That is what happened, in effect, when the Lod District Court permitted the center to reserve 90 percent of its memberships solely for residents of the community.

The criticism towards residents of Kokhav Yair, who reportedly do not wish to swim in the pool together with the residents of the nearby Arab villages, is certainly legitimate. But is Kokhav Yair “part of the global trend of the ascendancy of the far right”?

An examination of Kokhav Yair’s voting data in the last elections tells another story. In the 2015 elections, the left-wing parties (The Zionist Camp/Labor, Meretz) won a large majority of 46 percent. On the other hand, right-wing parties (Likud, The Jewish Home, Israel Beiteinu) garnered 29 percent of the votes, and the center-leaning parties (Yesh Atid, Kulanu) received 22 percent.

If Haaretz’s editorial board was more honest and self-critical, it would have presented the story of Kokhav Yair as it is: not as evidence of the ascendancy of the far right, but of the racism among the Israeli left.

Can one warn against ultranationalism when your government tells the High Court of Justice that it plans to demolish a Bedouin village (Khan al-Ahmar) on grounds of “illegal construction,” when it plans to expand an illegal Jewish settlement in the same area?

As CAMERA reported here, Bedouin settlement in Khan al-Ahmar has sprung up in recent years, while its proponents falsely claim residency dating back over 50 years. Notably, as the Los Angeles Times reported in January 1994: “No one, not even [Jahalin member Mohamed Ahmad] Hairsh, claims that his tribe has a legal right to be there.”

The editorial concludes with a question, the answer to which is simply ironic:

Can one be shocked by the AfD… when a picture of the prime minister’s son decorates the home page of a neo-Nazi website, thanks to an anti-Semitic collage he posted to the exultant cheers of a former Ku Klux Klan leader?

The reference here is to Yair Netanyahu’s recent Facebook post featuring a cartoon with anti-Semitic motifs. Interestingly, racist leader David Duke did not share the Yair’s post itself – but the Haaretz story about it.

While Yair has no reason to be proud, Haaretz would do well to remember that people in glass houses should not throw stones. A search of Duke’s website reveals over 600 mentions of Haaretz. Links and citations include, among others, use of Haaretz to “prove” that Jews control the global pornography industry; a column by Gideon Levy about the situation in Gaza; a gleeful posting of an Haaretz Op-Ed which equates Israel and Nazi Germany; a story by Amira Hass that compared the Gaza Strip to the Bergen-Belsen concentration camp; an article that was copied in its entirety, as is, about the racist group Lehava; and many more. 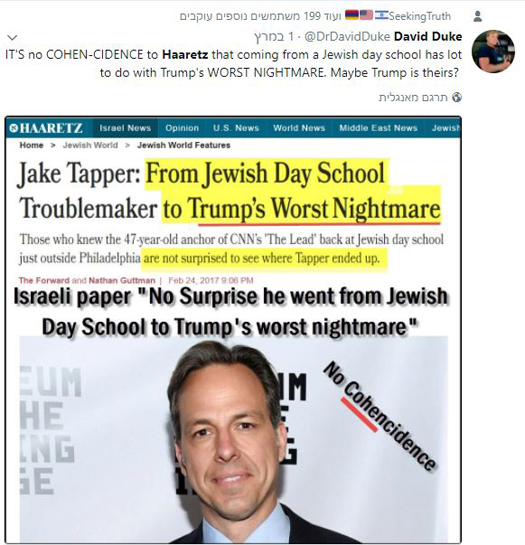 Until it went offline a couple of days ago, the neo-Nazi site The Daily Stormer, which had indeed declared itself as “Yair Netanyahu’s #1 fan site,” also contained over 200 mentions of Haaretz, including “exultant cheers” (as Haaretz put it) from David Duke. It should be noted that while Yair Netanyahu has deleted his incendiary post, Haaretz did not see fit to remove any of the content that its neo-Nazi fans celebrated. Before condemning Yair Netanyahu, Haaretz‘s editorial board should engage in some serious introspection.