More than 20,000 Israelis turned out yesterday to accompany the remaining members of the Fogel family as they buried parents Udi (36) and Ruth (35), along with children Yoav (11), Elad (4), and Hadas (three months). The killings and the funerals were traumatic events touching much of Israel, but for Ha’aretz the burials did not warrant page one news.

Instead, the leading story of today’s English print edition is “Israel okays 400 West Bank housing units in response to Itamar murders.” It occupies five columns and is accompanied by a four column photograph and two additional graphics (a map, and a second photo). The double-decker headline is followed by the subheadline, “Building slated for main settlement blocs and isolated outpost near Bethlehem.” Gideon Levy’s account of his trip to devastated Japan takes up the rest of the above-the-fold space.

What else does Ha’aretz find page one space for? Migrating cranes and new technologies in archeology. 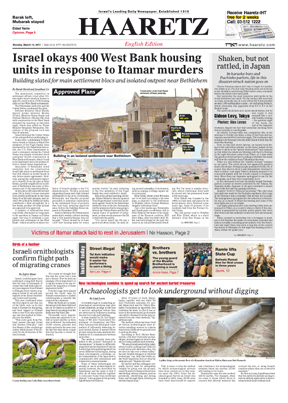 But the burial of two parents, massacred in their beds along with their three sleeping children? Relegated to a four-column article on page two and a tag in the middle of page one reading: “Victims of Itamar attack laid to rest in Jerusalem/Nir Hasson, Page 2.” (The page two columns are narrower than those on page one, and thus the 13-paragraph funeral story received fewer column inches than the 16-paragraph settlement building story.)

A comprehensive study as to what warrants page one news at Ha’aretz (settlement building, migrating birds, technological advances in archeology, and the removal of scaffolding in Jerusalem’s Old City) versus what doesn’t (the burial of five members of a single family, including a months-old infant, all victims of Palestinian terrorism) would provide valuable insight into the mentality of the powers that be at Planet Ha’aretz. Stay tuned.