For two consecutive days last week, the English edition of Ha’aretz falsely reported that Jewish prayer is permitted on the Temple Mount. This is an egregious error in light of the fact that only Muslims are permitted to pray at the site. That Jews are completely prohibited from praying at the Temple Mount, Judaism’s most sacred site, is an underreported and little-known fact about Jerusalem, a city that draws intense scrutiny and coverage.

Indeed, while the New York Times, for instance, continues to demonstrate a keen interest in worship rights of non-Orthodox Jewish women at the Western Wall, the paper of record has not spent so much ink on the freedom of worship, or lack thereof, at the Temple Mount. In that paradoxical situation, the Jewish state, which ensures freedom of worship for all, denies that freedom in just one location. At the Temple Mount, Judaism’s holiest site, the Jewish state prohibits Jewish prayer and all other non-Muslim prayer. Non-Muslims may enter the Temple Mount only on certain days and hours, and it is forbidden to bring non-Muslim religious objects and symbols like the Tanach (the Jewish Bible), the New Testament, the Star of David, and the cross, to the Temple Mount. Anyone caught even mumbling a non-Muslim prayer is forcibly removed from the site. In contrast, Muslims may enter the site 24 hours per day, seven days a week, and they may engage in any religious activity, and even play soccer or have picnics on the Temple Mount, the third holiest site in Islam. (There have been days of limited restrictions during heightened security tensions, when Muslim men under a certain age have not been granted access to the Temple Mount.)

Even in the Cave of the Patriarchs in Hebron, another site of intensive conflict and coverage in the past, there is a very clear division which provides an area for Jews to pray, and a separate area for Muslims to pray. In addition, there are 10 days in the year in which the compound is open only to Jews, and another 10 days in which the compound is open only to Muslims. At the Temple Mount, there is no such equitable division. Muslims are the only ones who enjoy the freedom to worship all year long, and members of other religions do not have even one day in the year to realize their freedom to worship at the Temple Mount.

Far from allowing Jews to enter the Temple Mount to pray, the police enforce the status quo prohibiting Jewish prayer, forcibly removing and even arresting those who attempt to violate it. (The wording of the online version of the same article was changed, and the erroneous phrase “to pray,” following CAMERA’s correspondence with editors last Thursday.)

The error is another “Ha’aretz, Lost in Translation,” in which translators for Ha’aretz‘s English edition mistranslate the original Hebrew article, introducing misinformation that did not appear in the reporter’s original Hebrew report. Thus, Barak Ravid wrote in Hebrew (CAMERA’s translation): “Yesterday morning the police allowed some 200 Jewish worshippers to enter the Temple Mount in honor of Jerusalem Day.”

Despite the fact that CAMERA notified Ha’aretz editors Thursday about the error in the English edition, the same error appeared the very next day (May 9) with the front-page story (“Women of the Wall, Haredi girls to face off at Kotel”) by Yair Ettinger. The article erred: 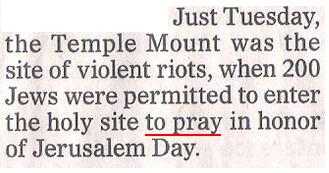 Unfortunately, in his article Friday, Barak Ravid alluded to the status quo concerning Jewish worship on the Temple Mount, but he missed the opportunity to define exactly what that status quo is. Thus, he writes (and here the Hebrew and English are consistent):

Meanwhile, the Knesset Interior Committee held a meeting Wednesday on the subject of Jewish worship on the Temple Mount. A representative of the Foreign Ministry at the meeting, deputy director of the Jordanian Department, Frieda Yovel, warned that any change in the status quo of the Temple Mount would lead to harsh international criticism of Israel, “as happened after Ariel Sharon’s visit to the Temple Mount in 2000 or the opening of the Western Wall Tunnel.”

Given that the article had already reported that police “allowed some 200 Jews to enter the Temple Mount to pray,” uninformed English readers would reasonably deduce, wrongly, that the status quo allows for Jewish prayer at the holy site.