CAMERA’s Israel office yesterday prompted correction of a Haaretz Op-Ed by Shannon Maree Torrens which falsely claimed that Israel refused a request from the World Health Organization to provide vaccines for Palestinian health workers. The Jan. 11 Op-Ed, “COVID vaccines: The latest example of Israel’s most lethal disregard for Palestinian lives,” appeared in the English’s print edition as well as online. Torrens, identified as an international and human rights lawyer from Australia who has worked at the United Nations international criminal tribunals, leveled the fallacious charge:

The World Health Organization asked Israel to make the vaccine available for Palestinian health workers but Israel refused, arguing that they did not have enough vaccines, all while surpassing the rest of the world in the rate at which it is vaccinating its people. 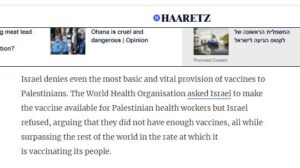 In fact, both Israel’s Ministry of Health and the World Health Organization official responsible for the Palestinian territories issued statements which refute Torrens’ baseless charge that “Israel refused” WHO’s request to supply vaccines for Palestinian health workers.
In a Jan. 8 BBC interview, Gerald Rockenschaub, head of WHO’s office for the Palestinian territories, explained that there were informal talks about Israel providing vaccines for Palestinian health workers, and that no decision has yet been made since Israel still does not have vaccines for all its citizens. He told the BBC:

“I think there are also some shortages that the Israelis are facing at the moment. We had some informal discussion asking whether at least some quantities could be relocated to vaccinate the health workers in the Palestinian territories. We’re having discussions at the moment but no final results yet.”

A WHO official said on Sunday the organisation had held “informal discussions” with Israel over allocating some supplies to the Palestinians to inoculate health workers. The official, Gerald Rockenschaub, head of the WHO office in the Palestinian territories, said Israel indicated it would explore the option. (Emphasis added.)

As for Israel’s Ministry of Health, in response to a verification request from CAMERA UK regarding The Independent‘s identical claim earlier in the week that Israel refused the WHO request, an official for the Ministry responded: “The Israeli Ministry of Health, which has a very healthy working relationship with the WHO and is running the current vaccine drive, has never received a request like this from the WHO.”
Prior to the publication of Haaretz‘s Op-Ed, the Independent had already improved its coverage, adding that WHO clarified that “informal discussions” took place in which the Israeli ministry “indicated they would explore this option,” and also that the health ministry denied that a request had been made.
In response to communication from CAMERA, Haaretz editors commendably amended the digital article. The amended text now states:

The World Health Organization asked Israel informally to make the vaccine available for Palestinian health workers; Israel responded that due to shortages, they were not currently in a position to supply vaccines but would explore the option, despite surpassing the rest of the world in the rate at which it is vaccinating its people.

In addition, a note appended to the bottom of the article alerts readers to the change, stating:

This article has been updated in the light of further reporting on the response of the Israeli Ministry of Health to the WHO’s informal request to supply Palestinians with COVID vaccines.

Unfortunately, a correction does not appear in today’s print edition.
Separately, regarding the well-documented vaccination of Palestinians in east Jerusalem, Torrens equivocated: “Israel has reportedly given Palestinians in east Jerusalem access to the vaccine. . . .” The qualifying term “reportedly” falsely suggests that the considerable effort to vaccinate east Jerusalem Palestinians cannot be confirmed.
Haaretz would presumably not run an Op-Ed stating that President Trump “reportedly lost the U.S. elections” as this language would cast doubt on this basic factual reality, fueling misinformation.
Haaretz‘s own Nir Hasson detailed that Israeli HMOs Clalit, Leumit and Meuhedet are all offering the vaccine to east Jerusalem’s Palestinians. (See hyperlink.)

Similarly, in the aforementioned BBC interview, WHO’s Rockenschaub made clear: “The only Palestinians that were vaccinated so far are those living with Jerusalem IDs in East Jerusalem and who have access to Israeli health system.””
To their credit, editors agreed, and removed the inappropriate qualification, “reportedly.”
Beyond these two narrow points, Torrens’ underlying, false premise is that Israel’s failure to uphold its supposed obligation “under international law and international human rights law” to provide West Bank and Gaza Palestinians with the covid vaccine exhibits “a complete disregard for the humanity and lives of Palestinians.” As CAMERA has previously documented, it is the bilateral Oslo Accords which govern Israeli-Palestinian relations, and Article 17 of the Interim Accords obligates the Palestinian authorities to vaccinate their citizens in the West Bank and Gaza Strip.