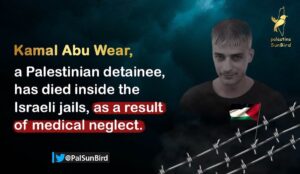 Image from the Facebook page of Palestine Sunbird, an anti-Israel propaganda blog

The Associated Press has failed to correct a straightforward factual error in the Jan. 4 article, “Israel says Palestinian arrested in killing of settler,” which misreported that an ill Palestinian security prisoner died in Israeli prison in November. In fact, the prisoner had died while receiving medical care at Asaf Harofeh Medical Center in central Israel. The uncorrected false report plays into baseless Palestinian propaganda that Israel does not provide Palestinian prisoners with adequate medical care.
In reporting about the arrest of Palestinian Muhammad Cabha for the killing of Israeli Esther Horgan, who was murdered last month as she was out for a run near her home, AP erred:

The Shin Bet said Cabha decided to carry out the attack after a security prisoner he knew died of illness in prison about six weeks earlier.

While the Shin Bet did indeed say that cancer-stricken prisoner Kamal Abu Awar “died in prison due to an illness,” this is not correct.
In communication with CAMERA, Yitzhak Gurlov, the Prison Services spokesman, confirmed that Abu Waer passed away in Shamir Medical Center (aka Assaf Harofeh Medical Center.) The Israel Prison Service press release sent following Abu Awar’s death in November stated:

Announcement on the death of a security prisoner
A terminally ill security prisoner belonging to the Fatah organization, died today (Tuesday, Nov. 10, 2020), in Assaf Harofeh Medical Center.
The prisoner was hospitalized in a medical center belonging to the prison service for several months, and in July he was confirmed to have coronavirus, and recovered.
He continued to be treated for his [terminal] illness in the prison clinic, and last week he was transferred to Asaf Harofeh Medical Center in light of a worsening of his health condition and he was pronounced dead there.
The prisoner, born in 1974, a resident of Judea and Samaria, was sentenced to four life sentences and another 50 years for intentionally causing death, membership in an illegal organization and attempted murder, and entered the prison system in 2003.

CAMERA provided the AP with the information from the Prison Service, and yet AP declined to correct the plainly false claim that Abu Waer died in jail.
Clearly, a different level of medical care is available in hospitals versus prisons. Palestinian groups employ false claims of sick prisoners dying in jails to advance the unfounded smear that the Israeli prison system denies Palestinian prisoners adequate medical care. Indeed, in a press release falsely entitled, “2nd Death in 2020: Palestinian with Throat Cancer Dies in Israeli Prison, Israeli Authorities Purposefully Lead Prisoners to their Deaths and Disregard Repeated Calls for their Release,” the Palestinian Center for Human Rights alleges:

Also, Abu-Wa’ar’s death highlights the persistent Israeli disregard for repeated calls for the release of dozens of Palestinian prisoners with chronic and serious diseases who have spent many years behind bars, all the while neglecting its duty to provide them with adequate health care services. Many Palestinian prisoners lost their lives due to this deliberate indifference, the latest victim was Sa’di Khalil al-Gharabli (74) from Gaza City, who died on 08 July 2020, after spending 26 years in imprisonment, and had suffered chronic diseases, including prostate cancer; yet, he was left to die in prison.

Regarding Abu Waer’s supposed death in an Israeli prison, PCHR contradicts itself, writing in the first sentence that Abu Waer was pronounced dead at Shamir Medical Center. As for Sa’di Khalil al-Gharabli, about whom PCHR said “he was left to die in prison,” a PCHR release about his death similarly carried a headline falsely charging that he died in prison: “PCHR Holds Israel Full Responsible for Death of Palestinian Al-Gharabli in Israeli Prisons.” Yet as the PCHR press release itself goes on to state, al-Gharabli “was pronounced dead in Kaplan Medical Center where he was recently transferred from al-Ramlah prison after his health condition deteriorated.”

In the past, Agence France Presse, another leading wire service, commendably corrected a series of photo captions which, relying on false information supplied by Palestinian sources, falsely stated that a different sick prisoner died in prison, when in fact he died in the hospital, while still in Israeli custody. Concerning Abu Waer, AFP this time got it right from the start, accurately citing “the death of an ailing Palestinian prisoner he knew in Israeli custody” (“Israeli security says Palestinian confessed to killing settler,” Jan. 4). (Emphases added.)
By falsely depicting the death of a Palestinian prisoner while in Israeli custody in a hospital as a death in prison, where advanced medical care is not available, AP plays into Palestinian propaganda.
Times of Israel, Israel Hayom Correct

Kabha said that approximately six weeks before the murder, the death of another security prisoner, Kamal Abu Waer, in prison due to illness had prompted him to carry out a terrorist attack.

However, Prison Services Spokesman Yitzhak Gurlov confirmed that Abu Awar died in Shamir Medical Center in centreal [sic] Israel and not in prison, as claimed by Kabha.