But that’s because they will likely not hear the less savory side of the story: The part about the Palestinians who had to be evicted from their homes so this place could be turned into a tourist attraction. (Emphasis added.) 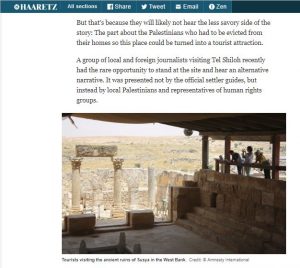 A 2015 article by Haaretz‘s Nir Hasson about the very same archaeological site does not substantiate the claim that Palestinians were evicted from their homes in order to make way for the attraction. Rather, according to Hasson, the dispute resolved around lands (presumably agricultural). He wrote:

Moreover, Hasson wrote that the Supreme Planning Council of Judea and Samaria rejected the argument that the site encroached on their lands.

In addition, nothing in the new Amnesty International report about which Maltz wrote substantiates the claim that Palestinians were evicted from their homes in order to establish the tourist site. About the Shiloh site, Amnesty maintains:

Booking.com listed one property, and TripAdvisor listed an archaeological site and visitor attraction, managed by settlers from Shiloh, as well as tour guides who take people to the site. The establishment and expansion to these settlements have had a harmful impact on the human rights of residents of neighbouring Palestinian villages Qaryut and Jalud. Residents have lost access to farmland and the main road leading to their homes. They often come under attack from settlers. The human rights that have been violated include the rights to physical integrity, to an adequate standard of living and food, to health, to education and to freedom of movement.

A detailed report by Emek Shaveh also refers to Palestinians who cultivated the lands at the site into the 1970s, but not Palestinians evicted from their homes. 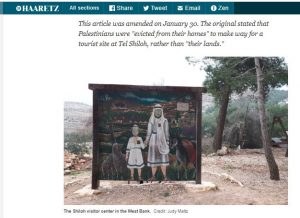 In addition, a correction (at left) appeared in the Feb. 1 print edition. While the corrections state as fact that the land in question was Palestinian owned, according to Hasson’s 2015 report, that claim is disputed. The Supreme Planning Council of Judea and Samaria rejected the allegation.

In a separate factual problem in the piece, Maltz refers to West Bank properties as beyond Israel’s “internationally recognized borders.” Maltz has employed this inaccurate terminology on multiple past occasions. The Green Line, or what was the pre-1967 boundary between Israel and Jordan, is an armistice line, not an internationally recognized border. While multiple media outlets, including i24 News, The Washington Post, and USA Today, have previously corrected this error, Haaretz has repeatedly declined to correct this point.