In its leading story today on the murderous shooting spree which left 11 dead at the Tree of Life Synagogue in Pittsburgh yesterday, Haaretz cites the outraged responses from leading Israeli figures like President Reuven Rivlin, Jewish Agency Chairman Isaac Herzog, Education and Diaspora Affairs Minister Naftali Bennett, Executive Director of the Conservative Movement Yizhar Hess and Consul General of Israel in New York Dani Dayan. Then, as if it’s the most natural thing to do, the page-one, above the fold article (“11 killed in Pittsburgh synagogue shooting; gunman held at scene,” and online here) closes this round-up of reactions from high profile Israelis with a quote from “American Palestinian Women’s March leader Linda Sarsour.”

In addition to being an anti-Israel activist who advocates for the end of the Jewish state, Sarsour is also a longtime fan of noted anti-Semite Louis Farakkhan, biographical information which Haaretz withheld from readers and which makes her inclusion among Israeli leaders expressing their shock and outrage particularly jarring.

In Israel, President Reuven Rivlin also extended his condolences to members of the Jewish community, saying: “Our prayers and deepest concerns are focused on what is happening in Pittsburgh, Pennsilvaniya. Our hearts and thoughts are with the families of those who were slain and we are praying for the speedy recovery of the injured. I am certain that security forces and U.S. law enforcement will investigate the appalling incident thoroughly and bring the murderer to justice.”

Jewish Agency Chairman Isaac Herzog echoed such sentiments in his own statement: “Horrible shooting during Shabbat Service at Congregation Etz Chaim in Pittsburgh. We at the Jewish Agency are in pain and mourning with the Pittsburgh Jewish community, and will assist in any possible way. Our thoughts and prayers are with the victims and their families.”

Education and Diaspora Affairs Minister Naftali Bennett departed for Pittsburgh hours after the attack took place. He is slated to visit the scene of the attack, meet the local community and participate in the funerals of those killed.

“The State of Israel and the Israeli Government are shocked and pained to receive the reports of the terrible attack on the Jewish community in Pittsburgh,” Bennett said in a statement before departing.

“We are following the news with concern, and I have instructed the Ministry of Diaspora Affairs to prepare to assist the community in every possible way. Our hearts go out to the families of those killed and injured. May the memory of the murdered be blessed,” his statement read

Yizhar Hess, executive director of the Conservative movement in Israel, spoke about the loss the community suffered, “It is a tough evening, and to all those who accuse us of not being Jews or not being Jewish enough, here is yet another proof, written in blood,” Hess said.

The Consulate General of Israel in New York, which is also responsible for Pennsylvania, wrote that it “stands in solidarity and heavy mourning with the Jewish community of Pittsburgh for the terrible murder of Jewish worshipers this morning.”

Consul General of Israel in New York, Dani Dayan, also released a statement. “Today, murderous anti-Semitism has reached our borders, and the State of Israel stands with the Jewish community of Pittsburgh, shoulder to shoulder.”

American-Palestinian Women’s March leader Linda Sarsour wrote on Facebook: “This is absolutely devastating and so scary. Sending love to our Jewish family. We promise to stand in solidarity with you. We are in this together. We have to be.” (Emphasis added.)

The digital edition also included a screenshot of Sarsour’s tweet. 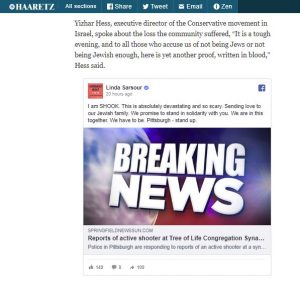 Haaretz‘s inclusion of Sarsour’s self-serving condemnation of the deadly attack alongside the statements of Israeli leaders is indefensible in light of her admiration for Nation of Islam leader Louis Farrakhan. “In recent times, there has been one constant in anti-Semitism in America: Louis Farrakhan,” Jonathan Greenblatt, National Director of the Anti-Definition League recently wrote:

The longtime leader of the Nation of Islam, Farrakhan’s name has become virtually synonymous with anti-Semitism. He’s the pied-piper of hate. His obsessive harping on about the “evil, satanic” Jews and their supposed efforts to keep down African-American people, ironically, puts him in a similar category to white supremacists and others who traffic in some of the worst anti-Semitic stereotypes.

Writing in The Forward last March, Dr. Petra Marquardt-Bigman documented Sarsour’s admiration for Farrakhan, pointing out that almost exactly one year ago the vocal anti-Israel activist proudly reposted for her 200,000 Facebook followers a two-year-old recording of her speech at a rally organized by the Nation of Islam preacher (“Linda Sarsour Has Been A Farrakhan Fan For Years“).

Indeed, Sarsour echoed Farrakhan’s ugly anti-Semitic sentiments when she stated: “[the] same people who justify the massacres of Palestinian people and call it collateral damage are the same people who justify the murder of young black men and women.” Marquardt-Bigman noted that Sarsour raced to the defense of her friend and Women’s March co-chair Tamika Mallory when she came under fire for embracing Farrakhan.

Haaretz‘s inexplicable inclusion of Sarsour’s condemnation of the synagogue massacre alongside those of Israeli leaders is puzzling. Moreover, the paper’s failure to note Sarsour’s bear hug of Farrakhan, “the pied-piper of hate,” is downright reprehensible, and gives a false hechsher (kosher stamp) to a purveyor of anti-Semitism.

Sarsour’s quote does not appear in the Hebrew version of this Haaretz article.