On September 12, 2022, the twitter account of the New York Civil Liberties Union accused religious Jews of diverting resources from New York public school students to lavishly fund Hasidic students.  The comments, which are evocative of familiar antisemitic tropes, referred to a retweeted article by the New York Times campaigning against Hasidic schools in New York State and turned it into a race-based attack against whites [in this case, meaning Jews] benefitting from the exploitation of students of color. 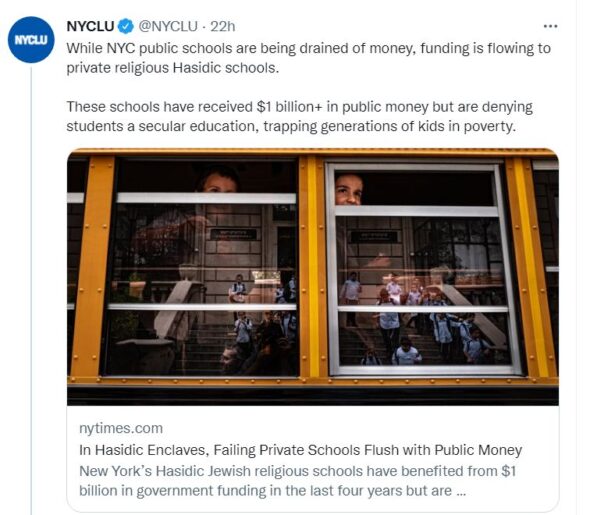 The NYT article that provided the fodder for the antisemitic tweet was published in anticipation of a scheduled vote by the New York Board of Regents regarding the enforcement of stricter regulations and greater oversight over the education provided by private and parochial schools.

Authored by Eliza Shapiro, Brian Rosenthal and Jonah Markowitz, the headline was “In Hasidic Enclaves, Failing Private Schools Flush With Public Money”(online) and “Failing Schools, Public Funds” (print). It consisted of a 6000-word description of the authors’ investigation of Hasidic schools that appeared as the front page, above-fold  feature of the 9/11 print edition of the newspaper and was the centerpiece of what appeared to be a journalistic campaign of allegations. An online appeal, complete with a form to submit, invited readers to share “stories” about their experiences with Hasidic schools.  (Although the word “negative” was not explicitly included, the context made clear that those were the types of stories being sought.)

In a subsequent article, “N.Y. State Vote Could Raise Pressure on Officials Over Hasidic Schools” (online Sept. 11, print Sept. 12) the authors recapped their charges, tying their report to the pressure being put on public officials to exercise greater oversight of these schools.  A third article published by the authors, “New York Lawmakers Call for More Oversight of Hasidic Schools” (online Sept. 12, print Sept. 13), again repeated the charges, implying their investigation had prompted the critical views being voiced by some state officials.

On September 13, the New York Board of Regents voted to adopt new regulations that would strengthen oversight of private and religious schools.  In his comments about the vote, New York City Comptroller Brad Lander cited the New York Times report as having made the failures of the Jewish yeshivas “starkly clear.”  It was an example of advocacy journalism that looked successful. The newspaper took the opportunity to reiterate the charges yet again in a fourth article, “New State Rules Offer Road Map for Regulating Private Hasidic Schools” (online Sept. 13, “Private Schools Told: Teach Students Basics Or Lose State Funding,” print Sept. 14).

Even before the  report’s publication in the New York Times,  anger surged within the Orthodox Jewish community regarding what they had already seen of the investigation and viewed as a campaign against Hasidic schools. ‘Pre-buttals’ to the report were written that refuted the charges brought by the New York Times and defended the education offered in private Hasidic schools. After the report’s publication, the Orthodox Jewish organization Agudath Israel put out a statement decrying what it called the “one-sided New York Times hit piece” on New York State’s Hasidic community.   On the other side of the debate, some Jewish representatives applauded the report, deploring its findings, while others focused solely on the report’s findings, urging fellow Jews not to dismiss them.  Outside the Jewish community,  editorial pages of the nation’s newspapers included both opinions that sided with the yeshivas and those that advocated for more government intervention.

The ramifications of the NYT campaign, however, extend far beyond providing a topic of intense debate or the government’s regulation of ultra-Orthodox schools.  The NYCLU was among the first to use the New York Times article as a vehicle to scapegoat Jews to further their race-based agenda, and it is still uncertain where all this will ultimately lead.

Choosing to spotlight and amplify failures and foibles of people within an already targeted community creates risks to the entire community. And the NYT’s relentless media campaign (i.e. their front page coverage and repetition of charges day after day) does just that, reinforcing the worst antisemitic stereotypes of the “other” and evoking ancient tropes of Jewish control and money grubbing.  There was no question that such a presentation would promote resentment and ill-will toward identifiable Jews in New York – a minority that is increasingly targeted with physical violence motivated by antisemitism.  It raises further, serious questions about the handling of the campaign, as well as the content of the analysis.

Amplification of a Limited, Local Story

If the goal of the exposé was solely to highlight educational deficiencies in Hasidic  New York state schools, why was it not presented as a local story in the New York section of the newspaper?  Why was it amplified with front-page coverage, reiterating the same inflammatory charges day after day, four days in a row?

The report does not merely address educational shortcomings within the yeshivas but reinforces antisemitic tropes and negative stereotypes of Jews through innuendo, implying Hasidic schools and leaders are deviously siphoning off public money for themselves to the detriment of others. Repeated insinuations of wrongdoing, coupled with decontextualized assertions and numbers, raise multiple questions about the reported findings. For example:

Assertion: “The Times found, the Hasidic boys’ schools have found ways of tapping into enormous sums of government money, collecting more than $1 billion in the past four years alone.“

Assertion: “Some government programs provide a disproportionate amount of aid to Hasidic schools, The Times found. The city voucher program that helps low-income families pay for child care now sends nearly a third of its total assistance to Hasidic neighborhoods, even while tens of thousands of people have languished on waiting lists.”

These are just some of the many questions raised about multiple, repeated aspersions that the report  casts on the Hasidic community. These aspersions are presented without context and without the rigorous evidence needed to support them.  And they are dangerous because they feed into anti-Jewish tropes about money, greed and exploitation, directed against an entire community of identifiable Jews.

Much of the report is based on the personal anecdotes of disgruntled, former Hasidim who left the fold and want to report their negative experiences. Indeed, the (above-mentioned) online appeal by the authors asking people to come forward and report their experiences in Hasidic schools is prefaced with the authors’ own charges against the school – “operating in violation of state education law,” “purposely denying students a basic secular education,” using “corporal punishment to keep children in line.” It all but ensures a self-selection bias that will mar any further investigation and raises concerns about what has already been reported.  The investigation, as presented, is both shoddy and irresponsible.

While New York Times journalists, editors and supporters no doubt view their investigation as a great success for advocacy journalism, a properly contextualized and statistically supported report is what was really called for.  This sort of shabby journalism, unfortunately, can only further incite those who seek to scapegoat Jews.