SEPT. 14 UPDATE: Reuters Revamps the Story, Addresses All Shortcomings Noted In This Post

Shortly after the publication of this post, and several hours after CAMERA's initial tweet about this problematic Reuters article on Iran, the news agency completely revamped the article, addressing all of the concerns described below. Changes include a completely different headline, the addition of IAEA and Western nation's concerns about the belligerent nature of Iran's nuclear program, and removal of the language which qualified Iranian threats to eliminate Israel as merely an Israeli claim. See below for a detailed update..

It is the inherent responsibility of news organizations to sift through unverified claims and allegations to ferret out truths and expose falsehoods. The Trust Principles, codified by Thomson Reuters in the midst of World War II, said it best: "Customers across the world depend on us to provide them with reliable and objective news and information."

Now, as the international community potentially finds itself in a very precarious crossroads — last month United Nations chief warned that “humanity is just one misunderstanding, one miscalculation away from nuclear annihilation” — journalistic integrity and careful independent reporting free of bias, the very values prized in Reuters' principles, are of paramount importance. 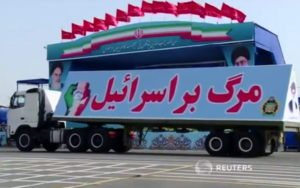 A screen capture from Reuters footage of an Iranian military parade, April 18, 2015. The banner reads 'Death to Israel.' Reuters casts Iranian threats to annihilate Israel as an unverified Israeli claim

Unfortunately, though, Reuters' article today on the highly tendentious Iran deal delivers just the opposite: packaging objective news as unverified claims and obscuring consensus assessments shared by Western nations and the International Atomic Energy Agency (IAEA) as nothing more than belligerent Israeli claims ("Iran urges IAEA 'not to yield to Israel's pressure', says ready to cooperate").

According to this narrative, the violent nature of Iran's nuclear program is merely an Israeli allegation, hardly an international concern voiced by the IAEA itself.

Israel, widely believed to be the Middle East’s only nuclear power, has pledged never to allow Iran to obtain atomic weapons, saying Tehran advocates its destruction. Iran denies ever seeking nuclear arms and says its atomic programme is peaceful.

At no point does Hafezi indicate that the IAEA itself, on its own independent steam, has voiced fears of an Iranian nuclear weapons program, positioning the issue well beyond a matter of Israeli claim or pressure.

Unless and until Iran provides technically credible explanations for the presence of uranium particles of anthropogenic origin at three undeclared locations in Iran and informs the Agency of the current location(s) of the nuclear material and/or of the contaminated equipment, the Agency will not be able to confirm the correctness and completeness of Iran’s declarations under its Comprehensive Safeguards Agreement. Because it has not yet done so, the Agency is not in a position to provide assurance that Iran’s nuclear programme is exclusively peaceful. (Emphasis added.)

But Hafezi is completely mum on the IAEA's findings, elliptically alluding to traces of uranium at undeclared Iranian sites while failing to report the IAEA's conclusion about Iran's refusal to cooperate on the matter. She selectively reports, cutting out the IAEA's critical takeaway regarding Iran's stonewalling about the unexplained particles:

The International Atomic Energy Agency's (IAEA) Board of Governors meets on Monday, three months after adopting a resolution urging Iran to give credible answers to the agency's investigations into uranium traces at three sites in Iran.

Reuters' Hafezi similarly conceals the Western powers' own suspicions about that Iran's nuclear program is intended for non-peaceful purposes. Thus, she reports:

Earlier this month, Iran sent its latest response to the EU's proposed text. But Britain, France and Germany said on Saturday they had "serious doubts" about Iran's intentions after it tried to link a revival of the deal with a closure of the IAEA's investigations.

Two days ago, the Western powers did indeed issue a statement expressing doubt about Iranian plans to return to a deal. Significantly, the statement also expressed serious doubts about the stated civilian purpose of Iran's nuclear program, noting:

In this final package, the Coordinator made additional changes that took us to the limit of our flexibility. Unfortunately, Iran has chosen not to seize this critical diplomatic opportunity. Instead, Iran continues to escalate its nuclear program way beyond any plausible civilian justification.

Strikingly, at no point does Hafezi report that the IAEA, Britain, Germany and France have all stated that they highly doubt Iran's nuclear program is peaceful, diminishing the concern as nothing more than a narrow Israeli charge. By ignoring the position of the international monitoring body and the Western nations, the Reuters reporter bolsters the Iranian narrative pinning responsibility for any impending clash on Israel.

Reuters further fails to uphold its Trust Principles by casting Iranian threats to destroy Israel — a factual reality — as nothing more than an Israeli claim (Israel "saying Iran advocates its destruction," emphasis added.)

.@Reuters: Israel SAYS Iran advocates its destruction. Why does Reuters qualify the plain fact that Iran calls for Israeli's destruction as nothing more than an unverified Israeli claim on par with Iran's ridiculous claim (Iran says) that its nuclear program is peaceful? 🤦🏼‍♀️ pic.twitter.com/F98vsnLoVy

To borrow language from the IAEA's measured (and ignored) report, this organization is not in a position to provide assurance that Reuters' Iran coverage is exclusively independent and free of bias.

Following the publication of this analysis, Reuters completely overhauled its article. The highly problematic version can still be accessed at The Jerusalem Post. Reuters' dramatic and commendable changes start with the headline, which shifted 180 degrees. The original headline underscored Iran's supposed cooperation and Israel's alleged belligerence, stating: "Iran urges IAEA 'not to yield to Israel's pressure', says ready to cooperate." The updated headline emphasizes Iran's obstinance and Germany's criticism of Iran, shifting the Iranian nuclear problem from a narrow Israeli complaint to a deep concern of the Western powers: "Germany says regrettable that Iran has yet to accept nuclear offer."

Moreover, a new first paragraph highlighting German regret about Iran's refusal to cooperate replaces the original paragraph which parroted Iranian claims that it is cooperating and suggesting that "Israeli pressure" is throwing water on the otherwise warm and fuzzy international atmosphere of cooperation. The original opening paragraph read:

Iran is ready to continue its cooperation with the UN nuclear watchdog, Iranian Foreign Ministry spokesman Nasser Kanaani said on Monday, calling on the agency "not to yield to Israel's pressure" over Tehran's nuclear activities.

Germany expressed regret on Monday that Tehran had not responded positively to European proposals to revive the 2015 nuclear agreement, underling the dim prospects for a deal soon, as Israel urged action to stop Iran becoming a nuclear armed state.

The updated article goes on to report in the second paragraph:

Two days after European powers said they had "serious doubts" about Iran's intentions over the deal, Iran said it was ready to continue cooperating . . . .

Finally, the amended article no longer presents Iranian threats to eliminate Israel as merely a Jewish claim (referring to Israel "saying Tehran advocates its destruction"). The updated piece now clearly and accurately reports that Iran "has called for the elimination of Israel."