When opposing sides disagree about the unclear circumstances of a particular event, media outlets have an obligation to report the accounts of both sides of the disputed incident. When it comes to the Israeli-Palestinian conflict, disputed Palestinian fatalities are a fixture.

Thus, when sources on both sides agree that a Palestinian youth was killed while he was attacking troops, the clarity and consensus it itself newsworthy.

Israeli forces shot and killed 15-year-old Yousef Mohammad Fathi Odeh today around 7 a.m. during armed clashes in the occupied West Bank village of Burqin, located near Jenin. He sustained multiple gunshot wounds after he picked up a firearm and fired at Israeli forces. (Emphasis added.)

Israeli forces shot and killed 15-year-old Yousef Mohammad Fathi Odeh today around 7 a.m. during armed clashes in the occupied West Bank village of Burqin, located near Jenin. He sustained multiple gunshot wounds after he picked up a firearm and fired at Israeli forces. pic.twitter.com/OKz907hSir

In addition, the Palestinian Center for Human Rights reported that Sobh was killed during clashes, and said nothing about him walking to school:

In Jenin, PCHR investigations indicate that Israeli military forces moved into Burqin, western Jenin, at approximately 04:30. IOF stationed between Burqin and al-Yamun villages and surrounded Mohammed Abul-Hasan al-Zar’yny’s (35) house. IOF demanded residents leave the house and surrender themselves. Meanwhile, a group of Palestinians gathered and threw stones at the IOF military vehicles; clashes erupted. At approximately 06:50, Usama Yasser Mohammed Sobeh (22) sustained an explosive bullet in the pelvis and rectum. He was taken to hospital in a critical condition; medical sources pronounced him dead at 08:00. Six others sustained wounds in the clashes that lasted until 07:10 when IOF withdrew from the area and arrested al-Zar’yny along with a 16-year-old child who was wounded in the clashes. The child was identified by Israeli media as Yusuf Mohammed Sobeh (16), and he later died in Israeli custody of his wounds. 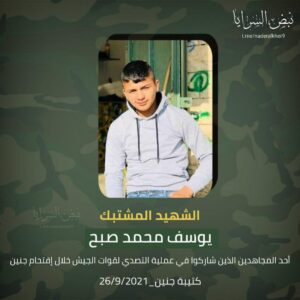 As for Sobh’s affiliation with Islamic Jihad, a PIJ-affiliated Telegram account published (and later deleted) the following post (screenshot at left):

The martyrdom of the Mujahid: Youssef Muhammad Sobh One of the Mushtabik [confronter / confrontation participant] who participated in repelling the storming of Jenin by the enemy army at dawn today. (Translation by CAMERA Arabic.)

The logo on the top right of this image is associated with Palestinian Islamic Jihad, a designated terror group.
The Israeli military spokespersons’ unit wrote to CAMERA UK on Sept. 29:  “The 16-year-old in question was shooting towards Israeli forces.”
Thus, while multiple Palestinian sources were consistent with the IDF account that he was a combatant, apparently only one unnamed uncle maintains that the boy was an entirely innocent child on his way to school. Unbelievably, instead of citing any of the multiple Palestinian sources which were in agreement with the military’s account, Reuters noted only the lone Palestinian source which contradicted the Israeli information. Reuters’ Ali Sawafta and Rami Ayyub wrote:

An uncle of one of the Palestinians killed said he was a 16-year-old walking to school when he was shot.
A military spokesperson said, “as far as we are concerned, all those killed were armed Hamas operatives, taking part in firefights”, but added he was checking the relative’s information.

While the DCI-P, PCHR, Telegram and army information detailed above was not necessarily available at the time of Reuters’ report, Reuters frequently updates reports as more information becomes available. A visit to the WayBackMachine Internet Archive demonstrates that significant updates were introduced after the story’s initial publication.
When presented with this information, however, Reuters declined to add information from the multiple Palestinian sources which agree that Yousef Sobh was not a child simply on his way to school.
See also “Telegraph Fails to Amend Article Suggesting IDF Killed Innocent Teen”