Nidal Nijm, the creator of Fursan al-Aqsa: The Knights of the Al-Aqsa Mosque, a new Steam video game which glorifies Palestinian violence against Israelis, can feel good about The Jerusalem Post‘s recent coverage of his new product.

Aaron Reich’s Sept. 29 article, originally headlined “New video game lets players ‘free Palestine’ and fight Israel,” gave extensive and admiring coverage to the game experience and to Nijm’s point of view, while completely ignoring the critics who panned it for promoting violence against Israelis and Jews.

Thus, the article had originally stated:

The game promises to let players take the role of Palestinian freedom fighters and break what it calls “the cliché of portraying Arabs as Terrorists.” 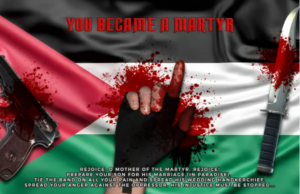 Significantly, there were no qualifying quotation marks around “Palestinian freedom fighters.” By failing to include quotation marks which would have indicated attribution to Nijm, The Jerusalem Post whitewashed Palestinian combatants who stab and shoot Israeli soldiers, per scenes described in the Daily Mail, or who sabotage the Iron Dome, endangering millions of Israeli civilians, another game mission described by Haaretz.

“You will play in missions across Palestine with many objectives to accomplish, epic battles, powerful guns, vehicles to drive, and more,” the game’s page on Steam notes. . . .

The story and gameplay combined promise a high-octane action experience, with the story taking place over adrenaline-packed missions on the ground, sea and sky. It will feature a wide variety of guns, settings, vehicles and even boss fights. . . .

NIJM HIMSELF has been working on this game alone for around 10 years, and the efforts do show in the initial trailers and gameplay footage. In it, one can see an alternating third- and first-person perspective, a variety of environments, with Falastini even using what appears to be bullet-time mechanics mid-combat as well as shouting “Allahu Akbar” – “God is Great.”

Fursan Al-Aqsa will also have a multiplayer mode. Rather than having an emphasis on online play, the multiplayer will be split-screen, which, in Nijm’s own words, is “to revive the golden era of 90s shooters.”

The article carried on in this vein, with additional complimentary paragraphs on the gaming experience, redacted here in the interest of brevity. Reich even included a positive review plucked straight from the Steam site:

“I’m really impressed with the quality of the animations – Ahmad’s actions all look amazingly fluid and natural, even with the game’s throwback vibe. This is a seriously terrific piece of work as well as an important perspective that we have never seen in a shooter before.”

While quoting a glowing review lifted from the platform’s site is something a PR agency might do, a journalist would also cite the critics, especially when it comes to a product involving the glorification of violence. When the media outlet is Israeli, and the product involves glorification of violence against Israelis, that obligation to cite the critics is heightened.

Indeed, both Haaretz (“Top Streamer Under Fire For Palestinian Video Game Calling to ‘Eliminate Israeli Soldiers“) and the Daily Mail (“Video game where gamers play as a Palestinian gunman assassinating IDF soldiers sparks fury in Israel“) focused on the critics – an angle that was apparent just from reading their headlines. (Emphases added.)

Luc Bernard, a Jewish game developer who created Imagination Is the Only Escape, a controversial Holocaust-themed game set in France, panned Nijm’s game, stating that while games should engage with “ongoing real world issues, [it] should not encourage violence.”

“As video game creators we are the biggest pillar of the entertainment industry, so we are responsible for what could inspire real world violence. And I don’t think this is the right kind of video game companies should be promoting,” he said.

The Simon Wiesenthal Center, an antisemitism watchdog group, called for the boycotting Steam, the world’s largest online market for video games, after it revealed it was planning on offering the game.

“There is no question that this game glorifies Palestinian terror against Jews and is not a neutral exercise,” Efraim Zuroff, director of the Simon Wiesenthal Center’s Israel office, said in an interview.

“This is something that praises and glorifies the worst type of terror and basically promotes a result which would cost hundreds of thousands of people their lives,” he said, adding that if Steam is “not willing to take it off then they should be boycotted.”

While ignoring the critics, The Jerusalem Post‘s Reich gives ample space to Nijm, quoting him, for instance:

“In this game, the player does not shoot Israeli civilians, women, children, elderly – only soldiers. Also in this game, there are NO images of sexual content, illicit drugs, religious desecration, hate speech against any group, ethnicity, or religion, [antisemitic] propaganda against Jews, Nazi propaganda, or boasting of any terrorist groups and/or other unlawful acts. This game only contains the virtual representation of the Palestinian Resistance Movement against the Israeli Military Occupation, which is officially recognized by the United Nations.”

Reich did not point out that the frequent proclamations in the game calling “from the river to the sea, Palestine will be free” indicate that, contrary to Nijm’s protestations, the message is opposition to Israel’s existence under any conditions and within any borders, and not simply against the Israeli military occupation. Nor does he point out that the game’s missions include the destruction of the Iron Dome, which constitutes a death knell for thousands of “Israeli civilians, women, children, elderly,” to borrow Nijm’s language.

Following communication from CAMERA’s Israel office, The Jerusalem Post amended certain elements of the article to better highlight the anti-Israel and violent nature of the game. Yet, the somewhat improved article still does not include comment from the game’s critics. Nor does it acknowledge that the game rejects Israel in any borders and that its missions include sabotage of the defensive Iron Dome, an act that means certain death for thousands of Israeli civilians, women, children and the elderly. 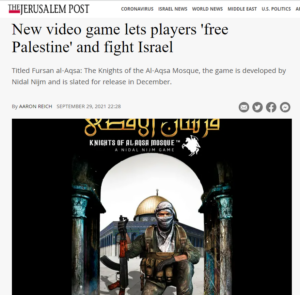 Screenshot of the original headings (CAMERA)

To the statement that “Falastini is out for revenge and to retake his homeland by joining the titular Fursan Al-Aqsa, a new Palestinian resistance movement,” the updated version adds: “that operates similarly to the terrorist organizations in the region.” (“Retake his homeland” is phrase that still requires editing, as Palestinians historically never had sovereignty over any part of Israel, the West Bank or Gaza Strip. Only with the signing of the Oslo Accords in the 1990s was Palestinian rule established for the first time in parts of the West Bank.)

While the updated article still does not include a single word from critics like Luc Bernard and Efraim Zuroff who slammed the game for glorifying violence, it does note: “Though user reviews are not yet available, those who have played the demo have given it positive reviews.”

While the endorsement – (“I’m really impressed with the quality of the animations”) – from game journalist Ian Boudreau no longer appears, Nijm nevertheless has ample cause to be satisfied with The Jerusalem Post coverage.