An Agence France Presse article yesterday, “Virus cases spike in Israel-blockaded Gaza: ministry,” misleadingly stated that Israel’s Kerem Shalom crossing with the Gaza Strip was closed last month, preventing fuel deliveries to the coastal territory, but neglected to note that the crossing has since been reopened and fuel deliveries have resumed. 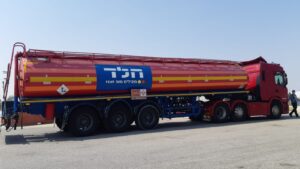 A truck carrying fuel at the Kerem Shalom crossing into the Gaza Strip, September 2020

However, as the French version of the same article noted, the crossing opened again just over a week ago. AFP’s French article reported (translation by InfoEquitable):

The Hebrew state had then decided to tighten its blockade by stopping fuel deliveries, resulting in the closure of the only power plant in Gaza for two weeks. The enclave was then deprived of electricity for most of the day, as were its hospitals, until an agreement was reached with Hamas at the end of August. Schools, mosques and markets are still closed to fight against the spread of the virus.

In a separate article, AFP had rightly reported in English on Aug. 31:

COGAT, the Israeli defence ministry unit that oversees civilian affairs in the occupied Palestinian territories, said in a statement that after “efforts to calm the situation”, it would “resume the routine activity of the Kerem Shalom Crossing, including the entry of fuel products”, starting Tuesday.

As for yesterday’s headline, the English version cited “Israel-blockaded Gaza,” despite the fact that Egypt’s blockade of the Gaza Strip is much more stringent than Israel’s. The French headline, which did not mention either blockade, was: “In the Gaza Strip, the number of cases have increased ten-fold in the last two weeks.” The Arabic headline, for its part, noted that the Gaza Strip is blockaded, but specified neither Israel nor Egypt: “A great increase in Covid-19 infections in the blockaded Gaza Strip.”
Donate Now