A sitting US Congressperson has attended a rally at which another speaker seemed to call for airline hijackings in service of the Palestinian cause.

On May 15 in Dearborn Michigan, Osama Siblani, the publisher of the Arab American News, spoke at an Arab Nationalist rally. According to a recording from MEMRI, he used his speech, partially in English and partially in Arabic, to extoll “martyrs,” and to advocate against even the 1949 armistice lines. Most shocking, however, was when Siblani appeared to call for airplane hijackings in service of his cause:

In case there was any ambiguity to his meaning, his lowered voice before uttering the word “planes,” should not leave any doubt. 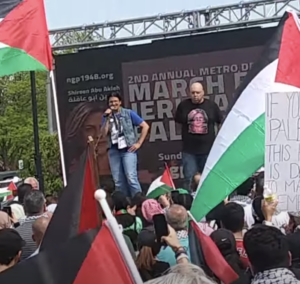 Astoundingly, a sitting US Congresswoman was in attendance at the same rally. This, too, was reported by MEMRI, and this photo of Representative Rashida Tlaib in Siblani’s paper confirms it. According to video posted on rally organizer Amr Zahr’s Facebook page, Siblani spoke about ten minutes after Representative Tlaib.

The Jewish Journal, the Jerusalem Post, and JNS have all covered the story. The Washington Free Beacon has covered it as well. A local outlet that covered the rally obscured the calls to violence that took place. Yet, the mainstream American press has failed to prominently cover it.

While seeming to advocate for airline hijackings may be the most shocking statement that Siblani has made, it’s not really that much of a departure from his past. The ADL writes,

Many Arab American News articles express sympathy, if not outright support, for Hezbollah and Hamas. These articles are in line with Osama Siblani’s own statements of support for the terrorist organizations. In 2006, Siblani told the Chicago Tribune: “If the FBI wants to come after those who support the resistance done by Hezbollah, then they better bring a fleet of buses. I for one would be willing to go to jail.” In 2004, Siblani told the The Washington Post that Al Manar, Hezbollah’s TV station, enjoys popularity among Arab Americans because of its strong support for “resistance against Israeli occupation… I disagree with the State Department that it incites violence.”

In 2003, Siblani again expressed his support for terrorist groups when he told the Washington Post: “Mr. Bush believes Hezbollah, Hamas and other Palestinian factions are terrorists, but we believe they are freedom fighters.” When senior CNN Middle East News Editor Octavia Nasr was fired in 2010 after publicly mourning the death of a Hezbollah leader, Siblani commented, “This is unbelievable what is happening in the United States of America. You can say anything you want- except when it comes to Israel.”

Given his history, one might wonder why a sitting member of Congress would share a platform with him at all.

Moreover, the rally was organized by Amr Zahr, an anti-Israel activist who has been criticized in the past for antisemitic remarks. Tlaib’s association with Zahr has also been the subject of criticism in the past, yet she still attended a rally that he organized.

The rally took place one day before Tlaib introduced a resolution in Congress calling for U.S. recognition of the “Nakba.” (“Nakba,” or “catastrophe,” is a reference to the founding of the state of Israel in 1948.)

And so far no journalists have asked Representative Tlaib what she thought of Siblani’s outrageous calls for violence delivered that day, or any of his past comments, or why she would attend such an event to begin with.