In Jerusalem yesterday, Old City streets and alleyways were awash in blue and white, as thousands of Israel youth took part in the Flag March, singing songs to mark Jerusalem Day, or the reunification of the city in 1967. Some engaged in violent clashes with local Palestinians. Some chanted hateful slurs, inciting violence.

Just over two weeks earlier, nearby streets in eastern Jerusalem were studded in red, green, black and white as thousands of Palestinians turned out for the funeral of Al Jazeera journalist Shireen Abu Akleh, many waving flags. Some engaged in violent clashes with Israeli police. Some chanted hateful slurs, inciting violence.

The were many clear parallels between the two competing displays of national sentiment.

But the international press didn’t see it that way. Or, more precisely, they didn’t report it that way.

The glaringly inconsistent application of the term, often perceived as pejorative, is on colorful display in abundance of articles, headlines and photo captions. These skewed items prominently broadcast journalistic bias like so many flapping flags proudly signaling national fervor.

Thousands of flag-waving Israelis on Sunday marched through Jerusalem’s Old City during a nationalist procession that regularly stokes Palestinian anger, a year after Jerusalem tensions exploded into war.

In contrast, AFP avoids describing Palestinian nationalistic behavior as just that.  “Many Palestinians flew flags,” and “a Palestinian flag was flown from a drone,” AFP reported without deploying the pejorative n-word.

Police reported that Palestinians had thrown rocks towards them from inside the mosque.

Police said they had warned the crowd to stop “nationalistic” songs and were forced to act as “violent rioters (were) trying to disrupt the proper course of the funeral.”

As reported by Times of Israel, among the nationalistic Palestinian chants heard at Abu Akleh’s funeral was “Let the olive branch fall and raise the rifle.” AFP’s coverage ignored these slogans.

AFP’s double standard on Palestinian versus Israeli nationalists are efficiently packaged in the news agency’s photo captions. Members of the Democratic Front for the Liberation of Palestine terror organization, brandishing weapons and traipsing over an Israeli flag as the Palestinian flag flutters in the background, are said to be denouncing Israel’s “nationalist ‘flag march.'” But DFLP’s own militaristic display literally trampling on another nation’s symbol of sovereignty? AFP editors, seemingly oblivious to the irony, detect no nationalism there. 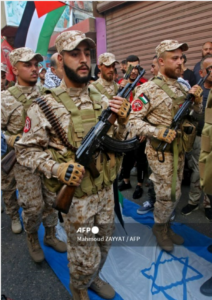 Fighters from the Democratic Front for the Liberation of Palestine (DFLP) step on an Israeli flag during a demonstration to denounce the annual nationalist “flag march” through Jerusalem, at the Ain el-Helweh camp for Palestinian refugees near Sidon in southern Lebanon on May 29, 2022. Mahmoud ZAYYAT / AFP

Associated Press captions referencing the Israeli flag march are likewise extremely revealing. Palestinians surrounded by a sea of Palestinian flags participate in “a march,” with no descriptive label. But the Israelis marching with their national flag blanketing the streets? Israelis, uniquely, take part in a “nationalist parade.” 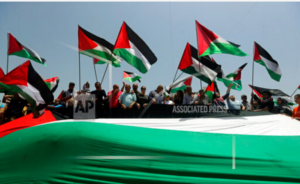 Lebanese and Palestinians hold a giant Palestinian flag during a march in support of Palestinians, in the southern port city of Sidon, Lebanon, Sunday, May. 29, 2022. Nearly 2,000 Jewish pilgrims visited Jerusalem’s most sensitive holy site early Sunday ahead of a nationalist parade through the Old City. (AP Photo/Mohammed Zaatari)

Even when screaming members of Palestinian terror organizations brandish weapons, and their juvenile admirers wave toy guns, AP captions finds nationalism only in the Israeli parade. 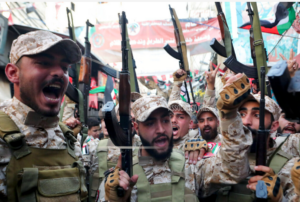 Members of the Democratic Front for Liberation of Palestine chant slogans as they hold up their rifles during a protest in support of Palestinians, at Ein el-Hilweh refugee camp, in the southern port city of Sidon, Lebanon, Sunday, May 29, 2022. Nearly 2,000 Jewish pilgrims visited Jerusalem’s most sensitive holy site early Sunday ahead of a nationalist parade through the Old City. (AP Photo/Mohammed Zaatari) 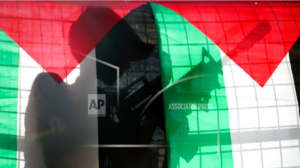 A Palestinian boy holds a toy rifle as he stands behind Palestinian flags during a protest in support of Palestinians, at Ein el-Hilweh refugee camp, in the southern port city of Sidon, Lebanon, Sunday, May 29, 2022. Nearly 2,000 Jewish pilgrims visited Jerusalem’s most sensitive holy site early Sunday ahead of a nationalist parade through the Old City. (AP Photo/Mohammed Zaatari)

Thousands of Israeli nationalists, some of them chanting “Death to Arabs,” paraded through the heart of the main Palestinian thoroughfare in Jerusalem’s Old City on Sunday, in a show of force that risked setting off a new wave of violence in the tense city. …

As the march got underway, groups of Orthodox Jewish youths gathered outside Damascus Gate, waving flags, singing religious and nationalistic songs, and shouting “the Jewish nation lives” before entering the Muslim Quarter. One large group chanted “Death to Arabs,” and “Let your village burn down” before descending into the Old City. …

Thousands of people normally take part in the march through the Muslim Quarter, including some who shout out nationalistic or racist slogans toward the Palestinians, before making their way to the Western Wall in the Jewish Quarter on the other side of the Old City. …

Ahead the march, there were small scuffles between Israeli nationalists and Palestinians, who threw chairs and bottles and shouted “God is great” at the marchers.…

Among the visitors was Itamar Ben-Gvir, leader of a small ultranationalist opposition party and a follower of the late racist rabbi, Meir Kahane, who entered with dozens of supporters under heavy police guard.

The article reports: “At the funeral, thousands of people, many waving Palestinian flags and chanting: ‘Palestine! Palestine!'” Note the “people,” as opposed to “Palestinian nationalists.” And while AP’s coverage of the Israeli parade twice referred to chants of “Death to Arabs,” the news agency’s coverage completely ignored the Palestinians’ threats to “Let the olive branch fall and raise the rifle.” It reported the less belligerent “Palestine! Palestine!” along with the more aggressive: “We sacrifice our soul and blood for you, Shireen.”

Unlike its coverage of Israeli “nationalist or racist slogans,” AP refrains from using this language to describe the Palestinian chants. Instead, AP cites Israeli police accusations (“police said”) about Palestinian “nationalist incitement,” using scare quotes to distance the reporter from that language:

Equivalent behavior from Palestinians and Israelis elicits grossly disparate coverage. The blatant inconsistencies signaling journalistic bias are about as subtle as calls to “Let the olive branch fall and raise the rifle.” Only the willfully blind could ignore them.