In covering Hanan Ashrawi’s online announcement of her resignation, the media mavens find nothing about which to criticize Hanan Ashrawi and obviously can’t be expected to notice that the PLO logo includes a map that depicts all of Israel as Palestinian land: 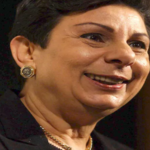 (December 9, 2020): Consistent with my lifelong commitment to the principles of integrity and transparency, I would like to state the following pertaining to my resignation from the PLO Executive Committee: I met with President Mahmoud Abbas on 24 November, 2020 and we had a candid and amicable discussion in which I informed him of my decision to resign from the Executive Committee, effective the end of the year…

The Palestinian political system needs renewal and reinvigoration with the inclusion of youth, women, and additional qualified professionals. It is incumbent upon us all to assume our individual responsibilities and to carry out our duties with honesty and integrity, including by facilitating this needed change. As I have reaffirmed to President Mahmoud Abbas, I will continue to serve the Palestinian people and our just cause in every capacity, albeit outside public office.

Who is Ashrawi kidding about the Palestinian government when she said: “The Palestinian political system needs renewal and reinvigoration with the inclusion of youth, women, and additional qualified professionals.” It obviously needs a lot more than that.

First, the head of the PLO and Palestinian Authority (PA), Mahmoud Abbas, is now in the 15th year of what was supposed to be a single elected four-year term. And what Human Rights Watch said in 2018 is just as true today:

In the 25 years since Palestinians gained a degree of self-rule over the West Bank and the Gaza Strip, their authorities have established machineries of repression to crush dissent, including through the use of torture.

Both the Fatah-dominated Palestinian Authority (PA) in the West Bank and the Islamic Resistance Movement (Hamas) in Gaza have in recent years carried out scores of arbitrary arrests for peaceful criticism of the authorities, particularly on social media, among independent journalists, on university campuses, and at demonstrations. As the Fatah-Hamas feud deepened despite attempts at reconciliation, PA security services have targeted supporters of Hamas and vice versa. Relying primarily on overly broad laws that criminalize activity such as causing “sectarian strife” or insulting “higher authorities,” the PA and Hamas use detention to punish critics and deter them and others from further activism. In detention, security forces routinely taunt, threaten, beat, and force detainees into painful stress positions for hours at a time.

The Associated Press (AP) and Reuters coverage of the event, used by a multitude of media outlets large and small, merely echoed the resignation announcement and depicted Ashrawi only in positive terms. Meanwhile, CNN’s Amanpour even partnered with Ashrawi to defame Israel.

Ashrawi, who holds a doctorate in comparative literature from the University of Virginia, is a fluent English speaker who has been a prominent spokeswoman for the Palestinian cause in the global media for decades.
She has held several senior posts and participated in numerous rounds of peace negotiations, but has also been an outspoken critic of Israel’s occupation of the West Bank and of U.S. policies that she says have supported Israeli practices and undermined Palestinian hopes of establishing an independent state on lands captured by Israel in 1967. She is also one of few women or Christians to hold a senior post in the Palestinian leadership.

In recent years, Ashrawi had become a vocal critic of the 85-year-old Abbas’ autocratic rule and reliance on a small inner circle of men in their 70s and 80s.

In addition to echoing the Palestinian anti-Israel propaganda line, AP failed to provide any information (or a Web link) documenting any such Ashrawi criticism of Abbas.

Following the signing of the Oslo Accords with Israel in 1993, Ashrawi served in the cabinet of the newly-formed Palestinian Authority, which has limited self-rule in the West Bank. A champion of women’s rights, Ashrawi was the first woman elected to the Executive Committee in 2009.

Ashrawi and Amanpour: a symbiotic relationship

In the wake of her resignation, Ashrawi (in Ramallah, West Bank) was interviewed by Christiane Amanpour, CNN’s Chief International Anchor (in London) on Dec. 15, 2020. 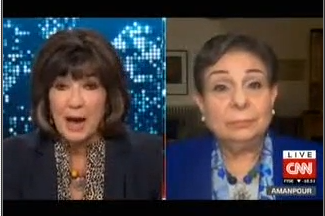 In her lead-in to the interview, Amanpour opined: “The Trump administration is pushing through a series of agreements between Israel and the Arab world… And they did so without resolving the crucial unfinished business that blocked such deals until now, and that is Israel’s failure to reach a comprehensive peace agreement with the Palestinian people.”

This wording putting the onus on Israel for peace, while ignoring Palestinian intransigence, is clearly biased as is typical for Amanpour.

Amanpour characteristically failed to challenge any of Ashrawi’s lies or distortions:

Israel is, of course, the most effective and dominant party, as the occupying power, that has undermined any process at reconciliation…

There is violence by the Israeli army every day. You have people beaten up, killed, detained without question. Violence is being exercised in a systematic and organized and official manner by an army against a captive Palestinian people…

The fact that Palestinians are being treated as a captive people with no rights whatsoever, and Israel acts with full impunity, without any kind of intervention or accountability…

The issue of Palestine did not come as a result of something that we build or my parents and grandparents, it’s a question, it’s a fact of creating the State of Israel on our land, of creating the tragedy of the refugees, of maintaining a situation where the Palestinians, the indigenous people in Israel became second, third, fourth class citizens. And in the occupied property, we are no right. We were treated as subhuman species…

Near the close, Amanpour pointed out:

You’re a Christian. You’re a woman in politics. You went to the Quaker School, and the Quakers have a peace and pacifying philosophy and you went to the American University in Beirut where you learned, obviously, fluent English. How much of that childhood and that — those formative experiences kind of prepared you to be a moderate voice for peace? 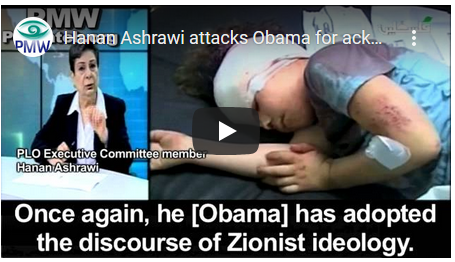 Look at the most dangerous thing that Obama said to [New York Times journalist] Thomas Friedman. Once again, he [Obama] has adopted the discourse of Zionist ideology. He adopted it when he came to this region, speaking about the Jews’ return to their land, and that this is a Jewish state, the Zionist dream, and so on. Obama’s adoption of the discourse of extremist Zionist ideology and his turning it into a basis for political decision-making is dangerous.

Ashrawi, sounding here more like an extremist rather than a moderate, falsely portrays Obama as pro-Zionist. CAMERA’s Sean Durns, analyzing Obama’s recent memoir, writes, “Obama’s inability—or perhaps unwillingness—to see Hamas for who they are is part and parcel of a broader trend evidenced in his memoirs. The United States’s 44th president repeatedly strikes a false equivalency between Israel and the terrorists who seek the Jewish state’s destruction.”

Unchallenged phraseology condemning Israel for occupation, settlements, violence, treating Palestinians “as a captive people with no rights whatsoever” and so-forth is either false  or misleading.  And as to “undermining any process at reconciliation,” the Palestinian Authority insists on various conditions unlikely to be accepted by any Israeli government before peace negotiations can take place, including Israel abiding by Palestinian refusal to recognize Israel as a Jewish state and Israel’s acceptance of a “right of return” for millions of Arabs (nearly all of whom have never lived in Israel), which would inevitably result in the Jewish state becoming unviable.

Furthermore, making any peace agreement difficult to work, if not impossible, is the recurring violence incited by longstanding and relentless anti-Israel and anti-Jewish invective from Palestinian leadership, media, mosques and schools. Such incitement to violence violates Article 26 (2) of the U.N. Universal Declaration of Human Rights, as well as Israeli-Palestinian agreements.

Ashrawi’s deceptiveness is an old story

Ashrawi, like her fellow Palestinian leaders, deeply resents the presence of Jewish communities in the West Bank. This resentment extends to usage of the biblical name “Judea and Samaria” for the West Bank. For example, Ashrawi registered outrage as a spokesperson for the Palestinian delegation during a news conference in 1991 at the Middle East Peace Conference in Madrid, Spain. Ashrawi was asked a question by a representative of the Religious Broadcasters Association of the United States:

I find your reference to ‘Judea and Samaria’ a statement of extreme bias, and rather offensive. I am a Palestinian Christian, and I know what Christianity is. I am a descendant of the first Christians in the world, and Jesus Christ was born in my country, in my land. Bethlehem is a Palestinian town. So I will not accept this one-upmanship on Christianity. Nobody has the monopoly.

(Source for the foregoing: The Washington Post, “The Practiced Palestinian,” Caryle Murphy, Nov. 4, 1991.)

But if Ashrawi is in fact a “descendant of the first Christians in the world,” as she describes herself, she would be a descendant of Israeli Jews not the descendant of Arabs as she is presumably. Furthermore, although Ashrawi resents the term “Judea and Samaria,” Jewish names for the West Bank, the names are mentioned in the Christian New Testament in passages Matt. 2:1, Acts 1:8 and Acts 8: 1,5,9,14.

All of this is in the context of land resided in mainly, if not entirely, by Israeli Jews. This was a thousand years before the establishment of the first Arab communities in the Holy Land which happened well after conquering Muslim Arab armies had swept across the continent from the Arabian Peninsula in the seventh century C.E.

Moreover, as a professed Christian, Ashrawi should know that the word “Palestine” (or any variant of it) is nowhere to be found in the Christian New Testament. Furthermore, the name “Bethlehem” for her “Palestinian town” is a transliteration into English of the Hebrew (Israeli) name for the original Jewish Israeli town (which Bethlehem was), “Beit Lehem” meaning “House of Bread.”

A November 2000 CAMERA report, Hanan Ashrawi’s Propaganda, documented how Ashrawi “makes an emotional case in a rapid-fire, filibuster style of expression that flouts historical fact and present reality. All too often, her interviewers are unequipped or unwilling to challenge the barrage of inaccurate and distorted statements.” This appraisal is just as accurate in 2020 as it was in 2000.

Paraphrasing Shakespeare – pertaining to Ashrawi: “Deception is thy name, condemning Israel and America — thy game.”

Likewise, pertaining to much of the mainstream media regarding the conflict with the Palestinians: “Malpractice is thy name, blaming Israel and U.S. Support — thy game.”