Earlier this week, following news of Rashida Tlaib’s “Nakba Day” bill, MSNBC host Mehdi Hasan delivered a four-minute rant about “Nakba Day,” the term given by Palestinians for the anniversary of their failed effort to destroy the newly born State of Israel. The conclusion of Hasan’s rant was to imply Israel was guilty of “ethnic cleansing.” In reaching that conclusion, Hasan relies on what he admits are “revisionist” historians like Ilan Pappe.

Like Pappe, Hasan rewrites history not by exposing new facts, but by omitting facts and context.

“Nakba Day commemorates the catastrophe endured by Palestinians during the creation of Israel in the late 1940s.”

What actually happened? On November 29, 1947, the United Nations voted in favor of the “partition plan,” which would have created a Jewish and an Arab state in the Mandate Palestine area. The Palestinian Jews, despite serious misgivings, accepted the proposal. The Palestinian Arabs rejected it.

The very next day, Arab attacks on Jewish targets began, including, in the early morning hours, the murder of Jewish passengers aboard two buses near the town of Kfar Sirkin. An Arab Higher Committee manifesto that day declared “Kingdoms are established over dead bodies and skulls. Palestine is our land.” Despite the outbreak of violence, even British intelligence reports admitted, “So far, the Jews have kept themselves fairly well in hand, but if the Arabs continue their attacks, retaliation by the dissidents, probably the Hagana too, will be inevitable.” 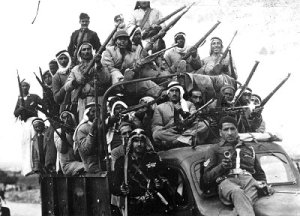 Palestinian fighters during the 1947-1949 War of Independence.

Between November 1947 and May 1948, Palestinian Arab attacks continued with overt support from neighboring Arab states. On May 12, 1948, over 240 fighters and civilians of Kfar Etzion were massacred. Just a few days later, on May 15, 1948, the day after Israel declared independence, the surrounding Arab armies officially declared war on the Jewish state and invaded, joining the Palestinian Arabs’ attempt to eliminate the Jewish presence in Israel. Arab League leaders proudly declared, “this will be a war of extermination and momentous massacre which will be spoken of like the Mongolian massacre and the Crusades!”

In short, the Palestinian Arabs didn’t “endure” a catastrophe. They were not passive actors. They actively started a war of aggression, tried to obliterate the Jewish state in its infancy, and massacred Jewish civilians. In the end, the Israelis suffered a horrifying casualty rate in their war for survival that, if applied to the population of the United States today, would amount to approximately 2.6 million American deaths.

Hasan’s revisionism then turns to “international law,” when he claims:

“Today, the Palestinians continue to demand their rights under international law. Back in December 1948 the United Nations General Assembly reacted to the Nakba and the resulting Palestinian refugee crisis by passing resolution 194 which said, quote, ‘refugees wishing to return to their homes and live at peace with their neighbors should be permitted to do so at the earliest practicable date.’”

Resolution 194 does not create any “rights.” Even the very language Hasan quotes is not in the language of a “right.” To the contrary, it is worded as a recommendation (“should”) and is explicitly conditional on those refugees also being willing to “live at peace with their neighbors.” Considering the repeated wars and attacks launched against the Jewish state, and the fact that when the Palestinians last held an election, they voted for a terrorist organization that explicitly calls for Israel’s destruction, that condition has not been met.

Moreover, resolution 194 is not even “international law.” The resolution was adopted by the General Assembly, which has no binding powers and is limited to making recommendations.

Hasan’s claim of a legal “right” to “return” is objectively false. If he believes it to be a moral right, that’s his opinion. But to claim it as a legal right is baseless.

Hasan also claimed that 74 years after the “Nakba,” there are still millions of Palestinian refugees. Presumably, the host is relying on the unique UNRWA definition of a refugee applied only to Palestinians, a political definition far broader than that used for all other peoples. For example, if a Syrian refugee was to acquire American citizenship, she would cease to be classified (see article 1(C)(3)) as a refugee. Contrast that with, for example, Rashida Tlaib – the cosponsor for the “Nakba Bill” – who is still considered a “refugee” under the UNRWA definition notwithstanding her American citizenship and considerably powerful position as a member of Congress.

Further exposing the absurdity of such a definition, Hasan claims that those Palestinians residing in the West Bank and the Gaza Strip are “refugees.” In other words, individuals who never left their homes are somehow considered “refugees.”

A statement by then Secretary of State Mike Pompeo regarding UNRWA refugee numbers.

The MSNBC host has recently displayed a willingness to apply double standards to demonize the Jewish state. As his latest rant demonstrates, his repertoire of dishonesty also includes the use of revisionist history.