In a completely biased report slamming Israel for allegedly “pick[ing] off” unarmed demonstrators, MSNBC’s Chris Hayes discards any semblance of journalistic professionalism and embraces Hamas propaganda. The MSNBC hosts insists that the figure that he provides for the number of Palestinians wounded by Israeli live fire during the Gaza border “March of Return” (March 30) are sound despite the fact that it is unconfirmed data supplied by a terror group which has a long history of manipulating casualty statistics to suit its propaganda purposes. In April 4‘s “All in with Chris Hayes,” he states:

Yesterday, President Trump and Israeli Prime Minister Benjamin Netanyahu had a phone call. And according to the White House readout that they put out afterwards, apparently the two did not talk about what was probably the most important thing for them to talk about, and that’s the fact that just a few days ago, Israeli troops shot more than 750 Palestinians, killing at least 15. Yes, that is the correct number, more than 750 Palestinians shot, at least 15 dead.

In addition, the accompanying text also states as fact that 750 Palestinians were shot.

How is Hayes so certain “that is the correct number,” that “that’s the fact,” given that the information is supplied by Gaza’s Health Ministry, meaning Hamas? At no point does Hayes attribute the unconfirmed information to Hamas, and nowhere does he point out that the United States, the European Union, Canada and Israel have all attributed Hamas as a terror organization, making it an unreliable source at best. Indeed, no source has independently verified Hamas’ figure. While Hayes conceals the fact that the Western powers regard Hamas as a terror organization, he notes only that “defenders of Israeli military’s actions will point out” that Hamas “rules Gaza in a thuggish and anti-democratic manner, and . . . uses violence and terror in its campaign against Israel.”

The Israeli army, for its part, has disputed Hamas’ figure for those injured by live fire, saying that dozens, not several hundred, were hit by live bullets during the March 30 mass protests, backed by Hamas.

Unlike Hayes, other media outlets professionally reported Hamas’ claim as just that, as opposed to casting it as fact. Guardian, for instance, a source hardly biased in Israel’s favor, noted that the figures originated with the ministry of health, and added: “The Guardian was unable to independently verify the ministry’s figures.” Similarly, The New York Times noted that Gaza health sources provided the figure of hundreds injured by live fire, and also reported:

Brig. Gen. Ronen Manelis, the chief army spokesman, described that as “nonsense” in an interview on Sunday, saying the number of live fire injuries was more likely in the dozens, with the rest hit by rubber bullets or tear gas.

Hayes also trumpeted the supposed reliability of two videos as “evidence,” despite the fact that it is not at all clear that they show what Hayes claims they show. Thus, charging Israeli snipers with “pick[ing] off protesters,” he states:

[Israel’s defenders] will also note that at this particular protest, there were some protesters who threw rocks and Molotov cocktails and rolled burning tires at the border fence, all of which is true, but in no way justifies what Israeli soldiers appear to have done, which is perch on a hill and pick off protesters with sniper fire, much of it recorded for all to see, like for instance this video which sows live shots being fired at a teenager as he runs through an empty area to retrieve a tire, or the shooting of this young many as he prayed near the border fence.

Hayes alleges that Israeli snipers rained down live fire on the mass of protesters, killing 15 and injuring 750, “much of it recorded for all to see.” But then refers to and shows just two examples of “video evidence,” neither of which actually corroborates that Israeli snipers fired on unarmed people. In one, something is shot or thrown from an unseen source at a Palestinian man as he runs towards a tire with a cheering crowd in the background. In a longer version of the video not shown on MSNBC, the man is apparently hit in the back right before he reaches a group of men. The video does not reveal what or who apparently hit him. In the second clip, a man rises from prayer, walks hunched over a few paces, and then is picked up by several men. No shooting can be seen at all in this clip. Other media outlets which reported about these videos more carefully said that they “appear[ed] to show” unarmed demonstrators being shot by Israelis, avoiding Hayes’ definitive language. 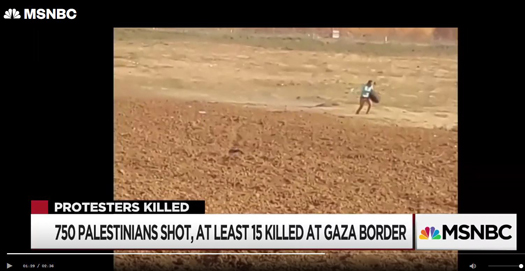 Hayes, who at one point mischaracterizes the weeks-long “March of Return” as “a six-week sit-in,” downplays the threat that Israeli troops at the border faced by some in the crowd. Regarding violence among the protesters, he states only that some “threw rocks and Molotov cocktails and rolled burning tires at the border fence,” which, he says, “in no way justifies what Israeli soldiers appear to have down, which is perch on a hill and pick off protesters with sniper fire.” But Hayes ignores that among the protesters were gunmen who fired on troops and attempted to break through the fence, a fact “recorded for all to see” in video evidence which Hayes, this time, withholds from viewers. 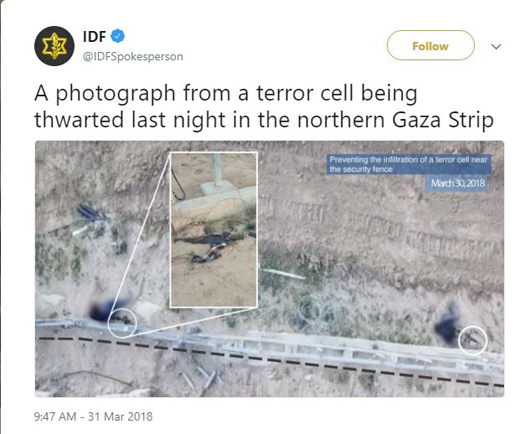 Incidentally, the IDF identified Abdel Fattah Abd al-Nabi, the man with the tire in the first video who was apparently shot, as a Hamas fighter. According to the IDF, he was one of 10 identified as a terrorist among the first 15 fatalities. Hamas, for its part, published its own list of fighters, identifying five of those killed as members of the terror group. Hamas’ acknowledgment of these fighters drew criticism from Palestinians in Gaza, who fear that the release of such information erodes the image of an oppressive Israeli army mowing down peaceful protesters. But even Hamas’ own acknowledgment of the fighters among the fatalities did nothing to sway Hayes, who clung to the false image of Israeli snipers “pick[ing] off” unarmed demonstrators at a “sit-in.”