Thank you to CAMERA Arabic for the translation and analysis.

On April 23, video of a conversation involving Muna El-Kurd was posted on an Instagram account, during which El-Kurd begins by urging someone named Fathi not to suggest that there are Jews (not Zionists, not Israelis, but Jews) in solidarity with Palestinians. Fathi responded that yes, there is a Jew from the “left-wing” there. At this point, El-Kurd angrily interjects:

This statement, at best, is an open call for “Palestine” to be ethnically cleansed of Jews. This would include all of Israel, considering that she openly declares that “Palestine” is from “its sea to its river.” Considering that polls show that as many as 95% of American Jews have favorable views of Israel, the embodiment of Zionism, it seems Muna has some rather dehumanizing terminology for diaspora Jews, too. Referring to Jews as “dogs” is a common antisemitic term, particularly among Palestinians and even among antisemites at the United Nations. Chants of “Jews are our dogs” are heard fairly regularly at demonstrations. No matter what way you slice it, Muna’s words are deplorable and overtly bigoted.

The statement also exposes the emptiness of the supposed “principles” of individuals like El-Kurd. While openly calling for the ethnic cleansing of Jews, her social media accounts are replete with cries to “#EndEthnicCleansing.” It’s yet another example of how much of anti-Israel activism is not about principled human rights, but about the destruction of the Jewish state and the denial of Jewish self-determination. 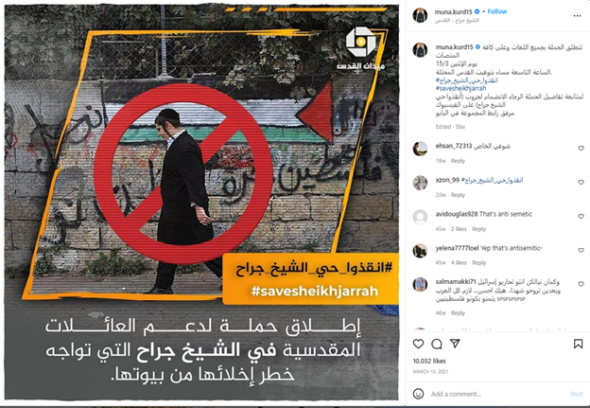 What makes this all the more disturbing is that this is the woman the media has fawned over for the last year. TIME named both her and her twin brother Mohammed among its list of the “100 most influential people” in 2021, claiming they “challenged existing narratives about Palestinian resistance…humanizing the experiences of their neighbors. Charismatic and bold, they became the most recognizable voices of those threatened with losing their homes in Sheikh Jarrah.” In July 2021, The Times published a glowing profile of the two that, as CAMERA-UK wrote, “resembles a Palestinian Solidarity Campaign (PSC) press release.” The Financial Times claimed Muna and her brother’s “calls for justice echo the same values of equality that fuel global campaigns such as Black Lives Matter.”

Apparently, the value of equality includes referring to Jews as “dogs” and calling for them to be ethnically cleansed.

The media cannot claim they could not have known about El-Kurd’s extremism. Social media posts from long before her 2021 rise to fame displayed open antisemitism and frequent praise for infamous terrorists like Dalal al-Mughrabi, who led the Coastal Road Massacre terrorist attack, murdering 38 Israelis, including 13 children.

But this story is not just about media outlets riding catchy, profitable narratives at the expense of actual journalistic investigation. It’s also a story about the radical Jewish left and the role they’ve played in normalizing this extremism. 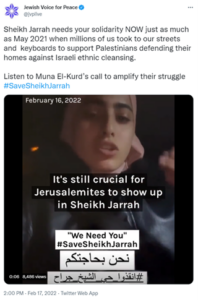 Just a couple of months ago, Jewish Voice for Peace (“JVP”) shared a video of El-Kurd calling on people to “support Palestinians defending their homes against Israeli ethnic cleansing.” Expect crickets from JVP in response to El-Kurd’s call to ethnically cleanse Jews. After all, in El-Kurd’s world, groups like JVP are, as the old descriptor goes, “useful idiots.” According to her, there is no such thing as a leftist Jew; just “settlers” and “Zionist dogs.” So much for JVP’s ideas of “joint struggle” now that El-Kurd has declared it impossible.