Bloomberg News has failed to correct two straight-forward errors in its Israel coverage. In her April 12 business story (“Israelis Rush for Gun Licenses After A Series of Fatal Shootings“), Gwen Ackerman errs about Israeli-Arabs, wrongly reporting that the population “mostly identify as Palestinian.” In fact, polling data shows that the opposite is true. They mostly don’t identify as Palestinians. A 2019 Israel Democracy Institute report found that only 13 percent of surveyed identify as Palestinian (“Jews and Arabs: Conditional Partnership“). 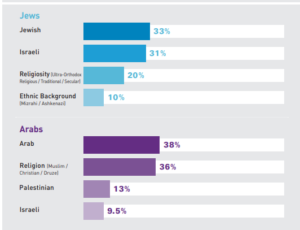 Other surveys have similar findings. For example, a 2017 study by Arik Rudnitzky and Itamar Radai found that only 8.9 percent of Israeli Arabs identify as “Palestinian in Israel/Palestinian citizen in Israel” and 15.4 percent identify as “Palestinian” (“Citizenship, Identity and Political Participation . . . ” p. 22).
A third study, conducted by Camille Fuchs of Tel Aviv University, found only 7 percent of non-Jewish people in Israel identify as Palestinian.
While CAMERA supplied this data to Bloomberg, the news outlet has yet to correct.
Second, Bloomberg incorrectly reports: “All Israelis are required to complete military service . . . .” In fact, not all Israelis are required to serve in the military. Israeli Arabs are exempt, though many do volunteer for service. Haredim are also largely exempt, with only a tiny minority drafting. Religious women are also exempt, and are eligible for National Service as opposed to military service. 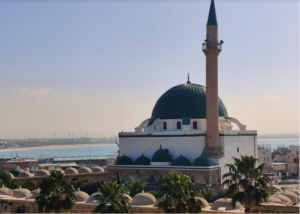 As Haaretz reported in 2019 (“Most Israelis Don’t Serve in the Army, but It’s Still The Right Solution, for Now“):

Based on the 2019 data that the military has released at the request of TheMarker, compared with the data in the report by the committee in 2005, the percentage of Jewish men being drafted has shrunk from 77% to 69%, while for women the number has fallen from 59% to 56%. …
The decline in draft rates stems from the relative increase of the ultra-Orthodox, or Haredi, community, and the failure to draft more Haredi men through the military draft law, the reason Israel is heading toward its second Knesset election this year. With a gross fertility rate of seven children per woman, the Haredim are the fastest growing community in Israel, and the Central Bureau of Statistics forecasts that their share of the population will soar from 11% in the mid-2010s to 32% by 2060. The fact that the rate of women being drafted declined more moderately is probably the result of more religious-Zionist women joining the ranks.

Haaretz‘s Meirav Arlosoroff mused that given the large number of Israelis who don’t serve, “Can the Israel Defense Forces still be called a people’s army?”
As for Bloomberg, which failed to correct this second error when CAMERA contacted editors, does the business news service still trade in the hard currency of “The Bloomberg Way,” that is, use the “factual word,” “Be accurate: there is no such thing as being first if the news is wrong,” and “Show, don’t tell: back up statements with facts, figures and anecdotes”? Or did it too fall prey to the pliability of narrative?
See also “Bloomberg Upends History to Blame Israel for Hamas Terrorism, Corrects“