In this Sunday’s New York Times, reporter Craig Smith wrote 1179 words on the so-called Sheba Farms issue, and still managed, once he got past the basics, to omit virtually every key fact.

By way of background, Sheba Farms is a 10-square-mile area of Syria which was taken by Israel in the 1967 war, and which existed in well-deserved obscurity until Israel withdrew from Lebanon in 2000, at which point Syria and its Lebanese proxy Hezbollah claimed that Sheba Farms was actually Lebanese territory, and that Israel was therefore still occupying part of Lebanon. Syria and Hezbollah made this dubious claim to justify Hezbollah’s continuing refusal to disarm (all other Lebanese militias disarmed in 1990), and to justify its continuing attacks against Israel. Smith did convey these basic facts more or less correctly in his article, Lebanon’s Three-Sided Postwar Game: Who Gets Shabaa Farms?.

The problems begin, however, when Smith treats seriously claims that resolving the Sheba Farms issue is “central” to peace efforts in the region :

Israel and many other observers say the Lebanese claim on Shabaa Farms gained traction only when Israel withdrew from southern Lebanon in 2000.

According to that view, Hezbollah, backed by Syria, has seized on the farms as a way of legitimizing what it describes as continued resistance against Israeli occupation. Whether or not that claim is legitimate, it is one of the central issues in bringing a sustainable peace to the region. “Shabaa is the key,” said Patrick Renaud, the European Union’s representative in Lebanon.

Of course, there is no guarantee that Hezbollah will disarm if the Shabaa Farms area is transferred to Lebanon.

In fact, there is no need to worry about any “guarantee” that Hezbollah will disarm. The group has made it very clear that it will keep its arms, and that its grievance is not that Israel supposedly occupies Lebanese territory, but that Israel exists at all, on any land. Thus, after Israel withdrew from Lebanon in 2000, Hezbollah leader Hassan Nasrallah stated :

We have liberated the south. Next we’ll liberate Jerusalem. (Washington Post, July 16, 2006)

And chief Hezbollah spokesman Hassan Ezzeddin stated in a 2002 interview that:

In addition, while Syria admits that it once controlled Sheba Farms, it now claims that it ceded the land to Lebanon. Despite this, Syria adamantly refuses to put in writing that Sheba Farms is part of Lebanon, mostly because to do so would amount to recognizing Lebanese sovereignty, which Syria is loathe to do since it considers Lebanon to be part of Syria. Which is also why there has never been a Syrian ambassador to Lebanon. All of which makes rather laughable Syrian claims that Sheba Farms is part of Lebanon.

Despite this, Smith gives credence to claims that Sheba Farms is Lebanese, interviewing Lebanese residents who quite dutifully recite the party line. (How could they do otherwise without incurring the wrath of Lebanon, Syria and Hezbollah?) Referring, for example, to maps showing Sheba Farms in Syria, Smith writes:

But the maps were moot as far as people on the ground were concerned. Though the French-drawn border put the Shabaa Farms in Syria, the people who owned the farms continued to pay taxes to the government of Beirut and continued to register births, deaths and other events in Lebanon.

In fact, Syria’s 1960 Census lists the farms as being in Syria, and counts the residents as Syrians: 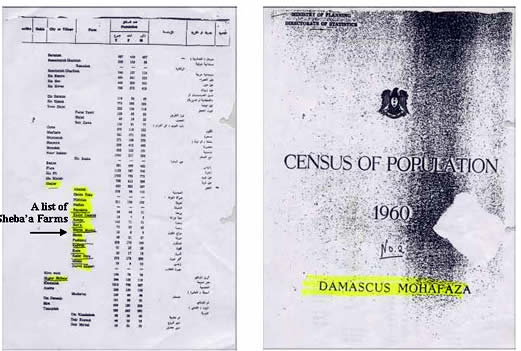 (Image of census pages from Center for Special Studies backgrounder by Dr. Reuven Erlich, which has a wealth of further details and evidence on Sheba Farms.)

Only by ignoring such critical evidence is Smith able to take seriously claims that Sheba Farms is a legitimate issue, and that it is “central” to peace in the region. Too bad for Times readers that Smith omitted all this.

Smith also omits other key information, such as that Hezbollah has cited further land besides Sheba as being supposedly occupied by Israel. There are for example the so-called “seven villages,” formerly Shiite villages on land which was originally part of the French Mandate of Lebanon and Syria. Under agreements between the Mandatory powers, that land was later swapped to the British Mandate of Palestine, and became part of Israel after 1948. Hezbollah has demanded that the land be “returned” to Lebanon, and there is little doubt that were Israel to give up control of Sheba Farms to Lebanon, the “seven villages” would become Hezbollah’s new rallying cry.

Mr. Smith and his editors at the New York Times should realize that getting the facts straight is really what is “central” to “sustainable peace in the region,” and that giving legitimacy to bogus claims by Hezbollah and Syria will only embolden those whose greatest fear is peace.