In response to communication from CAMERA, The New York Post has removed the erroneous reference to the Gan Yavne highway's location as "near Israel-Gaza border." See below for a detailed update.

A stunning video yesterday captured a rocket, launched by the Palestinian Islamic Jihad terror organization, slamming into a highway in central Israel, narrowly missing two cars which emerged from the conflagration and kept driving.

The location was Gan Yavne, which a New York Post video headline erroneously described as "near Israel-Gaza border" ("Tensions rise after rocket explosion near Israel-Gaza border"). In fact, Gan Yavne is deep into Israel, in the southern part of central Israel, adjacent to Ashdod, not near the border. In fact, it is located slightly closer to Tel Aviv (40 kilometers) than it is to the Gaza Strip (45 kilometers), and is as far north as Jerusalem. 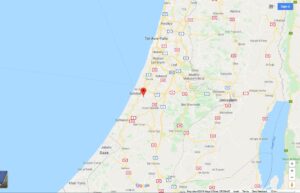 Gan Yavne is indicated by the red marker (Google Maps)

CAMERA has contacted The New York Post to request a correction. Stay tuned for an update.

In response to communication from CAMERA, on Nov. 14 editors commendably amended the title of the video. It now accurately reads: "Tensions rise after rocket explosion on Israeli highway."