With the insertion of just three words, Agence France Presse manages to completely distort the very nature of Palestinian Islamic Jihad rocket attacks against Israeli civilians and the Israeli army’s air strikes targeting  terrorists and their weaponry. In the last two days, Islamic Jihad, a designated terror organization, has fired over 350 rockets at Israeli cities, towns, and villages, while Israel has responded with targeted air strikes against Islamic Jihad. Numerous AFP articles and captions today refer to the violent exchange as “tit-for-tat,” language which denotes equivalency.
Today’s article (“Death toll shoots up as Israel-Gaza violence rages for second day“), for example, states: 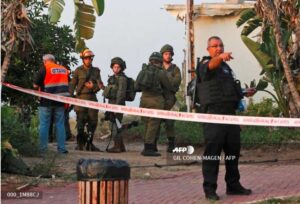 Israeli soldiers stand guard next to a house hit by a rocket in the southern Israeli city of Ashkelon on November 13, 2019, during a wave of tit-for-tat rocket salvoes and air strike between Israel and a Palestinian militant group. Two Palestinians were killed in Israeli air and missile strikes on Gaza early, the territory’s health ministry said, taking the death toll from a two-day flare-up to 12. GIL COHEN-MAGEN / AFP 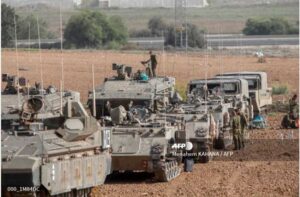 But there is nothing equivalent about Islamic Jihad’s war crimes – the deliberate targeting of civilians – versus the Israeli military response: the targeting of Islamic Jihad terrorists and their weapons, and careful efforts to make the strikes surgical in order to avoid civilian casualties.