Thus, in the Nov. 12 article (“Rockets Rain on Gaza and Israel After Airstrike Kills Militant Leader“), Colin Dwyer misreports the Israeli operation to kill Islamic Jihad commander Baha Abu Al-Ata, which had sparked the Palestinian rocket attacks, incorrectly reporting that several bystanders were killed in that attack. In fact, they were killed in subsequent Israeli air strikes targeting Islamic Jihad cells setting up rockets to launch; they were not bystanders.

The prime minister noted that he and Israeli military and intelligence leaders approved the operation 10 days ago and that they waited for a “unique window of opportunity to carry out the action, under optimal conditions with maximum chance of success and minimal chance for hitting anyone uninvolved.”

Still, the Palestinian news agency WAFA reports that the attack killed not only Abu el-Atta and his wife but also at least three other Palestinians. At least 45 other people in Gaza reportedly were injured, according to Gaza health officials, and at least 19 people in Israel were injured in the retaliation.

While Abu Al-Ata’s wife was indeed killed during the air strike which targeted her husband, their were no additional fatalities. Other Islamic Jihad fighters where killed in subsequent Israeli attacks against Islamic Jihad cells preparing rockets to launch, as described above.
As The New York Times reported:

Israel refrained for several hours from additional strikes, saying it wanted to avoid an escalation, though it struck what it said were two Islamic Jihad operatives preparing to launch a rocket around 11 a.m.

On Tuesday, Israel went after the group, with Prime Minister Benjamin Netanyahu announcing that the Israeli air force had killed “arch-terrorist” Bahaa abu Atta, 42, the Palestinian Islamic Jihad commander, in a daybreak surgical strike in which his wife, Asma, also died. Islamic Jihad retaliated with nearly 200 missiles fired into Israel, which struck back with air sorties that left eight people dead in Gaza, authorities there said.

With a caption that cut out critical information, NPR conceals that a specific fatality was an Islamic Jihad member reportedly preparing to launch rockets: 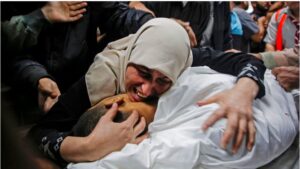 A mother mourns her 25-year-old Palestinian son Tuesday in Beit Lahia, in the northern Gaza Strip. Israel said it had carried out an airstrike in the area amid an escalation of violence between Israeli troops and Palestinian militants. Anas Baba/AFP via Getty Images

The mother of Palestinian Zaki Ghanama, 25, mourns over his body at the morgue of a hospital in Beit Lahia in the northern Gaza Strip on November 12, 2019, following an Israeli strike. Israel said it had carried out an air strike against militants preparing to launch rockets. The incident took place amid an escalation in violence between the two sides that followed an Israeli strike that killed an Islamic Jihad commander in the Gaza Strip. (Emphasis added.)

The bolded sentence noting that Israel said it carried out an air strike against fighters preparing to launch rockets does not appear in NPR’s caption. 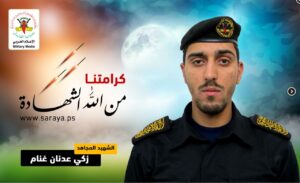 Moreover, it is confirmed that Ghanama is a member of Palestinian Islamic Jihad; the terror group released a poster (at left) claiming him as their own following his death.

NPR further obscures that Israel specifically targeted Islamic Jihad with the imprecise headline: “Rockets Rain on Gaza and Israel After Airstrike Kills Militant Leader.” “Rockets rain on Gaza and Israel” suggests an equivalency where none exists. On one side, a Palestinian terror organization was carrying out a war crime by indiscriminately firing on communities, targeting civilians. On the other side, Israel’s military carefully targeted Islamic Jihad terror targets, making every effort to leave civilians along with Hamas – the larger terror organization which rules the territory – out of the violence.