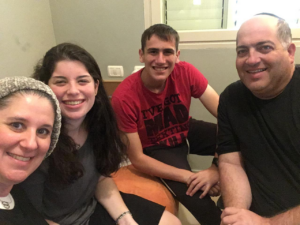 Modiin residents take cover in their bomb shelter at home as the Iron Dome intercepts a rocket overhead, Nov. 12, 2019 (Photo by Aviva Zacks)

CAMERA’s Israel office prompted correction of a Reuters article today which greatly understated the number of Israelis forced to flee to bomb shelters due to the hundreds of Palestinian Islamic Jihad rocket attacks which targeted southern and central Israel Tuesday and Wednesday this week. Today’s article, “Tenuous truce in Gaza as Islamic Jihad, Israel differ on terms,” had erred:

Hundreds of rocket launched by militants had paralyzed much of southern Israel and reached as far north as Tel Aviv, sending thousands of people to shelters. (Emphasis added.)

This figure is grossly understated. Although precise figures are not available, easily at least one million Israelis were forced to find shelter from Islamic Jihad rocket attacks. According to Israel’s Central Bureau of Statistics, 1.4 million people live in the Tel Aviv district, another 1.3 million people live in Israel’s southern district (including Ashkelon and Beersheva, along with the many smaller locations), and over 2 million people live in the central district, which includes Rehovot and Modiin, among other cities and communities where residents had to run for shelter. Rockets targeted all of these areas, and the sirens therefore went off in all of these locations, sending its residents to shelters.
In response to communication from CAMERA, Reuters amended the article, removing the reference to a specific number and changed the wording to accurately refer to hundreds of rockets “sending entire communities to shelters.”
Contrary to common journalistic practice, Reuters did not append a note alerting readers to the correction.