Last week, the New York Times claimed – wrongly – that there had been a “longstanding American policy treating the settlements as illegal,” which remained in place until Secretary of State Pompeo announced a reversal in 2019.

Although the newspaper is aware of the error, it has refused to correct, and refuses even to put forward a defense for its claim.

To be fair, the Times isn’t the first to make this mistake. In October 2016, the Washington Post corrected its claim that the US regarded settlements as illegal. A month later, the Associated Press corrected. The following month, The Times (UK) corrected, as did ABC News and the Times of Israel. In 2018, the Times of Israel corrected again. The Financial Times corrected in November 2019. And two days the Economist ran a correction of its own.

Even the New York Times itself has corrected the false claim. After a March 2017 editorial asserted that the United States “has consistently held that settlement building in the occupied territories is illegal,” a correction clarified,

An earlier version of this editorial incorrectly stated the United States’ position on settlement building in the occupied territories. It has been highly critical of the activity, but has not consistent held it to be illegal.

From the news side, an Aug. 8, 2013 correction in the Times likewise acknowledged that “the United States has taken no formal position in the last several years on whether [settlements] are legal or illegal.” 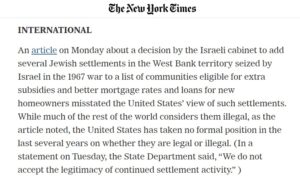 Unless those corrections were themselves in error, last week’s claim that there has been a “longstanding” policy holding settlements to be illegal (and a similar claim last November by the same reporter, David Halbfinger) can’t be true. And the corrections were indeed correct.

Roughly 40 years ago, the Carter administration did hold the position that settlements were illegal. The president, sharing the opinion of State Department legal advisor Herbert Hansell, described Israeli building in the West Bank as a violation of the Geneva Convention.

But the subsequent president changed course.

As Ronald Reagan told the New York Times in 1981, his view was that settlements are “not illegal”:

As to the West Bank, I believe the settlements there — I disagreed when the previous Administration referred to them as illegal, they’re not illegal. (Feb. 3, 1981)

Likewise, in a 1983 interview with the Sunday Times (London), Reagan repeated that “there certainly is no illegality to the building.”

And again in 1984, Reagan said during a press conference that “I had never referred to them as illegal, as some did.”

New York Times reporters covering the Reagan administration had no doubts about the president’s views. On Feb. 6, 1981, a front-page story in the Times explained that “The President, speaking with five reporters, said that he stood by his campaign statement that the Carter Administration was wrong in describing Israeli settlements in occupied territory as illegal.”

On Feb. 19, 1981, the paper reported that “President Reagan, while reversing former President Carter’s assertion that the settlements are illegal under international law, has called them ill-advised and unnecessarily provocative.”

His Secretary of State, George Shultz, is cited in the New York Times, under the heading “Reagan’s View on Settlements,” reiterating that the President did not view settlements as illegal:

As to the continued Israeli settlements on the West Bank, Mr. Shultz said on Friday at his news conference that President Reagan, while believing they were not illegal, had told him recently that expansion of the settlements was ”not a constructive move.” He said then and again today that he agreed with Mr. Reagan. (Aug. 23, 1982)

A month earlier, the Miami Herald likewise reported on a press conference in which “Shultz accepted President Reagan’s view that Israel’s West Bank settlements are not illegal.”

Charles Lichenstein, Reagan’s representative at the UN Security Council, explained that a UN resolution’s claim that settlement policy had no legal standing was “a view inconsistent with that of the United States” (New York Times, Aug. 3, 1983). 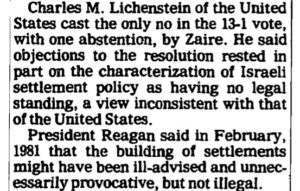 On Aug. 15, 1984, the Times reported that “The United States and Israel objected to [an] assertion that the ‘establishment of settlements in territories occupied by force is illegal and condemned by the international community.’”

These views continued after Reagan left office. In 1991, George H.W. Bush’s secretary of state James Baker stated during a press conference that “In the past, the position of the United States has been that it was, in fact, illegal.” When in direct and immediate response he was asked “But that‘s not this administration?,” Baker flatly replied: “That is not our policy. No.” 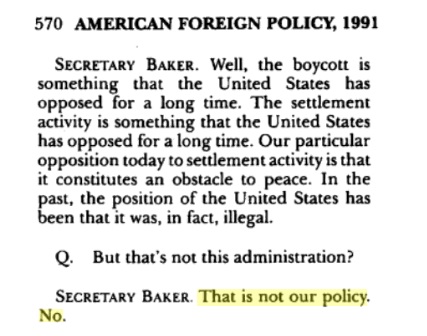 Subsequent administrations, while continuing to oppose settlements, did not revert to Carter’s position, even if they fell short of Reagan’s. So, for example, State Department Deputy Spokesman James Brendan Foley said during a 1997 press conference, “Our position on – overall position on the question of the legality of settlements remains the same.  We’re, of course, not taking a legal position on that overall issue.”

In 2004, State Department spokesman Richard Boucher said in response to a question at a press conference that “This administration has not taken an issue [sic] on the legality of them.  We’ve taken a position that emphasizes the need to end settlement activity in order to make progress towards a two-state solution and the need to deal with the question of settlements in the final status negotiations.” When the questioner responded, “So it’s fair to say – it’s accurate to say that both before and after Sharon’s visit, the United States officially did not take a position on the legality under the Geneva Convention of those settlements?” Boucher replied, “That’s right.” (You can view the exchange beginning at minute 44:00 in the video below.)

Other publications understood that the administration’s view on settlements under Carter didn’t outlast his time in office. In a 1983 edition of Foreign Affairs magazine, Seymour Maxwell Finger, who was described in a New York Times obituary as “a recognized authority on foreign affairs,” referenced “the Reagan position” that settlements are “not illegal.”

In a 1985 edition of Foreign Affairs magazine, Charles W. Maynes, who was an assistant secretary of state under Carter and later an editor of Foreign Policy magazine, wrote about Reagan’s “administration positions toward such sensitive issues as the legality of Israeli settlements on the West Bank,” and in parentheses immediately clarified for readers what that position was: “they are ‘not illegal.’”

Anti-Israel academics, too, were forthright about the change in policy after the Carter administration. Writing for the Middle East Research and Information Project, Joel Beinin in 1985 noted that “in early 1981 Ronald Reagan went a step further by declaring that Israeli settlements on the West Bank were ‘not illegal,’ reversing the official US stand since 1967.” And in 1990 Walid Khalidi wrote in the Journal of Palestine Studies that U.S. policy “has, since the beginning of the Reagan administration, considered [settlements] ‘not illegal.’”

It wasn’t until the closing days of the Obama administration that the U.S. announced it was circling back to Carter’s view. In a December 28, 2016 speech, Secretary of State John Kerry stated that the U.S. was again adopting the legal opinion put forth in 1978 by Herbert Hansell, the Carter administration legal advisor, that settlements are “inconsistent with international law.”