The United Nations (“UN”) has a long history of inventing or redefining terminology to single out, demonize, and delegitimize the Jewish state. Over the years, for example, the UN has invented a separate meaning of the term “refugee” when it comes to Palestinians and declared that “Zionism” actually meant “racism.” More recently, some UN officials have attempted to redefine the Jewish right to self-determination as “apartheid.”

In the coming days, the UN is set to continue the trend at the Human Rights Council (“UNHRC”) by declaring that Israel’s control of Judea and Samaria is not “military occupation,” but rather a legally meaningless descriptor of “colonial occupation.”

Such language denies Jews their history by labeling them as foreign invaders serving foreign powers, as opposed to being indigenous to the Land of Israel. It depicts Jews in Judea as no different from British colonial authorities in places like Nigeria or Singapore.

This new attempt can be found in a “zero draft” of an upcoming UN resolution (i.e., an early draft that is still in the negotiation and revision stage), which contains a paragraph that, as of the morning of March 21, reads:

“PP11. Considering that the right to self-determination of the Palestinian people is being violated further by Israel through the existence and ongoing expansion of settlements in the Occupied Palestinian Territory, including East Jerusalem, which have served to transform a military occupation into a colonial occupation, and reinforced through a system of oppression and domination;” (Italics added; strikethrough in original)

The draft is sponsored by Pakistan on behalf of the 56-member Organization of Islamic Cooperation (“OIC”).

It is worth pointing out that the strikethrough text (indicating the language will probably be removed in the final version sent to a vote) would have sought to bolster efforts to declare Israel an “apartheid” state.

Having apparently faced enough resistance to such absurd language, the sponsors instead seem to have fallen back on their go-to strategy of trying to disconnect Jews from the Jewish homeland.

The phrase “military occupation,” also referred to as “belligerent occupation,” refers to the situation regulated under international law, such as in Geneva Convention IV, when one state coercively occupies the territory of another state. While Israel believes that Judea and Samaria are disputed territories, as opposed to occupied territories, it voluntarily applies the humanitarian aspects of Geneva Convention IV pending a final peace deal.

“Colonial occupation,” on the other hand, is not a legal concept. Nor is it even much of a common political concept. A search of UN records shows that other than a few UN resolutions referencing South Africa’s control of Namibian territory, the phrase “colonial occupation” has largely (if not exclusively) been employed only in statements by the Palestinians (and occasionally the Syrians).

The draft’s surrounding language, suggesting a military occupation is ending and being replaced with a “colonial occupation,” is similarly nonsense. Such an understanding would upend international law. A military occupation cannot simply end with “any change introduced, as the result of the occupation of a territory, into the institutions or government of the said territory, nor by any agreement concluded between the authorities of the occupied territories and the Occupying Power, nor by any annexation…”

Rather, as detailed by the legal scholar Eyal Benvenisti:

“[O]ccupation can end in a number of ways: with the loss of effective control, namely when the occupant is no longer capable of exercising its authority; through the genuine consent of the sovereign (the ousted government or an indigenous one) by the signing of a peace agreement; or by transferring authority to an indigenous government endorsed by the occupied population through referendum and which has received international recognition.” 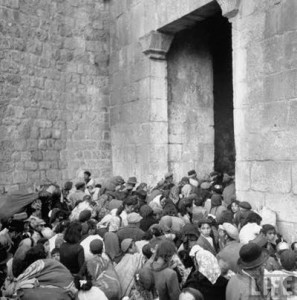 Jewish residents of the Old City in Jerusalem evacuating during the 1947-1949 war.

Consider, for example, the specific reference to East Jerusalem. The language employed in the paragraph by the OIC would depict the presence of Jews in eastern Jerusalem as “colonialism,” notwithstanding that Jews have maintained a presence there for millennia. It would label Jews living in the Jewish Quarter of the Old City as “colonial occupiers.” The same would be applied to the Jews of Hebron, where the Jewish people have maintained a presence for thousands of years, with only a brief three-decade absence following their ethnic cleansing from the city in 1936.

By labeling Israel as a “colonial occupier,” the Palestinians and their enablers at the UNHRC are using the same antisemitic strategy they frequently employ at UNESCO to delink Jews from their indigenous homeland and their holy sites. As the U.S. Commission on International Religious Freedom wrote in 2018 regarding two such UNESCO resolutions: “The idea that there’s a question about the Jewish historical presence in the Holy Land and specifically at these sites is unacceptable and diminishes the religious rights of the Jewish people.”

The European Union, which has historically acquiesced to the antisemitic efforts at UNESCO to deny Jews their history and their religious rights, has indicated in the past it would stop supporting such efforts. As the UNHRC heads toward a vote on these draft resolutions next week, the world will see if European countries stand by their purported principles.