July 15 Update: Reuters Clarifies Gaza Blockade Graphic, Adds Egypt
Numerous news outlets have marked one year since the beginning of last summer’s war between Israel and Hamas with reports on the slow civilian rebuilding efforts and on the humanitarian conditions of the Gaza Strip. Reuters was among them, and unfortunately misled with a recent graphic about the blockade as well as with photo captions and articles concerning rebuilding efforts. Following communication with CAMERA, editors agreed with criticism about a graphic on the blockade.
Whose Blockade? Whose Crossing?
The July 10 Reuters graphic (below) titled “Gaza blockade” includes text which refers only to Israel’s blockade while ignoring the more restrictive Egyptian blockade. The text reads:

Israel has blockaded Gaza, placing restrictions on people and goods leaving the enclave and goods entering it, since the Islamist group Hamas won power in Gaza in election in 2006. The blockade has isolated Gaza from the rest of the world. 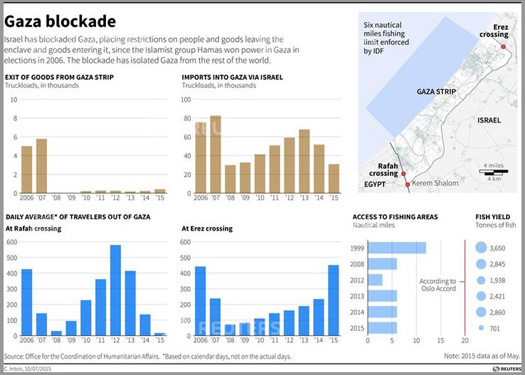 Then, inexplicably, the graphic includes a chart showing activity at Rafah crossing, despite the fact that the crossing is controlled by Egypt. By including Rafah under a text that notes only the Israeli blockade, Reuters gives news consumers the false impression that Israel controls Rafah as well.
But the figures for passage through Rafah are so low because Egypt has maintained a strict blockade of its own, one that has been exceedingly more restrictive than Israel’s and which has prohibited virtually all passage of people and goods for most of the last several months. Yet the Reuters graphic about “Gaza’s blockade” completely ignores the Egyptian blockade.
Indeed, while the graphic focuses singularly on the “Israeli blockade,” the data shows that over 400 people cross through Erez to Israel every day, while an average of approximately just 10 people cross on a daily basis through Rafah to Egypt. (Most days this year, not a single person crossed through Rafah into Egypt.) But readers cannot draw the proper conclusions given that the item since the graphic never mentions Egypt. Why the unjustified, inappropriate singular focus on the Israeli blockade?
CAMERA’s Israel office posed this question to Reuters editors, who agreed with these concerns, and agreed to raise the issue with the bureau that produced the graphic. Stay tuned for news of any updates.
No Homes Rebuilt?
On a separate but not totally unrelated issue, several Reuters news captions and at least one news story last week stated that “none” of the more than 100,000 “damaged or destroyed” buildings in Gaza have been rebuilt. For instance, the caption for the photograph below states:

Palestinians [sic] Hamas militants march during an anti-Israel rally in Gaza City, July 9, 2015. July 8th marke the one-year anniversary of the war between Israel and Hamas in Gaza. The 50-day conflict began after Israel said it was determined to put an end to constant rocket-fire from Gaza, launching an intense air and ground assault to do so. It was the third major conflict between Israel and Hamas militants since the Islamist group seized control of Gaza in 2007. The fighting killed more than 2,100 Palestinians, most of them civilians, as well as 73 Israelis, most of them soldiers. More than 100,000 buildings in Gaza were left damaged or destroyed. None has yet been rebuilt.

In fact, 90,000 partially-damaged homes have been rebuilt, the Palestinian housing minister told journalists last month. Likewise, the UN’s Office for the Coordination of Humanitarian Affairs reported: “With regard to permanent solutions, of the 144,200 housing units requiring repair, 73,500 units still require attention. Of the 12,600 houses that were totally destroyed, not one has yet been reconstructed.” Thus, while none of the completely destroyed homes have been reconstruction,  70,700 damaged, or partially-destroyed, homes have already been repaired.
Preparations For Next Battle, Unreported
While numerous Western media outlets have weighed on the civilian reconstruction efforts, they have exhibited less interest in Hamas’ reconstruction of its arsenals and infrastructure. Reporting on a press conference held in Gaza Friday by “several military wings of Palestinian factions,” the Palestinian Maan News Agency stated:

At the conference, the spokesperson for the many factions referred to Israel’s failure to follow through on promises to ease the blockade of the Gaza Strip as well as neglecting to allow materials into the strip for reconstruction.
The spokesperson said resistance actions had, “re
stored [Gaza’s] military capabilities, and have gone through a lot of preparation for the next battle.”
He added that resistance factions are now better prepared than they were prior to the last year’s Gaza war.

Journalists who have paid close attention to the Gaza Strip’s stunted civilian redevelopment might want to ask the Hamas authorities the following questions: If Israel has failed to ease the blockade, how has Hamas managed to restore its capabilities, and even surpass its pre-war level of readiness for battle? If Hamas is charging forward with its rebuilding of tunnels, rockets and other infrastructure, why has the civilian sector, for which it is responsible, lagged so far behind? Are the two — progress on Hamas’ war capabilities versus stagnation on the civilian front — related?
Donate Now