Palestinian Holocaust distortion is more widespread than the public might imagine. It is antisemitic at its core and is an obstacle to peace.

Palestinian Authority President Mahmoud Abbas continues to bypass direct negotiations with Israel by trying to garner international support for a Palestinian state on disputed territory.   On August 16, 2022, the Palestinian leader visited Berlin to seek support for a unilateral declaration of Palestinian statehood from German Chancellor Olaf Scholz. There, Abbas publicly attacked Israel as an apartheid state and reverted to his Holocaust revisionist roots as he accused the Jewish state of perpetrating “Holocausts.” At a joint news conference with the chancellor, he refused to apologize for the massacre of Israeli athletes at the 1972 Munich Olympics  perpetrated by terrorists affiliated with his Fatah party. Instead, he declared:

“From 1947 to the present day, Israel has committed 50 massacres in Palestinian villages and cities — 50 massacres, 50 Holocausts, and until today, and every day there are casualties killed by the Israeli military.” 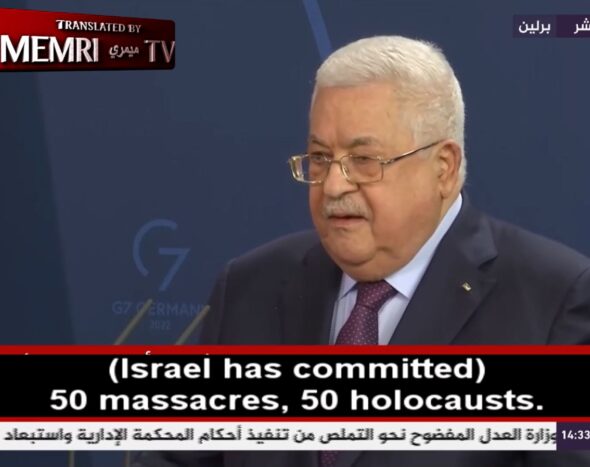 The IHRA definition of anti-Semitism, adopted by more than 30 countries, as well as the U.S. State Department, includes “drawing comparisons of contemporary Israeli policy to that of the Nazis.”  The Palestinian leader’s Holocaust comparison was, thus, an overt example of antisemitism. And it backfired, creating a diplomatic furor.  Not only did Israel’s leaders vociferously object to Abbas’ Holocaust distortion, but Chancellor Scholz did not accede to recognizing a Palestinian state at this point. The German Chancellor vehemently objected to Abbas’ words. In the German newspaper Bild and on twitter he stated:

“I am disgusted by the outrageous remarks made by Palestinian President Mahmoud Abbas. For us Germans in particular, any relativization of the singularity of the Holocaust is intolerable and unacceptable. I condemn any attempt to deny the crimes of the Holocaust.”

Abbas subsequently tried to walk back his remarks by issuing a statement that “reaffirm[ed] that the Holocaust is the most heinous crime in modern human history” and that he hadn’t intended to “deny the singularity of the Holocaust.”

But this does not alter his basic, antisemitic lie—from which he has not veered for four decades—that Jews were complicit in the Nazi Holocaust and continue to be perpetrators of similar Holocausts today.  Abbas’ brand of Holocaust distortion acknowledges – whenever politically expedient— that the Holocaust was a singular crime.  His distortions lie in the accusation that Zionist Jews collaborated with Nazis, sacrificing other Jews for their own nefarious purposes, and continuing the same practices against the Palestinians. Holocaust distortion for Abbas is a vehicle with which to demonize those who support a Jewish state in the Jewish ancestral homeland.  And he indulges in it regularly.

His 1982 doctoral thesis focused on a purported “Secret Relationship Between Nazism and Zionism” where Zionists were depicted as the Nazis’ “basic partner in crime,” collaborating with them to fuel hatred against the Jews and “expand the mass extermination” — all in order to drive mass Jewish emigration to Palestine. A subsequent book by Abbas based on his dissertation was entitled The Other Face: The Connection Between the Nazis and the Leaders of the Zionist Movement.  Its main theme, as in the thesis, was the distortion of a transfer agreement to allow and facilitate the emigration of increasingly victimized German Jews to Palestine in the early years of the Nazi regime. The controversial economic agreement between the German Economics Ministry and two Zionist organizations — the Jewish Agency for Palestine and  the German Zionist Federation — was distorted by Abbas into  a wholesale Zionist collaboration with the Nazis in the annihilation of European Jews. The theme has become a popular canard among Arab antisemites who vilify Jews and Zionists as Nazis and accuse them of the crimes of the Holocaust.

In the same book, Abbas indulged in other types of Holocaust revisionism, as well.  He cited the claims of Holocaust deniers, including the notorious Robert Faurisson who argues against the existence of gas chambers to murder Jews, and others who argue that the number of Jews who were murdered during the Holocaust was grossly exaggerated. Abbas himself lent support to the revisionist claims, declaring:

“It seems that the Zionist movement’s stake in inflating the number of murdered in the war was aimed at [ensuring] great gains. This led it to confirm the number [6 million], to establish it in world opinion, and by doing so to arouse more pangs of conscience and sympathy for Zionism in general. Many scholars have debated the question of the 6 million figure, and reached perplexing conclusions, according to which the Jewish victims total hundreds of thousands…In effect, the true number is much smaller than these fictitious millions.”

In a 2013 interview on Lebanon’s Al Mayadeen TV, Abbas reiterated the same antisemitic charge of a Zionist-Nazi collaboration.  He declared:

“I challenge anyone to deny the relationship between Zionism and Nazism before World War II” and boasted that there were “70 more books that I still haven’t published” about this.

In a televised speech to the Palestinian National Committee in April 2018, Abbas claimed that “hatred toward Jews” in Europe from the 11th century through the Holocaust was “not because of their religion, but because of their function in society, which had to do with usury, banks, and so on…” (in other words he blamed antisemitism and its resultant pogroms, massacres and Holocaust on its Jewish victims.)  In the same speech, Abbas invoked Hitler and the Nazis, portraying them as sponsors of Zionism.  Dismissing the centrality of Zion to the Jewish faith, he asserted, “We’re tired of hearing” the same “narrative about [Jews] coming to this country [Israel] because of their longing for Zion, or whatever.The truth is that this is a colonialist enterprise, aimed at planting a foreign body in this region.”

It is not only the elderly Palestinian leader who engages in antisemitic rhetoric and Holocaust distortion. In 2018, Palestinian Authority TV broadcast a documentary on PA President Abbas to bolster and praise the Holocaust revisionism  of his doctoral thesis, claiming he had “exposed the relations between the global Zionist organization and the Nazi regime.”

In contrast to the widespread condemnation from Germany and the West of Abbas’ recent Holocaust distortion in Germany, support for Abbas was staunch and uniform across the Palestinian sphere.  Prominent commentators and politicians took to the media to condemn the criticism of Abbas, blaming it on a racist propaganda campaign by Israel and to defend Abbas’ statements. Many used the opportunity to justify and repeat Abbas’ Holocaust revisionism. Below are just a few of the many examples of how Holocaust distortion was bolstered in the Palestinian community.

In a statement carried by the Palestinian wire service Ma’an, PA Deputy Prime Minister and spokesman Nabil Abu Rudeineh summed up the support for Abbas across the Palestinian sphere. He said Abbas’ words in Germany “united everyone behind this clear position towards the continuing crimes of the Israeli occupation against our people.” He justified Abbas’ use of the “Holocaust” to describe Israel’s actions, saying it “clearly expressed to the whole world the truth about the massacres, crimes and killings that our Palestinian people are being subjected to.” (August 25, 2022)

Similar support for Abbas’ Holocaust analogy by other Palestinian politicians was previously published in Ma’an.  In the August 17th edition of the news serice, a representative of the PA President in Europe, Mahmoud Ayyash, called Abbas’ Holocaust analogy “the embodiment of truth,” as did PLO Executive Committee Member Bassam Al-Salhi, who asserted that this was the position of all Palestinians.   The same view was also promoted by Palestinian National Council member Muhammad Ayyash, who stated that “Abbas’ statements in Germany are the truth… there is no vagueness in them, and … they reflect [the position of] all the Palestinians.”

“Israel and the West have for days been intentionally attacking Abu Mazen for using the term ‘Holocaust’ to describe Israel’s crimes. They deny the Zionist movement’s crimes that are not any less ugly than the Nazi crimes that we naturally denounce. Furthermore, Israel and the West turn a blind eye to the Zionist movement’s conspiracy woven together with the Nazis to force poor Jews to immigrate and settle in Palestine.” (Aug. 22, 2022)

The newspaper’s editorial on August 22 similarly supported Abbas’ comments saying that he is “not afraid to tell the truth” and claiming that criticism of his Holocaust comments was the result of a “frantic Zionist racist incitement campaign.”

Talal Awkal, the political analyst for Al Ayyam, the second largest Palestinian daily newspaper, decried those who criticized Abbas’ comments, accusing them of “hypocrisy.”  He accused Israel of orchestrating a pressure campaign on Germany to protest Abbas’ comments:

… Germany’s conduct gives Israel the green light to commit more crimes against the Palestinian people and multiplies the barriers preventing their prosecution, for it is not only the U.S. and the UK that undertake to protect Israel from prosecution, but Germany as well…”

As part of his attack on Abbas’ critics, Awkal alluded to and bolstered Abbas’ underlying Holocaust distortion about the transfer agreement of the 1930’s:

“The Palestinians bear no fault for German feelings of guilt about the Holocaust, but the Germans have once again succumbed to extortion from Israel after a history of extortion operations that have extracted billions of dollars from Germany and continue to do so…” (Aug. 22, 2022)

PA Culture Minister Atef Abu Saif wrote a column in the same edition of the newspaper defending what Abbas had said in Germany as truth. “The world needs to remove the band covering its eyes to see this truth,” he said.  He also commented to  Sawa News Agency  that same day asserting that “Palestinians are victims of the Holocaust” because the Jewish victims are now the victimizers of Palestinians. This is not a new claim for the culture minister.  In 2014, he declared on PA TV that   “Israel  surpassed Hitler’s massacres. By calling Israel Nazi, sadist and fascist for its [military response to rocketing from Gaza], we are letting [Israel] off lightly.”

“The world must understand the extent of suffering  the Palestinian people have lived and experienced, and that President Mahmoud Abbas bears the concerns of our people wherever he goes. He is not reticent about explaining the suffering of our people. It is clear that the Israeli propaganda machine did not like the president’s clarity and his explanation of what happened to our people, so it launched this ferocious media war against it, which we condemn and denounce. We salute our people’s stand against this attack.” (Aug. 22, 2022)

“The Zionist machine of propaganda, slander and lies – the ‘Holocaust industry’ – wants the world to ignore the Palestinian holocaust, namely the massacres perpetrated against the Palestinians, which number over 50, as Abu Mazen [aka Mahmoud Abbas] pointed out… Brother Abu Mazen was right. There is only one kind of murder and one kind of blood. .. Massacres and holocausts are the same everywhere, regardless of which nationality they are directed against. The extremist Zionist voices that have become addicted to blackmailing the world are the result of an ideology of racist and religious discrimination.” (Translated by MEMRI, Aug. 17, 2022)

Palestinian social media posts by Palestinian journalists and politicians directly and clearly supported Abbas’ controversial statements in Germany. For additional examples of how extensive  is the support for Holocaust distortion in Palestinian society, see here, here, and here.

While the media, for the most part, covered Abbas’ contentious comparison of Israeli military actions to the Holocaust, it still fails to make clear that this antisemitic position is promoted and has taken hold within Palestinian society.  It is the type of anti-Jewish incitement and sentiment that continues to thwart a peaceful solution to the Arab-Israeli conflict.