In response to communication from CAMERA's Israel office, AFP corrected its article so that it now says the rocket "caused major damage to the family home." See below for a detailed update.

At 3:40 a.m. this morning, a home in Beersheva was destroyed and later deemed uninhabitable when it suffered a direct hit from an Palestinian rocket attack. At the sound of the alarm, the mother raced her three children to the home's reinforced room, which was what saved them. Instead of reporting that a home in a major Israeli city was destroyed when it took a direct hit from a rocket attack launched from the Gaza Strip, the Agence France Presse falsely reported that a Palestinian rocket attack "caused damage to the garden of a family home" ("Israel pounds Gaza after first rocket fire in weeks").

Indeed, at no point does the article state that an Israeli house was actually hit in the Palestinian rocket fire, a major escalation in recent violence. Only in the fifth paragraph does the news agency mention the hit on the property, falsely depicting it as affecting only the garden:

Gaza militants fired two rockets before dawn, one of which caused damage to the garden of a family home in the southern city of Beersheva, some 40 kilometers (25 miles) away, the Israeli army said.

The family of three children escaped injury but were treated for shock at the scene, the Israeli army said.

AFP's own photos demonstrate that the home was destroyed, and the accompanying caption makes clear that a house "was hit." 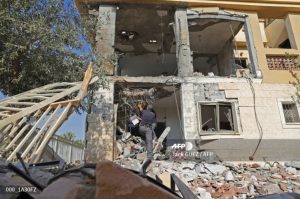 An Israeli sapper checks a house after it was hit by a rocket fired from the Hamas-run Palestinian Gaza Strip, one of the first projectiles fired in recent weeks from Gaza, on the central Israeli city of Bersheva on October 17, 2018. Israel launched raids against targets in the Gaza strip today in response to rocket fire from the Palestinian territory that caused damage in a southern city, the Israeli army said. Jack GUEZ / AFP

The article's headline ("Israel pounds Gaza after first rocket fire in weeks"), not only ignores that a home was hit, but also reports events in reverse chronological order. First, it cites the Israeli response in the active voice ("Israel pounds Gaza"), and second, mentions the "rocket fire" which precipitated the Israeli response. The headline leaves out the (Palestinian) perpetrators.

In contrast, other wire services accurately reported events in both their headlines and their stories. The Associated Press headline noted that an Israeli home was hit, and provides accurate details in the very first paragraphs ("Gaza rocket hits home in Israel, military strikes back"):

A rocket fired from Gaza struck a residential home in southern Israel early Wednesday and the Israeli miltiary began attacking militants sites in Gaza in response after days of rising tensions.

The Magen David Adom medical service said a woman and her three children, whose home in Beersheba was struck, were being treated for shock after they fled to their shelter upon being awoken by warning sirens shortly before 4 a.m. Her swift response likely saved their lives, as the home was destroyed and debris was scattered throughout the street, damaging parked and adjacent structures.

A rocket fired by Palestinian militants hit a house in the largest city in southern Israel on Wednesday, Israel’s military said, prompting Israeli air strikes that medics said killed at least one person in the Gaza Strip. …

The rocket severely damaged the house in Beersheba before dawn, the military said. The family living there managed to take shelter in a reinforced room after alert sirens sounded, said officials in the city about 40 km (25 miles) from the Gaza Strip.

CAMERA's Israel office has contacted AFP to request correction of the erroneous reference to "damage to the garden" and to urge that report open with the fact that the house suffered a direct hit and was destroyed, a significant escalation in the severity of hostilities. Stay tuned for an update.

Following CAMERA communication from CAMERA's Israel office, AFP editors commendably amended the article, which now accurately reports on the damage to the home and includes details about the family's flight to safety. The amended text states:

Gaza militants fired two rockets before dawn, one of which caused major damage to a family home in the southern city of Beersheba, 40 kilometers (25 miles) away, the Israeli army said.

The family of three narrowly escaped injury after their mother moved them into the safe room, with much of the rest of the house destroyed, the army said.

We commend AFP for correcting the misinformation that the damage was limited to the garden, but we question the editorial decis

ion to continue to bury in the fifth paragraph the fact that a house was directly hit, despite the fact that the event was a major escalation of hostilities.

CAMERA Arabic flagged AFP's Arabic coverage, which also initially stated that the rocket landed in the garden, and failed to note that the house was destroyed.

In a separate problem in its Arabic coverage, AFP claimed that the Israeli response, but not the initial Palestinian strike against a Beersheva home, was an escalation of events.