The Associated Press has charged Israel with “systematic discrimination” against Arab neighborhoods of east Jerusalem, citing an alleged “refusal” by the city of Jerusalem to grant building permits in those parts of Israel’s capital. The inflammatory allegations, which appear in a story published yesterday, hinge on out-of-context and incomplete data shared by the Israeli advocacy group Peace Now.

The accusations by AP and Peace Now are largely based on data from the Jerusalem municipality that shows Arab neighborhoods in east Jerusalem since 1991 have received 30 percent of the building permits issued to that section of the city, though Arab residents make up about 60 percent of east Jerusalem’s population.

According to AP reporters Joseph Krauss and Mohammed Daraghmeh,

The data … showed strong evidence of decades of systematic discrimination, illustrated by a huge gap in the number of construction permits granted to Jewish and Palestinian residents. …

The refusal to grant permits to Palestinian residents has confined them to crowded, poorly served neighborhoods, with around half the population believed to be at risk of having their homes demolished.

The data was acquired and analyzed by the Israeli settlement watchdog Peace Now, which says it only obtained the figures after a two-year battle with the municipality. It says the numbers show that while Palestinians make up more than 60% of the population in east Jerusalem, they have received only 30% of the building permits issued since 1991.

These are serious charges, and they call for serious scrutiny. But the article fails to treat the topic with the rigor it demands.

Absolute numbers of permits mean little on their own

Put plainly, if one population group requested more permits than another group, it would not be particularly surprising for it to receive more permits.

After communication with CAMERA staff, AP added a sentence acknowledging the missing information. “The data did not include the number of Jewish and Palestinian applications, or the rates of approval, though many Palestinians acknowledge not applying because they say it is nearly impossible to get a permit,” the added sentence noted.

Over the past three decades, according to Peace Now’s numbers, Arab neighborhoods received 9,509 permits, a figure that belies the claims that Israel “refuses” to grant permits to Palestinians or that it is “nearly impossible” for them to get a permit.

Incredibly, even after AP added the language clarifying that their data doesn’t account for the number of requests by each demographic group, the wire service refused to remove the unsubstantiated allegations about Israeli discrimination. It retained the pseudo-scientific claim that discrimination is “illustrated by” the gap in the number of construction permits granted. 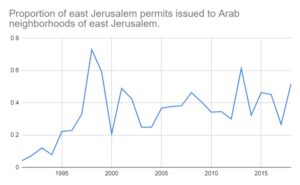 A chart based on data the Jerusalem municipality shared with Peace Now shows a distinct upward trend in the proportion of permits that went to Arab neighborhoods in east Jerusalem.

And what are the trends over time? By parroting Peace Now’s framing, AP missed other information conveyed by their out-of-context numbers.

As explained above, absolute numbers of permits mean little on their own. But if Associated Press reporters nonetheless believe those numbers are worth discussing, why didn’t they point out that the discrepancy between permits issued to majority-Arab and Jewish neighborhoods in east Jerusalem has been steadily declining since 1991, the first year of Peace Now’s data set? This is because the number of permits to majority-Jewish neighborhoods has trended downward over the past 30 years, even as the number issued to majority Arab-neighborhoods has trended upward.

These trends show that something — again, without more information we can’t know whether it’s municipal policy, residential attitudes, a combination of the two, or other factors — has been working to erase the discrepancy AP and Peace Now point to. They also mean that, although the Associated Press announces that Arab neighborhoods “have received only 30% of the building permits” issued to east Jerusalem since 1991, that figure doesn’t reflect the current reality very well: The discrepancy was largest in the early 90s, which means that over the past 5, 10, 15, and even 20 years, the percentage was much closer to 40 percent.

None of this proves that discrimination can’t exist in Jerusalem. It can exist there just like it can in other cities across the world. It does, however, show that Peace Now’s announcement falls short of the minimum standards expected from serious scholarship. And it does show that the Associated Press has failed in its obligation to fully and fairly inform readers.