A series of Agence France-Presse photograph captions this week erased the crimes of Bassam al-Sayeh, a Hamas field commander convicted for the authorization and finance of the murder of Rabbi Eitam and Naama Henkin, shot to death in front of their four children as they were driving in the West Bank in October 2015.
When prisoner al-Sayeh died this week in an Israeli hospital, as a result of complications from cancer, AFP photo captions ignored both his crime and his disease. While the captions noted that he reportedly died in Israeli prison, and included many other biographical details such as his age, that he was from Nablus, that he was allegedly the 221st Palestinian prisoner to die in Israeli jail, and that he was arrested by Israeli forces in October 2015, they omitted the two key points to understanding why he died in prison. 1) He died from his disease. 2) He was in prison for his role in a double murder. The failure to note his fatal medication condition falsely implies that he died due to prison conditions.
Here is a sample of the many incomplete captions AFP which omit his terror conviction but nevertheless include far less significant and less relevant biographical information about al-Sayeh: 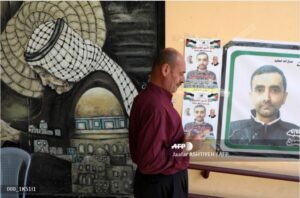 A man walks in front of posters showing pictures of Bassam al-Sayeh, a Palestinian who reportedly died in an Israeli jail, during a mourning ceremony at his home in the West Bank city of Nablus on September 9, 2019. Sayeh, 47, was arrested by Israeli forces in October 2015. Jaafar ASHTIYEH / AFP 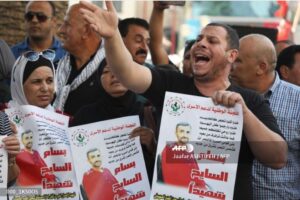 Palestinian protesters shout slogans during a demonstration in the Israeli-occupied West Bank city of Nablus on September 9, 2019, following the reported death of Bassam al-Sayeh (portrait) in an Israeli prison. Sayeh, 47, from the northern West Bank city of Nablus was arrested by Israeli forces in October 2015. "Al-Sayeh is the 221st Palestinian prisoner to lose his life in Israeli prisons since 1967" said a spokesman of the prisoner rights organization. Jaafar ASHTIYEH / AFP

Notably, the posters featured in the above photo are emblazoned with an antisemitic, inciting poem that originated in North Africa and is popular among Islamists including the Muslim Brotherhood and Hamas. The poem calls for violence against all Jews:

Take a heart that became as hard as iron

Take it and stone [with it] all Jews

Take my spirit that will provide shade to you all

It didn't live while flapping [its wings] from far away

My people, be patient for the dawn is coming

And the sun of victory shall rise again

When one takes into account that al-Sayeh was behind the brutal murder of two Jewish parents in front of their young children, that his supporters would display slogan should hardly be surprising. But by concealing both the slogan's meaning and al-Sayeh's crimes, AFP falsely casts al-Sayeh as a victim, not the accomplice to murder that he was. 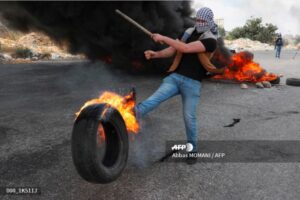 A Palestinian protester kicks a burning tyre during a demonstration near the Jewish settlement of Beit El in the occupied West Bank on September 9, 2019, following the reported death of Bassam al-Sayeh in an Israeli prison. Sayeh, 47, from the northern West Bank city of Nablus was arrested by Israeli forces in October 2015. "Al-Sayeh is the 221st Palestinian prisoner to lose his life in Israeli prisons since 1967" said a spokesman of the prisoner rights organization. Abbas MOMANI / AFP

As the Times of Israelreported, both Hamas and Israel agree that al-Sayeh held responsibility for the murder of the Henkins:

Sayeh, 47, had been convicted in Israel of authorizing and helping fund an October 2015 shooting attack on a West Bank road in which Eitam and Naama Henkin were gunned down in front of their four children, a Shin Bet spokesman said. . . .

The Israel Prisons Service confirmed in a statement that Sayeh had died. It said the Hamas operative had suffered from incurable chronic illnesses since he first came into its custody in October 2015.

The Izz ad-Din al-Qassam Brigades, Hamas’s military wing, said in a statement that Sayeh served as a field commander in its ranks and was one of the perpetrators of the attack against the Henkins.

Given that the captions include claim of questionable relevance that al-Sayeh was the 221st Palestinian prison to die in Israeli jail, then they certainly should contain the absolutely basic information that he was a Hamas field commander convicted for his role in the murder of the Henkins and that he died from his disease. (Prisoners die of natural causes in jails around the world all the time. Since when do figures about numbers of prisoners dying from natural causes in jail warrant space in AFP photo captions?)
CAMERA has contacted editors to request that the essential information about al-Sayeh's crime and his disease be added to the caption. Stay tuned for any updates.
With translation by CAMERA Arabic.
This post was corrected on September 16 as it originally mistakenly said that al-Sayeh died in an Israeli prison. In fact, he died in an Israeli hospital.
Donate Now