In response to communication from CAMERA, Reuters amended the Sept. 1 article to make clear that the U.S. sale of F-35s to Turkey was suspended. See below for a detailed update.

In the context of potential U.S. sales of the advanced F-35 fighter jet to the United Arab Emirates, Reuters has repeatedly misreported that Turkey is among the American allies who in the past have received the aircraft. Most recently, a Sept. 1 article by Lisa Barrington and Dan Williams ("Amid talks with Israel, UAE pursuit of stealth jets rumbles in background") erred:

The United States has sold the F-35 to allies including Turkey, South Korea, Japan and Israel. 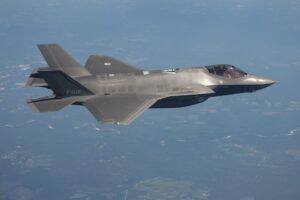 After a year of speculation about what would happen to Turkey’s F-35s after the country was ousted from the joint strike fighter program last year, the Defense Department gave its definitive answer Monday evening in a characteristically anticlimactic manner — through its daily contract announcements.

Turkey had planned to buy 100 F-35As over the course of the program, but was ejected from the program last July after accepting the S-400 air defense system from Russia after repeated warnings from U.S. officials. At that point, Turkey’s first F-35s had already rolled off the production line and its pilots and maintainers were training to fly and fix them stateside alongside U.S. personnel at Luke Air Force Base, Ariz., and Eglin Air Force Base, Fla. However, the aircraft were never officially delivered to Turkey.

According to Lockheed Martin, US allies who have or are procuring F-35's are Israel, Japan, South Korea, Poland and Belgium.
CAMERA contacted Reuters about the error yesterday but as of this writing the articles have yet to be corrected.

The Jerusalem Post and Israel Hayom, which both ran Reuters stories with the incorrect claim, both commendably corrected yesterday in response to communication from CAMERA. In addition to the inaccurate claim within the article itself, the error had also appeared in Post's subheadline: "The United States has sold the F-35 to allies including Turkey, South Korea, Japan and Israel."
Following communication from CAMERA, The Post amended the subheadline and article to accurately report:

The United States has sold the F-35 to allies including South Korea, Japan and Israel. A previous sale to Turkey was canceled after Ankara decided to purchase advanced Russian-made air defense systems.

Israel Hayom commendably deleted the erroneous reference of a sales to Turkey. Neither The Post nor Israel Hayom, however, appended a correction notifying readers of the change, a standard journalistic practice.
Stay tuned for an update about a correction from Reuters. 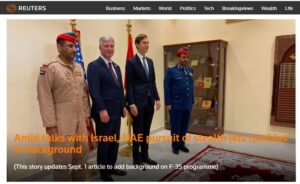 In response to communication from CAMERA, Reuters commendably corrected the Sept. 1 article, which now accurately reports:

The United States has sold the F-35 to allies including South Korea, Japan and Israel. Turkey’s participation in the F-35 programme was suspended over its purchase of an advanced Russian anti-aircraft system.

Furthermore, editors placed the following note prominently at the top of the article alerting readers to the change: "(This story updates Sept. 1 article to add background on F-35 programme)."