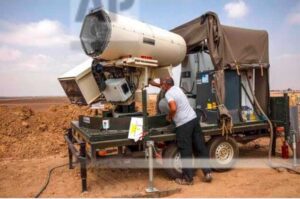 The caption accompanying the Aug. 30 photograph at left stated:

In fact, in recent weeks, since Aug. 10 until last night when a ceasefire was reportedly achieved, Hamas activists have launched dozens of incendiary balloons daily, as evidenced by the dozens of fires ignited by these balloons every single day. Many of the balloons don’t succeed in lighting a fire, so if there are 25 recorded fires in a day, there were many more balloons.
On Aug. 29, the incendiary balloons ignited at least 23 fires, Sunday over 20 fires were ignited, on Aug. 15 there were 19 fires, 60 fires on Aug. 11, 24 on Aug. 12, and so on. Since Aug. 10, the fewest number of fires has been 19 (on Aug. 15), and the most has been 60. Given that, as previously mentioned, many of the launched arson balloons don’t succeed in lighting fires, there have been well over 1000, if not thousands, of incendiary balloons.
See also “Los Angeles Times Corrects: Gazans Launched Dozens of Flaming Kites, Balloons — Daily”