A Feb. 23 Reuters video (also on YouTube) about Gaza Strip residents learning Hebrew in preparation for work in Israel erroneously displays footage of the West Bank instead of the Gaza Strip. Starting at 1:45 into the broadcast, the following scenery appears: 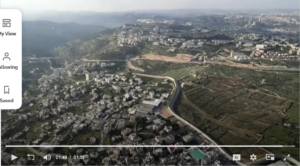 The narrator states at that point: “Some 2.3 million Gazans live in the [inaudible] coastal strip largely unable to leave to seek work abroad and squeezed in by 15 years of restrictions imposed by Israel. Gaza also borders Egypt, which imposes its own restrictions.” 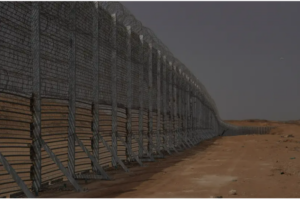 Given the hilly terrain, the footage that Reuters used is surely the West Bank, not the Gaza Strip. Moreover, the Gaza-Israel border is demarcated largely by an iron fence (at left) which does not resemble the concrete wall shown in the Reuters broadcast.
CAMERA last week alerted Reuters editors to the mistaken footage, but as of this writing, the video has yet to be corrected. The failure to address the issue is puzzling given that Reuters has a dedicated unit within its editorial department responsible for fact-checking visual material and social media claims. If Reuters fails to correct errors in its own visual material when outside observers flag them, how can the news agency be considered credible when it comes to debunking social media misinformation?