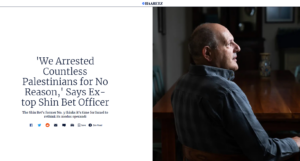 A Feb. 17 headline in Haaretz‘s English edition misquotes former Shin Bet officer Haim Rubovitch. The headline is: “‘We Arrested Countless Palestinians for No Reason,’ Says Ex-top Shin Bet Officer.” But in the accompanying interview with Haaretz journalist Amos Harel, Rubovitch actually said: “We arrested countless people for no reason.” People, not Palestinians.
The context was the Lebanon war and the full quote, as it appears in the article, is:

Total chaos set in. We made arrests in crazy numbers. We filled the Ansar detention camp to capacity. The truth is that the only way to survive in Lebanon in those years was for someone to join an armed militia. The simplest thing for us was to take a Palestinian like that and place him in detention. I was in charge of Rashidiya, the largest [Palestinian] refugee camp in the area, south of Tyre. Throw a stone and you would hit a wanted person. We arrested countless people for no reason.

Moshe Ya’alon, who was the IDF chief of staff at the height of the second intifada, spoke of the need to “burn the Palestinians’ consciousness” – to exact a sufficiently high price to make the Palestinians realize that there was no point in continuing to perpetrate acts of terrorism.

Ya’alon did not speak of the need “to burn the Palestinians’ consciousness.” In his 2002 interview with Haaretz’s Ari Shavit, Ya’alon said:

If this is not burned [seared] into the Palestinian and Arab consciousness, there will be no end to the demands upon us.

Thus, a more accurate translation would be “to burn into the Palestinians’ consciousness.” Indeed, the Hebrew version of Amos Harel’s article last month more accurately reported:

Moshe Yaalon, the chief of staff during the peak of the Intifada, spoke during that period of the need for the “searing of consciousness,” extracting a heavy enough price to bring the Palestinians to the recognition that additional acts of terror don’t pay.

This particular Ya’alon quote has been frequently misreported in the international press, prompting corrections at The New York Times, Chicago Tribune, Boston Globe, Time, Los Angeles Times and more, particular care should be exercised in precisely report the quote.
For more instances in which Haaretz‘s English edition introduced misinformation which did not appear in the parallel Hebrew coverage, please see “Haaretz, Lost in Translation.”