If a picture is worth a thousand words, the nine Reuters photographs marking Israel’s 61st Independence Day send a much more concise message: according to Jews and Arabs living within Israel’s borders, Israel should not exist. All those Israelis who think otherwise are war-mongers raising their children to be war-mongers.

Israelis traditionally mark Independence Day by swarming to the national parks, beaches and street festivities. Barbeques are a favorite activity enjoyed on the nation’s birth day, as noted this weekend by Sayed Kashua, an Israeli Arab writer for Ha’aretz.

The celebrations began on Tuesday on Mount Herzl in Jerusalem, as the flags lowered to half-mast for Memorial Day were raised again, and the ceremonial torches were lit.

This year, festivities centered around the theme of Tel Aviv’s centennial. Among Tuesday’s torch-bearers were Tel Aviv’s iconic former mayor Shlomo (“Chich”) Lahat, and the son of Israeli painter, sculptor and author Nahum Gutman, in whose art the city was frequently featured.

In Tel Aviv itself, police had to cordon off the popular Florentin neighborhood, as the number of street-party revelers exceeded the anticipated 5,000. In Givatayim, both religious and secular Jews marked the occasion at the city’s Wohelin square. “We are celebrating with [kidnapped Israeli soldier] Gilad Shalit in our hearts,” said one local resident, Maya Hirsch, 40. “Independence is not something you take for granted.”  . . . .

Yesterday, spectators on promenades in Israel’s coastal cities observed a parade of the Israeli Navy, and a fly-by performed by the Air Force. The military aircrafts were joined, for the very first time, by civilian ones – as four El-Al airplanes saluted Tel Aviv. The lead plane, a Boeing 747-400, named “Tel Aviv,” was accompanied by a Boeing 777 named “Sderot,” a 767 named “Mishmar Haemek,” and a 737 named “Kinneret.”

While Reuters photographers did manage to find representatives of the minute fraction of Israel’s population belonging to the fringe Neturai Karta movement, they had more difficulty locating any of the millions of normal Israeli civilians happy to live in a sovereign Jewish state. Unless, of course, those Israelis were decked out in military gear and appeared to be imbuing their young admirers with a lust for war. Thus, Reuters’ three photographs of Zionist Israelis on Independence Day are: 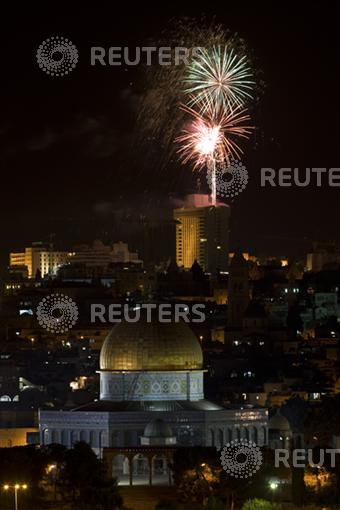 The Dome of the Rock is seen in Jerusalem’s Old City as fireworks
explode during celebrations for Israel’s Independence Day April 28, 2009.
REUTERS/Darren Whiteside

The second photograph of the Dome of the Rock and fireworks is nearly identical to the first.

Precedent for an Editor’s Note
Reuters should send out an editor’s note to its subscribers around the world apologizing for the misleading depiction of Israel’s independence day. There is a precedent for such a step. When the New York Times gave more prominent visibility to a few hundred anti-Israel protestors than to the hundreds of thousands of Israel supporters at a 2002 rally, the paper of record ran the following editor’s note:

Editor’s Note (5/7/02): An article yesterday about a parade in Manhattan marking Israel’s 54th anniversary reported that 100,000 people had registered to march and hundreds of thousands more lined Fifth Avenue in support. The article also said that anti-Israel protesters numbered in the hundreds. A front-page photograph, however, showed the parade in the background, with anti-Israel protesters prominent in the foreground, holding a placard that read, “End Israeli Occupation of Palestine.” Inside the newspaper, a photo of a pro-Israel marcher was juxtaposed with a picture of protesters, one waving a sign that likened Zionism to Nazism. Although the editors’ intent in each case was to note the presence of opposing sides, the effect was disproportionate. In fairness the total picture presentation should have better reflected The Times’s reporting on the scope of the event, including the disparity in the turnouts.

What Reuters Missed
The competing photo news service, Associated Press, ran a variety of photographs marking Israel’s Independence Day. While AP did provide images of Neturai Karta Jews opposed to the Jewish state, and photos of Israelis visiting military bases and climbing on army hardware (some bases open their gates to the public on Independence Day and attract big crowds), the service captured the major festivities. AP photographers even managed to make it to Tel Aviv, Israel’s largest metropolis and the center of this year’s celebrations. Here is a sampling of the kinds of AP images that Reuters failed to photograph: 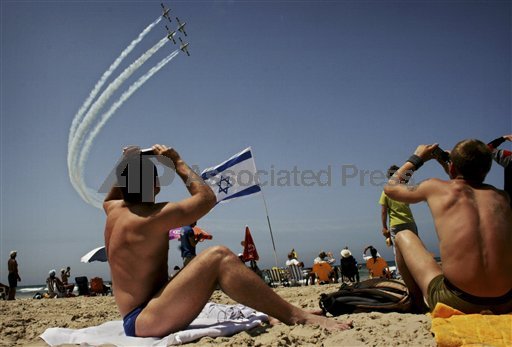