Using misleading commentary and briefs between viewer phone calls to its Aug. 16, 2019 Washington Journal program, C-SPAN manipulated the “Israel bars Reps. Tlaib & Omar from visit” hour-long segment about the turmoil surrounding the planned visit of Congresswomen Rashida Tlaib and Ilhan Omar. As an indication that the trip was to be used for propaganda purposes, the sponsor is a group specializing in anti-Israel propaganda. This was revealed here in a statement by Prime Minister Netanyahu quoted at four minutes into the segment by host Brawner and which included this:

Only A few days ago we received their [Tlaib/Omar] itinerary for their visit in Israel, which revealed that they planned a visit whose sole objective is to strengthen the boycott against us and deny Israel’s legitimacy… In addition, the organization that is funding their trip is Miftah which is an avid supporter of BDS, and among whose members are those who have expressed support for terrorism against Israel.

But this was the segment’s only reference to Miftah except for a guest’s nondescript one (“sponsored by a Palestinian group”) (more below).

As an indication of the hour-long Tlaib/Omar focus’ lack of balance, among the several between-calls features – none (aside from the Netanyahu quote) were favorable to the Israeli position regarding the trip. In fact, the only aspect that could be considered balanced is the divide among the 22 callers pertaining to attitude toward Israel: nine pro, nine against, four neutral. The lack of balance was indicated by the failure to describe the highly problematic group sponsoring the Tlaib trip.

The Palestinian group, Miftah, sponsoring the Tlaib/Omar trip was not described here by C-SPAN. It once malevolently claimed that Jews use Christian blood in making matzah, the unleavened bread used in the Passover observance (Seder). Miftah routinely defames the Jewish state in its publications, falsely accusing Israel of “massacres,” “apartheid,” “summary executions” of Palestinian youth and “Judaizing” Jerusalem. Miftah’s founder and adviser and high-ranking official of the West Bank Palestinian Authority, Hanan Ashrawi, has frequently defamed Israel as she did recently in a CNN interview in which she uttered several falsehoods and distortions.

Clearly, the Tlaib/Omar trip was intended as an anti-Israel propaganda one.

The fourth caller’s misinformation (“We also know [Prime Minister] Netanyahu is under investigation. His wife is serving time for taking bribes.”) prompted this Brawner response: “NBC News with the headline ‘Sara Netanyahu’ — the legal cloud over the prime minister’s wife has no direct influence on corruption cases facing her husband.” But the host failed to correct the caller’s false claim about Sara Netanyahu’s penalty – it does not include any prison time. Sara was convicted of using public funds to pay for meals at the Prime Minister’s residence. Under Israeli law, this is considered illegal as the government provides a cook to cater for the prime minister, his family and their guests. Sara will pay a fine of 55,000 shekels ($15,200) as part of a plea agreement.

Between the 10th and 11th calls, Brawner provided an eight minute phone interview of a senior writer with The Hill, a Washington, D.C. political newspaper and Website that routinely misinforms about Israel and its supporters. 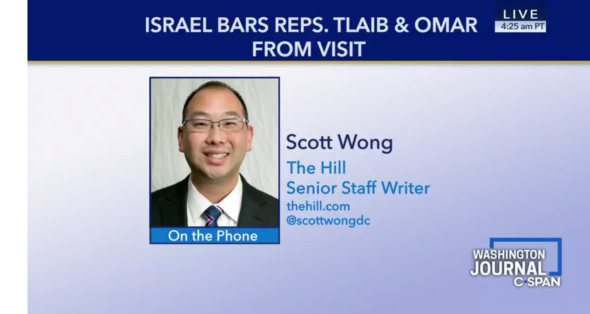 The American Israel Public Affairs Committee (AIPAC) sponsored the recent congressional visit to Israel available to all members of Congress but Tlaib and Omar declined that visit and decided they would travel separately. Scott Wong noted that the Tlaib/Omar trip was to be “sponsored by a Palestinian group” – this was all that was said at this point about the highly problematic group. Using loaded language, Wong characterized AIPAC as a “very powerful Jewish lobby” and the two anti-Israel propagandizing congresswomen as merely “progressive, outspoken women.”

Shortly after the C-SPAN segment, Tlaib rejected Israel’s offer to allow her to visit her grandmother because the visit would be “supervised,” something she characterized as “oppressive conditions.” It’s possible that Tlaib’s rejection was at least partially related to a realization that heightened interest about her visit would likely include media scrutiny that would not fit well with her victimization narrative since it could show that the Tlaib family West Bank village is thriving and the family is apparently living quite well.

This led some to ask whether Tlaib’s need to propagandize trumps her love for her grandmother.

Wong’s characterization of AIPAC as a “very powerful Jewish lobby” is quite problematic. This phrase is almost the exclusive domain of obsessively anti-Jewish, anti-Israel groups. This can readily be discerned by searching the Internet.

Furthermore, while AIPAC is the best known single pro-Israel group, the key component of support is represented by continuing majority support among the American people for Israel especially among the sizable community of Christian Zionists. An example is Christians United for Israel (CUFI) which describes itself as “the largest pro-Israel grassroots organization in the United States, with over 5 million members.”

Regarding U.S. financial aid to Israel

This is the reality about the U.S.-Israel financial agreement never mentioned by C-SPAN: The arrangement provides for $3.3 billion annually for weapons, including jet fighter aircraft, with $500 million for missile defense. This aid to Israel constitutes only a tiny portion of the U.S. federal budget (less than 0.1 percent). Further, the aid dollars must be used to purchase military materials in the United States which helps create or sustain thousands of American jobs. Third, cooperative arrangements with Israel provide technology benefits to America related to unmanned aircraft, anti-missile defenses, battlefield medical techniques – and intelligence on anti-U.S. as well as anti-Israel Arab and Islamic radicals. Importantly, no American troops are or have ever been casualties fighting for Israel because Israel completely defends itself against all aggression (which has been plentiful).

It’s not surprising that former  U.S. Joint Chiefs of Staff Chairman Admiral Mike Mullen called the relationship with Israel “absolutely critical” to U.S. national security. Additionally, Israel, with less than nine million people, is America’s 20th largest customer (larger than Russia or Spain). Consider votes in the United Nations over the last several years that coincided with U.S. votes – Israel sided with the United States 90 percent of the time, all other recipients of U.S. support stood at less than 20 percent – Pakistan, Jordan, Egypt, Iraq, Afghanistan, Philippines and others.

Moreover, an extensive real-cost study published February 2017 exploded the myth that Israel has been the largest beneficiary of U.S. military aid money by showing that Israel ranks below Japan, Germany, South Korea and Italy. Furthermore, realistic cost analysis would show that while America has spent trillions of dollars in Iraq and Afghanistan and the blood of U.S. troops – Israel does not require U.S. troops while it successfully battles the same enemy – the West Bank, Gaza Strip, Syria and Lebanon components of world wide Islamist terrorism.

So this aid can reasonably be considered the best bargain the American taxpayer has in terms of U.S. aid to any nation.

C-SPAN states that its mission is to “provide access to the live gavel-to-gavel proceedings of the U.S. House of Representatives and the U.S. Senate, and to other forums where public policy is discussed, debated and decide … all without editing, commentary or analysis and with a balanced presentation of points of view.” But the “balanced presentation” part as it pertains to Israel is routinely untrue.

CAMERA’s decades-long coverage of C-SPAN reveals the dark side subjecting potentially millions  of viewers routinely to “public event” anti-Israel indoctrination without the network even bothering to issue a standard broadcast disclaimer such as: “Points of view expressed in this program are not necessarily those of this network.” The network’s daily three-hour morning call-in show, Washington Journal, has also been consistently problematic.

C-SPAN’s decades-long broadcasting of misinformation and disinformation about Israel continues with no end in sight. This behavior could be explained away as shoddy journalism, journalistic malpractice or simply incompetence – except for the fact that Israel is the only foreign nation routinely vilified on C-SPAN’s airways.