This is the third in a series of posts by CAMERA Arabic (part 1, part 2) exploring how Arabic-language news networks, including those affiliated with Western media outlets, frame the topic of Jews who originate from or live in the Middle East and North Africa by distinguishing between “loyal” Jews and “treacherous” Zionists. All translations, emphases and in-bracket remarks are by CAMERA Arabic unless otherwise specified.

The two previous posts in the series focused on media coverage of Tunisian Jewry. It is a small, Middle Eastern Jewish community, which faces scrutiny from the Arab Muslim majority which questions the former’s “Tunisian patriotism” when issues relating to Israel or “the Zionists” arise. As the two posts demonstrated, those concerns are often uncritically echoed by mainstream media outlets that cover Tunisia, like BBC Arabic (which maintains that it adheres to vital standards of journalism as practiced in the West) and London-based al-Quds al-Arabi (which does not follow Western standards, nor has it ever before).

It was only fitting, then, that the most recent heated debate on the matter (described in detail in the first post) was triggered by Israeli tourists of Tunisian roots who chanted “long live Israel and long live Tunisia!” – strange fish in a discourse that takes the dichotomy between tolerable Judaism and hostile Zionism for granted. Indeed, unlike the couple of thousands of Jews who live in Tunisia and whom the Arabic-speaking media were still able to somehow classify as loyal Arabs, the tens of thousands of Tunisian Jews who currently live in Israel pose a far greater challenge to the narrative they have been promoting all along.

The subject of Jewish communities who lived in the countries of the Arab and Islamic world for centuries, their recent history and their current whereabouts, is still a sensitive subject in Arab society. Therefore, seldom is it discussed openly and fearlessly in Arabic-speaking media outlets.

Tunisia, in this respect, is the exception that proves the rule, since it still has a functioning Jewish community; but what about so many other Muslim and Arab countries, whose remaining Jewish residents are numbered? Admittedly, modern-day Mizrahi and Sepharadic Jews do appear occasionally in the public discourse of countries like Egypt, Algeria, Bahrain and Iraq. However the suffering they and their ancestors endured as they were forced to emigrate from the countries of which they were once citizens is met with true empathy, one that is expressed publicly in Arabic, only among a handful of public figures. 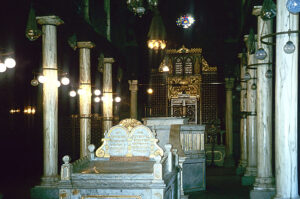 The Ben Ezra synagogue in Cairo dates back to the eighth century (Photo by Roland Ungar, Wikimedia Commons)

Even fewer are the voices who express such empathy without giving in to the need to indulge in apologetics by denouncing Zionist Israel at the same time. A good example for a text that contains this exact flaw, while nevertheless expressing sincere sorrow for the absence of Jewish population in an Arab Muslim country, is the following op-ed by Egyptian poet Fatima Na’out, entitled “Egyptian Jews of Egypt.” It was published last Rosh Hashanah by the Egyptian weekly al-Masri al-Yawm (full translation and in-text remarks by MEMRI, emphases by CAMERA Arabic):

[…] there are Jews who are native Egyptian citizens and have nothing to do with Israel, and whose attitude towards Israel is one of renouncement, no different from the attitude of all us Egyptians towards the occupying Zionist entity.

As a matter of fact, the Jews of Egypt paid dearly for the establishment of the State of Israel; they were persecuted and exiled from their homeland, expelled from their homes by force, and their institutions and factories were torched. [The Jews] experienced various disasters, until they almost completely disappeared from the Egyptian landscape. The awkwardly-phrased title [of this article]… is directed at those who do not know that religious faith has nothing to do with [national] identity and citizenship, and that a citizen’s [religious] beliefs do not detract from his civil rights.

[…] It is sad that half of the university graduates in Egypt think that a Jew is necessarily a Zionist or even an Israeli, and it is sad that many of us do not distinguish between Judaism as a religious faith and Zionism as [a form of] political fascism.

The honorable Jews of Egypt, who loved Egypt with all their hearts, were persecuted with violence and hatred by blind and ignorant thugs until they were forced to leave [the land] where they had been born and bred, the land they had loved and helped to make prosperous. They knew no other homeland. On the occasion of your holiday [Rosh Hashanah], which took place yesterday, I convey to you my love and my apologies. Even if there are only four (4) of you left, history will never forget your patriotism, nor will Egypt. Someday soon the state of education in my country will improve, and Egyptian children will learn in school that the Egyptian Jews loved their homeland more than millions [of Egyptians] who do not appreciate it. May Allah curse those who mixed [the issue of religious] faith with [the issue of] citizen rights.

In her Op-Ed, Na’out extended genuine “Shanah Tovah” greetings to the few elderly Jews who still call Egypt home, as well as commendably lamented the absence of thousands of others. She even admitted that Jews were forced out of Egypt due to violent persecution, hatred, ignorance and bullying (despite not addressing the role of the Egyptian state in this ugly chapter of Egypt’s history.)

Yet her attack on Zionism and Israel (whose territory the Op-Ed labeled “occupied Palestine”) came at the expense of acknowledging important information regarding Egyptian Jews’ current residency, demographics and political affiliations. Indeed, Na’out’s “Egyptian Jews of Egypt” are no particular exception to the rule that applies to the rest of the Jews whose families left the Arab and Muslim world in previous generations: the overwhelming majority of them either reside in Israel, support it firmly, play a key role in Israeli politics, culture, economy and social life, or (most commonly) all of the above.

Na’out couldn’t help but overlook the concrete, flesh-and-blood Jews of Egyptian ancestry instead of focusing on the virtual, absent ones whose image she invokes; the very existence of Zionist Egyptian Jews such as Haim Saban or ‘Ada Aharoni, or even of Jews of Egyptian ancestry who are more critical towards Israel and Zionism but still live and work in “the Zionist entity” and hold its citizenship, like Eyal Sagui Bizawe or Ron Cahlili, could be quite unsettling for her and those who share the same narrative she promotes.