The City University of New York (CUNY) has a deep antisemitism problem. This is no secret. Reports of antisemitic incidents have been streaming out for years. What is particularly disturbing, however, is the role that has been played by CUNY faculty and particularly the administrators. This has been most recently illustrated by the revelation that CUNY’s chief diversity officer, Saly Abd Alla, was assigned to investigate a complaint filed about antisemitism notwithstanding she was previously a “civil rights director” at the Council for American Islamic Relations (CAIR), an organization notorious for its antisemitic positions and antisemitic staff.

This is far from the only incident in which CUNY administrators and faculty have demonstrated either bigotry themselves, or a distinct lack of concern for antisemitism. A complaint filed by the Brandeis Center to the Department of Education detailed how faculty and administrators at a program at CUNY’s Brooklyn College harassed and intimidated Jewish students, including a professor telling Jewish immigrants that they are “oppressors” in the United States and that Jewish students need to get their “whiteness” in check. Others told Jewish students to stay quiet and keep their heads down when confronted with anti-Jewish harassment. How telling Jews to just hide lives up to CUNY’s diversity and inclusion statement and its commitment to ensure “genuine participative membership” remains a mystery.

Another complaint, filed by the American Center for Law & Justice, detailed numerous other instances of faculty and administrators behaving badly when it came to antisemitism.

Particularly notable is how they not only ignored Jewish concerns, but often added insult to injury. When Jewish students were ejected by a college official from an event for simply holding a fact sheet about Zionism, Brooklyn College refused to admit wrongdoing for over a year and then made baseless claims that the students had been “disruptive.” Another incident involving swastikas in a campus bathroom, at John Jay College, saw the administration jump to denialism and claim it was “false and nothing more than unsubstantiated rumor,” before later being forced to admit it did find the swastikas and had even been in possession of photos of them.

The situation has gotten so bad that both the Department of Education’s Office of Civil Rights (OCR) and the Equal Employment Opportunity Commission (EEOC) have gotten involved. While the OCR investigation is ongoing, the EEOC has previously determined that there was reasonable cause to believe Jewish professors had been discriminated and retaliated against, and that CUNY and its Professional Staff Congress had created a “hostile working environment” for observant Jews and Zionists.

Far from taking these concerns seriously, CUNY officials have instead adopted a pattern of rubbing it in the Jewish community’s face. Assigning Abd Alla as chief diversity officer to investigate such complaints, notwithstanding her past with the CAIR, is only one example. 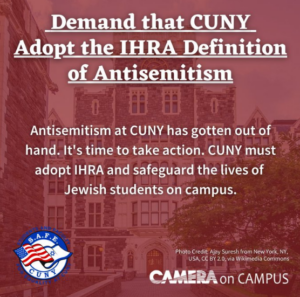 A graphic by CAMERA on Campus promoting the adoption of the International Holocaust Remembrance Alliance’s definition of antisemitism.

At Kingsborough Community College (KCC), an advocate of the antisemitic Boycott, Divestment, and Sanctions movement was recently appointed to its Diversity, Equity, and Inclusion search committee, which included not a single Jewish member. This came despite repeated inquiries to KCC President Claudia Schrader, from the KCC professor who was the subject of the EEOC determination, as to what steps were being taken to ensure the committee’s decisions would protect observant and Zionist Jews.

In a complaint filed by the Brandeis Center over antisemitism at the University of Vermont, for which the OCR just opened an investigation, attorneys Alyza Lewin and Denise Katz-Prober eloquently explained why harassment of Jews for their Zionism is unlawfully discriminatory:

“Zionism is as integral to Judaism as observing the Jewish Sabbath or maintaining a kosher diet. Of course, not all Jews observe the Sabbath or keep kosher, but those who do clearly are expressing important components of their Jewish identity. Similarly, not all Jews are Zionists. But for many Jews, including many Jewish students at UVM, identifying with and expressing support for the Jewish homeland is also a sincere and deeply felt expression of their Jewish ethnic identity. Harassing, marginalizing, demonizing, and excluding these Jewish students on the basis of the Zionist component of their Jewish identity is just as unlawful and discriminatory as attacking a Jewish student for observing the Sabbath or keeping kosher.”

At CUNY, the antisemitism is comprehensive. In addition to the rampant “anti-Zionism,” such as blaming “the Zionist administration” for tuition costs, faculty groups have also engaged in discriminatory actions like intentionally holding meetings on the Jewish Sabbath in order to exclude observant Jews.

That CUNY’s “chief diversity officer” comes from an organization which is avowedly “anti-Zionist” (and which tells followers to “pay attention” to synagogues because the “polite Zionists” are “not your friends”) demonstrates the antisemitic rot is not only deep, but institutional. It also evidences a disturbing reality that at least in this case, academia is not an ally in the fight against antisemitism. To the contrary, the CUNY system itself appears to be the problem.