NBC News’ biography of Mehdi Hasan claims he is “an award-winning journalist known for riveting one-on-one conversations.” However, Hasan fell far short of “award-winning journalism” during his recent segment interviewing the cofounders of Ben & Jerry’s. This is particularly evident when one contrasts his interview with that of Axios’ Alexi McCammond, who delivered a masterclass while interviewing the same subjects just last year. While the latter handled her interview with a professional focus on getting her subjects to address and dig into the issues, the former seemed focused on preserving his preferred narrative.

Consider just this portion which Hasan proudly tweeted, when he asks Ben Cohen and Jerry Greenfield:

“Then a lot of bad faith actors try to claim that not wanting to sell Ben and Jerry’s ice cream in the occupied territories illegally occupied is somehow anti-Jewish, antisemitic. As someone yourself who is Jewish but who’s been critical of Israel’s occupation for many years now, what is your response to those critics?”

Putting aside Hasan’s obsession with tokenism and mocking concerns of antisemitism, his question is, professionally speaking, unserious. It begins with Hasan describing Ben & Jerry’s critics as “bad faith actors.” That is, he begins by portraying the story as good faith truth versus bad faith slander. There is then no subsequent genuine effort to unpack the criticisms, explore the arguments, and allow for his audience to get an honest assessment of the competing narratives.

Note that this isn’t for lack of time. Indeed, the Mehdi Hasan interview ran about five minutes, the same length as that of the relevant portion of the Axios interview.

Contrast Hasan’s questions with McCammond’s interview a year ago. She began with questions about the “backlash,” asking if they were “surprised by the backlash that came” and how they felt about being “wrapped up in accusations of being antisemitic?” This enabled both Greenfield and Cohen to present their case, but McCammond then bore down on the real questions. This enabled her audience to explore the nature and contradictions of Cohen & Greenfield’s positions, the strengths and weaknesses of their arguments, and the relevant issues that perhaps the audience would not have otherwise considered. 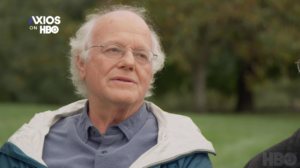 Ben & Jerry’s cofounder Ben Cohen after being asked by Alexi McCammond why the company doesn’t boycott Georgia or Texas because of policy disagreements.

This led to the viral moment from that interview, when Cohen and Greenfield, after arguing that their decision was about Israeli policies and not Israel’s existence, sat speechless and visibly shocked when McCammond asked “You guys are big proponents of voting rights. Why do you still sell ice cream in Georgia? Texas? Abortion bans. Why are you still selling there?” When they finally regained their composure, Cohen responded “I don’t know. I mean it’s an interesting question. I don’t know what that would accomplish….I mean, I think  you asked a really good question and I think I’d have to sit down and think about it for a bit.”

Cohen continued: “By that reasoning, we should not sell any ice cream anywhere. I’ve got issues with what’s being done in most every state and most every country.”

McCammond was thus able to get her interview subjects to directly address the source of the controversy. Critics of Ben & Jerry’s have pointed to this very issue, the fact that the company seems to be applying a standard to the world’s only Jewish state that it has not applied to any other country or state.

She thus got to the heart of the controversy, and created a viral story, by simply asking probing questions and allowing her interview subjects to tangle with them in front of her audience.

The cofounders were given an opportunity to directly respond to the contradictions and issues she exposed, too. Greenfield followed up on Cohen’s remarks by suggesting that the “thing that’s different is that what Israel is doing is considered illegal by international law, and so I think that’s a consideration.” McCammond could have pressed on this point, given that countless countries are engaged in behavior “considered illegal” by some under international law, but she had already admirably performed her role as a journalist, exposing the core tensions at issue. In this way, McCammond treated her interview like a professional journalist.

In contrast, Hasan treated his interview like an activist.

He seemed focused on protecting his preferred narrative with questions like “What is the social mission of the company that you’re trying to defend tonight” and “How does this come together with your social mission.” It should go without saying that regardless of one’s views, uncritically handing a microphone to two wealthy businessmen in a story involving a megacorporation, large sums of money, and potential violations of various laws falls short of “award-winning journalism.”

Longtime ABC reporter and subsequent CNN anchor Aaron Brown once said, “I know the difference between journalism and a slogan.” For those who do not, an educational lesson can be found by watching these two interviews.