Are German authorities speaking from both sides of their mouths about their obligations towards protecting the lives of Jewish Israeli civilians? 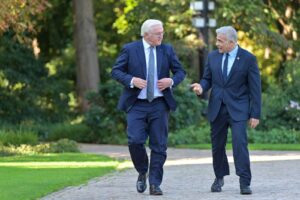 With this month’s 50th anniversary of the Munich Olympics massacre, widespread publicity focused on belated German acknowledgement of the government’s failure to safeguard the lives of Israeli civilians competing on its soil. Simultaneously, far under the media radar, a German court decision emerged which, it seems, reprehensibly rejected the lives of Israeli civilians as worth protecting.

In the official commemoration of the Sept. 5, 1972 Palestinian Black September terror attack, in which 11 Israeli athletes and a police officer were killed, German President Walter Steinmeier addressed the victims’ families, seeking forgiveness for the “inadequate protection afforded to the Israeli athletes.” He also lamented the German authorities’ decades-long “obstruction, ignorance and injustice.” Notably, a compensation settlement between the bereaved family members and the German government was finally reached the previous week.

Meanwhile, Berlin-based pundit Farah Maraqa deemed Monday as “a day for celebrations” following a local labor court reportedly ruling that the termination of her employment as a journalist at German public media outlet Deutsche Welle was “legally unjustified.”

DW fired Jordanian-Palestinian Maraqa and six other Arab employees earlier this year at the conclusion of a two-month internal antisemitism probe. Last week, she and her lawyers claimed that the Berlin court ordered Germany’s public broadcaster to reinstate her and pay all legal expenses. (The court have not confirmed the information; Deutsche Welle, which only four days before had introduced a new Code of Conduct where it states its support of “the right of Israel to exist,” said it has “taken due notice of the ruling.”)

Even before she moved to Germany and began her employment at Deutsche Welle, Maraqa was vocal about her antisemitism, having publicly praised a Jerusalem synagogue massacre as a noble act in the name of “Palestine and its cause,” perpetrated by “two martyrs.” Between 2014-2017, she expressed support for murdering unarmed Jewish civilians in Israel, including children, calling their murderers “heroes” who engaged in “Jihad,” and referring to rockets falling on Tel Aviv as “music to our ears.”

In a December 2015 critique of the “Islamic State,” Maraqa opined that if the terrorist organization would ever “throw the Israelis out of the Holy Land,” then she “will join their ranks.” Even after her initial suspension from DW in late 2021, she continued to insist that her past repertoire (originally published in UK-based website Rai al-Youm, where rabid antisemite Abdel Bari Atwan is editor-in-chief) was all within the framework of “professional journalism.”

If Maraqa’s lawyers’ claims are true, and the German judge has indeed opted to resolve Maraqa’s dispute against Deutsche Welle by fully upholding her position, this development stands in stark contrast to the German government’s statements regarding the 1972 Munich tragedy. Could it be that while the current Berlin government expresses deep regret for the historical mistreatment of the Israeli Munich victims and their families, the courts rule in favor of a media persona who repeatedly celebrated the murder of Israeli civilians?

Largely unsupervised German funding the United Nations Relief and Human Development Agency (UNRWA) also points to the country’s inconsistent stance on the value of Israeli civilian lives. According to expert Einat Wilf, UNRWA was responsible for creating the “basis of consciousness” from which the Munich murderers grew, as well as providing infrastructure for their organization to operate; “this is still true today,” she added.

Separately, German funding for the Palestinians’ educational system, with textbooks portraying the Munich attack as a legitimate act of “resistance” to Zionism and “Zionist interests abroad,” also contradicts the government’s stated concern for the lives of Israeli civilians. (See IMPACT-se research and policy center).

In both cases, German tax euros enable Palestinians to perpetuate a hyperbolized, mythical version of “the right of return”. This version is also inevitably violent, raising generations to embrace the conviction that no Israeli Jew can truly be considered a civilian so long as the state of Israel exists within any borders. It is this worldview – demonizing unarmed Jewish civilians as “colonizers,” “occupiers” or “settlers” who are therefore “fair game” due to an imagined set of “Palestinian rights” – that incentivized the 1972 terrorists to kill 11 Olympians.

And it is precisely the same worldview that brought Farah Maraqa to write, 42 years later, the following words about the Har Nof synagogue massacre of five worshippers and a police officer:

We, as Palestinians of various citizenships and origins, must remember that true media efforts are dedicated when two martyrs, like the ones who perpetrated the Jerusalem operation, are dedicating both of their souls to redeem that land, and when horror crawls into the settlers’ spirits. Then, the media has no other option but to speak about our [Palestinian] cause, even if all the politicians have betrayed us.

The ululations which the sister of Uday al-Jamal has uttered during the broadcast, with breaths where joy was mixed with bitter sadness for his departure – these ululations, mixed with tears – this is my only [way of] expression – this is the only expression of Palestine and its cause – it is these tears and ululations which will bring down all the political theories and the peace processes – it is they which will never settle a secure homeland for the Palestinian as long as they [i.e. Israeli civilians, like the ones massacred in the synagogue] are in our land – the women, then, shall keep ululating in pain – and we shall keep singing “We Refuse to Die” hailing our martyrs in the sky –

Ululate, O woman of Jerusalem – and the [Palestinian] cause shall once again become ‘the foundation’ in spite of all the politicians! [Emphases added.]

Without holding an unrepentant journalist employed by a publicly funded media outlet accountable for her antisemitism and incitement against Israeli civilians, how meaningful is Germany stated repentance for its past tolerance towards Palestinian terrorism?