“Now, how did Donna Edwards…lose this race? A lot of it has to do with dark money, and more dark money.”

So Mehdi Hasan claimed, pointing at AIPAC, at the beginning of his segment with Congressman Andy Levin on July 24th.

The problem? Donna Edwards, who lost to Glenn Ivey in the Democratic Primary for Maryland’s 4th Congressional District, was already losing before AIPAC’s United Democracy Project (“UDP”) got involved. As reported by Jewish Insider, “Polling conducted on behalf of Edwards’ supporters in early June, before UDP began spending in the race, already showed Ivey leading Edwards by 13%.”

Such details went unmentioned by Hasan, which is certainly no surprise given the content of the rest of his conversation with Rep. Levin, which sought to accuse Jewish “dark money” of “running the Democratic primary,” “corrupting our primary,” and “dominat[ing] our politics.”

Consider, then, how Hasan introduced his guest, Rep. Levin:

“Congressman Levin joins me now. Thank you for coming on the show. Let me get right to it. You are Jewish. Why is a pro-Israel lobby group using a super PAC and dark money to try and defeat you in a democratic primary?”

The person who made Jews the issue here is Hasan.

This isn’t just about the obvious and cringeworthy tokenism in this statement, though it is evident throughout the interview. Levin assured us shortly afterward that “I’m not just Jewish…I’m really Jewish,” and for good measure, Hasan emphasized to his viewers that Levin was a “former synagogue president,” which makes it “much harder to accuse [him] of being an antisemite.”

The tokenism is so transparent one almost wonders if the Mehdi Hasan Show has actually become a parody show.

What Hasan’s statement shows is his clear association of AIPAC, and its super PAC “dark money,” with Jews. Hence why he needed a token Jew to rail against the evils of the dark money he associates with Jews and blames for corrupting American politics.

It only gets more obvious when Hasan doesn’t voice any problem with the other PAC he mentions. Consider the fuller context of the statement that opened this article:

“Now, how did Donna Edwards, who was endorsed by Nancy Pelosi, Hillary Clinton, Elizabeth Warren, plus eleven local and national labor unions, the Progressive Caucus, and Emily’s List, lose this race? A lot of it has to do with dark money, and more dark money.”

Emily’s List, one of the largest PACs in the United States, is good, virtuous money, you see. AIPAC, however, is dark money.

According to Open Secrets, while AIPAC has spent approximately $27.5 million for the 2021-2022 election cycle, Emily’s List has spent more than double that, raising nearly $57.5 million. If you add UDP’s $22.5 million in independent expenditures, they’ve still spent less than Emily’s List.

So what is it, exactly, that distinguishes Emily’s List from AIPAC in Hasan’s mind?

Hasan didn’t explain but maybe his guest Andy Levin – who we’re repeatedly assured is not just Jewish, but really Jewish – can explain. 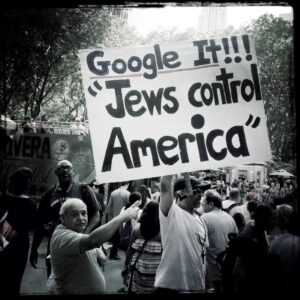 An example of the type of antisemitism that asserts Jews control governments.

Perhaps it’s that Hasan doesn’t like the cause AIPAC and its UDP stand for: a strong U.S.-Israel relationship. If that is the case, however, legitimate questions arise as to why the conversation wasn’t about whether AIPAC’s cause is bad or not, but about how AIPAC “dark money” is allegedly undermining democracy.

Hasan found time to try to connect AIPAC to the violence that occurred at the Capitol on January 6, 2021 because AIPAC endorsed Republican candidates who, Hasan asserts, “voted to overturn the election on January the 6th.” Repeatedly, Hasan and Levin tried to depict AIPAC as “right-wing,” as being a front for “Republican billionaires,” and “back[ing] Republican insurrectionists.”

The fact that AIPAC endorses those Levin describes as “Republican insurrectionists” has nothing to do with January 6, 2021. If AIPAC was focused on endorsing “Republican insurrectionists,” then questions would arise about the very lengthy list of outspoken Democratic critics of the Republican Party’s handling of January 6 that AIPAC has also endorsed. Both Adam Schiff and Elaine Luria – Democratic members of the “House Select Committee on the January 6 Attack” – are endorsed by AIPAC.

AIPAC is focused on endorsing those candidates who support AIPAC’s mission: “policies that create a strong, enduring and mutually beneficial relationship with our ally Israel.” Inevitably, the bipartisan list of candidates AIPAC supports will include individuals who strongly disagree with each other on many unrelated topics.

That AIPAC remains focused on its original mission, setting aside the many other ideological battles painting the American political scene these days, is of course open to criticism. Yet Hasan and Levin twist reality to turn AIPAC’s focused mission into a nefarious conspiracy of an organization perceived as “Jewish” and evil billionaires “poisoning American politics.”

It’s a depiction that flies in the face of the facts, but increasingly that has become Mehdi Hasan’s style, which focuses on creating dubious narratives through a thousand omissions, both big and small.

At a certain point, when a discussion throws important facts aside in favor of a narrative that points at a perceived Jewish organization as “corrupting,” “poisoning,” and “dominating” a country’s politics, it begins to reek of a certain phenomenon known as “antisemitism.” No amount of tokenizing a “really Jewish” congressman can paper over that.