The Atlantic, a century-and-a-half-old, well-respected publication, now includes on its website a video series that it describes as, “a showcase of cinematic short documentary films, curated by The Atlantic.” On Tuesday, February 11, the publication posted Mahdi Fleifel’s “I Signed the Petition, and Now I’m Freaking Out,” produced by Nakba Filmworks, and it quickly moved up to the list’s most-watched spot.

The introduction to this video, written by Emily Buder, relays that it captures an actual conversation between filmmaker Fleifel and a friend named Faris who lives in the UK. In the course of the conversation, Faris makes wild claims about Israel that are not only untrue, they are so farfetched that they veer into conspiracy theory territory.

The film begins with Fleifel calling his friend Faris, and waking him up due to the time difference between their locations; we are treated to overhearing Faris in the bathroom early in the film. Gritty shots of what is presumably Fleifel’s apartment are interspersed with black and white footage – of what exactly, we don’t know – as well as more modern protest scenes and scenes of desolate streets and houses. The audio of the conversation plays over these scenes, and we never see images of either Fleifel or Faris.

The subject of the call, and the backdrop for the baseless accusations, is Fleifel’s anxiety over having signed a petition asking the band Radiohead not to play a concert in Israel. He is afraid that, having signed the petition, he will be “red-flagged” and not allowed into what he refers to as “Palestine” in the future.

But it doesn’t take long for the conversation to veer into conspiracy theory territory. At about 3 minutes in, Faris says, “the program of ethnic cleansing is carrying on, and the Israelis keep telling us openly that the job will be finished at some point, including all the Palestinians inside Israel and everywhere else.” The claim that Israel is engaging in ethnic cleaning, while baseless, is a common one in anti-Israel circles and a staple of the antisemitic boycott, divestment, and sanctions movement (BDS). Faris, however, takes the canard a step further, claiming that Israel is – openly – planning to ethnically cleanse Palestinians not only in Israel, but also “everywhere else.” How Israel plans to accomplish such a feat, he doesn’t say.

It gets worse. Closer to the end, Fleifel wonders why he “poke[d] the bear,” with the “bear” obviously being a metaphor for Israel. Faris then tells him, “the bear is behind every regional war that’s happened in the last 70 years, pushing a sectarian agenda. The bear has got you so f***ed, that you don’t know left from right.”

Really? Israel is behind the civil war in Syria? Behind Iran and Saudi Arabia’s proxy war in Yemen? Behind Iraq’s 1990 invasion of Kuwait?

This is simply an unhinged conspiracy theory, one worthy of noted antisemites like Henry Ford, Mel Gibson, or David Icke. Yet not only did the Atlantic choose to feature it, it’s in a film labelled a “documentary.” 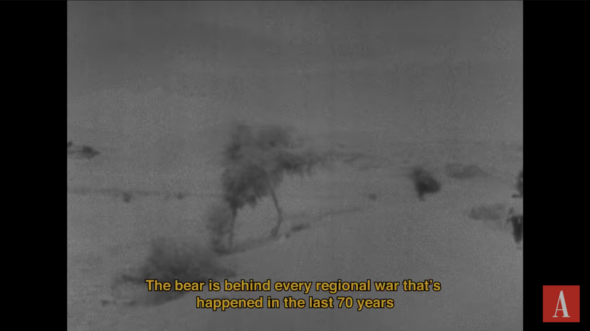 Incredibly, Faris claims, “in reality, most people in Europe think that Palestinians are Islamist cockroaches that need to be stamped out. That’s what most people have been fed in the news.” Of course, anyone who follows the work of CAMERA affiliates UK Media Watch, BBC Watch, and ReVista de Medio Oriente knows that this is the opposite of the truth.

What’s far more common in the media is the victimhood narrative that the film embraces when Faris tells his friend, “as a Palestinian, you’re already so beaten down … it’s a state of occupation and terror,” and that “you’re trying to articulate that you have some agency, whereas in true reality, you’re absolutely powerless.”

The film, of course, also includes the de rigueur false comparison of Israel with South Africa, without which the BDS movement would not have much to go on.

Buder’s introduction strongly implies that this is a real recording of a spontaneous conversation. Curiously, however, Faris gets another call just in time for the credits to begin to role at exactly ten minutes into the film. It seems odd, too, that Fleifel just happened to record it. All of which raises the question, what, exactly, makes this bundle of conspiracy theories qualify as a documentary? And why would the Atlantic consider this hateful drivel worthy of its platform?